Tarot Spreads - The Success Tarot Card Spread. A Tarot Journal: Spreads. When I began reading tarot, I learned, as many tarot newbies do, to use the Celtic Cross spread. 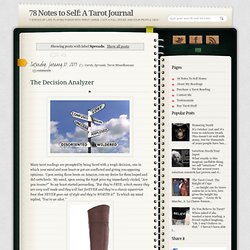 It's a 10-card spread that has been a staple of tarot reading at least since Arthur Waite published it, but he claimed it had been used among tarot readers long before he brought it to the masses. The spread is fairly general, but useful, and gives a lot of information, even some you may not need. A lot of people have difficulty with the Celtic Cross Spread. Some say it has too many cards, others say it's too general and doesn't answer the questions specifically enough. Business Tarot Spread.

Finding a career and making money are always important issues in life. 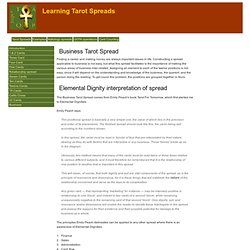 Constructing a spread applicable to business is not easy, but what this spread facilitates is the importance of making the various areas of business inter-related. Assigning an element to each of the twelve positions is not easy, since it will depend on the understanding and knowledge of the business, the querent, and the person doing the reading. To get round this problem, the positions are grouped together in fours. The Business Tarot Spread comes from Emily Peach's book Tarot For Tomorrow, which first alerted me to Elemental Dignities.

Emily Peach says: Learning the Tarot: Five Card Spread Layout. Here are a handful of spreads to experiment with. 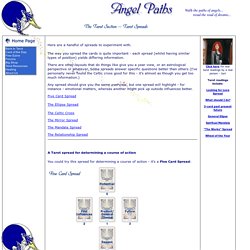 The way you spread the cards is quite important - each spread (whilst having similar types of position) yields differing information. There are other layouts that do things like give you a year view, or an astrological perspective or whatever. Some spreads answer specific questions better than others (I've personally never found the Celtic cross good for this - it's almost as though you get too much information.) Any spread should give you the same overview, but one spread will highlight - for instance - emotional matters, whereas another might pick up outside influences better. Tarot Spreads. MyTarotSpreads.com - An Annikin Website.

About Tarot Spreads. The following is a set of general guidelines for you to get a feel for how to understand and use the tarot spreads and oracle layouts on this site. 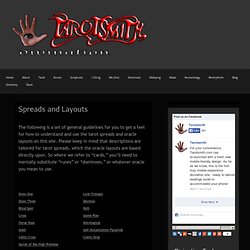 Please keep in mind that descriptions are tailored for tarot spreads, which the oracle layouts are based directly upon. So where we refer to “cards,” you’ll need to mentally substitute “runes” or “dominoes,” or whatever oracle you mean to use. Elemental Dignity vs Reversals With decks on this site that do not use reversals (most of them), you may use the traditional occult method of checking elemental dignity to determine whether each card is well-dignified or ill-dignified. Each card’s dignity is based upon how the adjacent cards relate to it. Since Rider-Waite inspired decks generally use reversals, interpretation of dignity is automatic with these deck. On the other hand, you may decide to simply disregard the elemental dignities if they give you too much trouble. Draw Just One Difficulty: Easiest Past, Present, and Future. Inner-self Spread. "Inner Self" being the working title, I have based this spread on Carl Jung's dream archetypes. 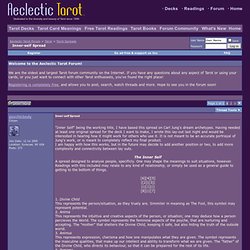 Having needed at least one original spread for the deck I want to make, I wrote this lay-out last night and would be interested in hearing how it might work for others who use it. It is not meant to be an accurate portrayal of Jung's work, or is meant to completely reflect my final product. I am happy with how this works, but in the future may decide to add another position or two, to add more complexity and connectivity between lay outs. 12 Tarot card Astrology Spread. Astrology and Tarot combined creates a unified whole. 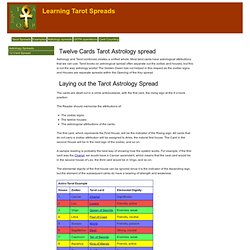 More help ~ Romani Star?? Infinity: Life Lessons. The Tetractys Spread. The Tetractys is a triangular figure consisting of ten points arranged in four rows: one, two, three, and four points in each row. 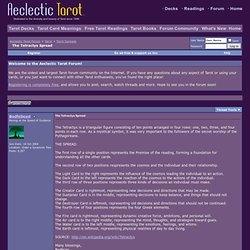 Tetraktys Spread « Starweaver’s Corner. This article on the tetraktys tarot spread is reprinted from an earlier incarnation of my web site. 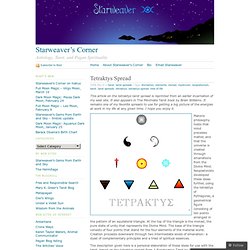 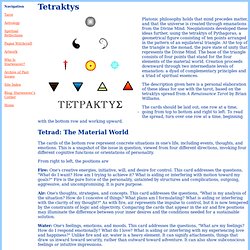 Neoplatonists developed these ideas further, using the tetraktys of Pythagoras, a geometrical figure consisting of ten points arranged in the pattern of an equilateral triangle. Harsh Truths Spread. I developed this spread as a way to get clear and objective information about situations, to keep the cards from simply telling me what I want to hear, and to clearly differentiate hopes, fears, and the truth. 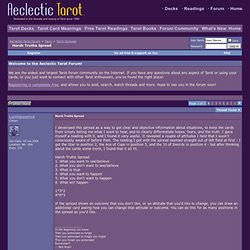 I gave myself a reading with it, and I found it very useful. It revealed a couple of attitudes I held that I wasn't consciously aware of before then. The reading I got with the spread seemed straight out of left field at first - I got the Star in position 2, the Ace of Cups in position 5, and the 10 of Swords in position 4 - but after thinking about the cards some more, I found that it all fit. Harsh Truths Spread 1. What you want to see/believe 2. If the spread shows an outcome that you don't like, or an attitude that you'd like to change, you can draw an additional card asking how you can change that attitude or outcome.

The Clock. This is a numerology based spread that I created. It is based on the numbers of a clock, hence why it is clock shaped. It's supposed to be shaped like a clock bur its hard to align right on a phone, lol. Chakra spread...bigger than life.