Why People Care More About Pets Than Other Humans. We love our pets. 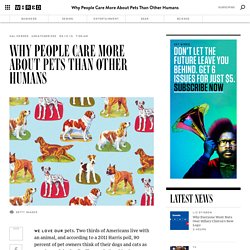 Two thirds of Americans live with an animal, and according to a 2011 Harris poll, 90 percent of pet owners think of their dogs and cats as members of the family. These relationships have benefits. For example, in a survey by the American Animal Hospital Association, 40 percent of married female dog owners reported they received more emotional support from their pet than from their husband or their kids.

The pet products industry calls this “the humanization of pets.” One of my colleagues recently spent $12,000 on cancer treatments for her best friend Asha, a Labrador retriever. Hal Herzog About Hal Herzog is Professor of Psychology of at Western Carolina University and author of Some We Love, Some We Hate, Some We Eat: Why It’s So Hard To Think Straight About Animals. Newspaper editors tell me stories about animal abuse often generate more responses from upset readers than articles about violence directed toward humans.

Take, for example, police shootings. 10 Things About Finland That Shock First-time Visitors. What comes to mind when you think about Finland? 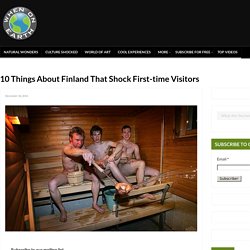 A dark and cold country with long-haired locals playing metal songs while walking on a snowy forest? You might be a bit right on that (just kidding). Finland is known to be “shy” but it’s just too humble to tell the world the amazing stuff it offers – that’s for you to discover! If you plan to visit Finland soon, here’s a starter guide to knowing a bit about the country and its people: 1. Finnish Saunas have been part of the Finnish culture for centuries. Males and females are always separated or they take turns when using the sauna, and everyone in the hot room will be naked. 2. There will be chances that you’ll see some Finns walking with their ski poles, but their skis missing. 3.

The Finns are known to be heavy alcohol drinkers among the Nordic countries, with most of them consuming an equivalent of slightly ten liters of pure alcohol per person per year. 4. 5. Everyone in Europe thinks Germany is the hardest working country... apart from Greece. Greece is in big trouble. 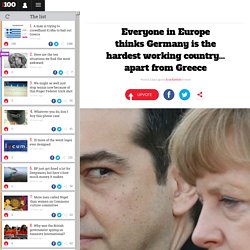 The country became the first developed economy to ever miss a debt repayment to the IMF on Tuesday night. After months of tense negotiations with its creditors a bailout from the eurozone looks increasingly unlikely and politicians across the continent are becoming more and more hostile towards the Syriza government. While the root of Greece's turmoil is complicated, one of the accusations aimed at it is that its employment sector needs a severe overhaul. While claims that "Greeks are lazy" can be written off with cold, hard statistics, perhaps the difference of opinion between the country and its European neighbours is most strikingly summed up by this table: The Pew Research Center surveyed eight EU countries as part of its 2012 and 2013 Global Attitudes surveys and found that they all assume Germans are the hardest working and most trustworthy, apart from Greeks who think Greeks are the hardest working and most trustworthy.

In Photos: The Most Ridiculous Laws in America. In Nevada it is illegal for men who have mustaches to kiss women. 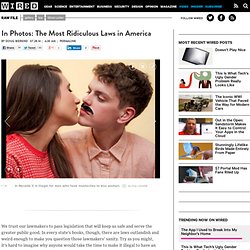 Olivia Locher In Florida a person may not appear in public clothed in liquid latex. In New Jersey a person can be arrested for slurping soup in public. In New Hampshire you can’t tap your foot or nod your head to keep time to music. In Rhode Island it is illegal to wear transparent clothing. In Oregon one may not test their physical endurance while driving a car on a highway. In Kansas it’s illegal to serve wine in teacups. In Maine it’s unlawful to tickle women under the chin with a feather duster. In Pennsylvania it’s illegal to go fishing with dynamite. In Alabama it is illegal to have an ice cream cone in your back pocket at all times. In Ohio it’s illegal to disrobe in front of a man’s portrait. In Connecticut pickles must bounce to officially be considered pickles.