10 of the best small UK towns for winter breaks. Bakewell, Derbyshire You’d expect the home of the Bakewell pudding to know a thing or two about keeping its visitors cosy and well-fed, and in this attractive market town, you’re never more than a few steps away from a tea room or pub. 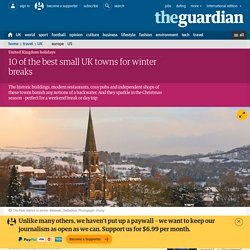 And to walk off all the cake and ale, the spectacular Peak District is on the doorstep. In the run-up to Christmas, the town will be hosting a traditional Christmas market to coincide with its lights switch-on (26 & 27 Nov) and, new for 2016, a Winter Wonderland event (18-20 Nov and 9-11 Dec, advance tickets £5, under-fives free, bakewellshow.org), at the Bakewell Showground, with Christmas grotto, craft marquee, reindeer, market stalls, ice rink, funfair and fireworks. For something more sedate, check out the candlelit tours of Haddon Hall (selected dates 7–13 Dec, £22pp), a romantic medieval manor house which has starred in countless films.

Bradford on Avon, Wiltshire This pint-size town deserves more attention than it gets. 17 Jaw Dropping British Hikes You Must Do Before You Die. 10 of the best easy walks in south Cornwall. Porthcurno to Logan Rock Distance 1 mile Start Porthcurno car park, grid ref SW288223 National Trust downloadable route and map. 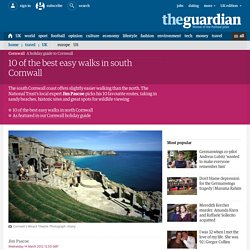 10 LESSER-KNOWN INSPIRATIONAL WOMEN FROM HISTORY WHO ‘MADE IT HAPPEN’ - English Heritage Blog. In part one of Sam Kinchin-Smith’s rundown of some of the less well-known awesome females from the histories of our places, he considers an abbess, a widow, a mystic, a Royalist and an enthusiastic house-builder… Stories of strong women from history usually fall into three clichéd shapes: famous queens; women who are celebrated for being somebody’s wife, mother, daughter or sister; and the ‘she-wolves’ narrative of fierce royal females pulling the political strings whatever the consequences – and for medieval women, ‘the consequences’ were usually pretty dire. 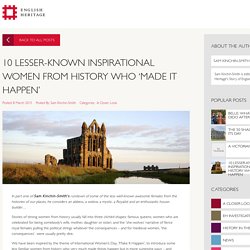 We have been inspired by the theme of International Women’s Day, ‘Make It Happen’, to introduce some less familiar women from history who very much made things happen but in more surprising ways – and therefore represent a rather different strand of women’s history. These are the stories of women who got things done. MEMBER RECOMMENDED: THORNTON ABBEY AND GATEHOUSE - English Heritage Blog. Thornton Abbey’s enormous and ornate fortified gatehouse is the largest and among the finest in England. 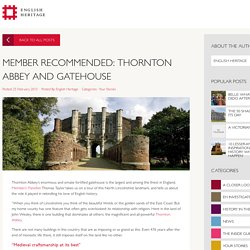 Members’ Panellist Thomas Taylor takes us on a tour of this North Lincolnshire landmark, and tells us about the role it played in rekindling his love of English history. Uncommon Ground: a word-lover's guide to the British landscape. Best Beaches in the United Kingdom - Travellers' Choice Awards. Ten inspiring walks for 2015. Last year we hiked up and down the length of Britain to find the best routes to walk - and we found them. 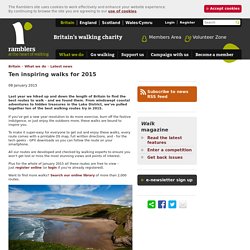 From windswept coastal adventures to hidden treasures in the Lake District, we’ve pulled together ten of the best walking routes try in 2015. If you’ve got a new year resolution to do more exercise, burn off the festive indulgence, or just enjoy the outdoors more, these walks are bound to inspire you. To make it super-easy for everyone to get out and enjoy these walks, every route comes with a printable OS map, full written directions, and - for the tech geeks - GPX downloads so you can follow the route on your smartphone. All our routes are developed and checked by walking experts to ensure you won’t get lost or miss the most stunning views and points of interest. Plus for the whole of January 2015 all these routes are free to view – just register online (or login if you're already registered).

100 National Trust routes. Top 10 Castles. Royal visits, wars and ghosts; our castles have seen them all. 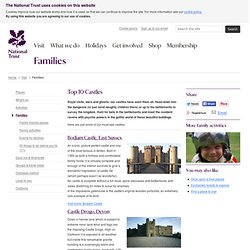 Head down into the dungeons (or just send naughty children there) or up to the battlements to survey the kingdom. Hunt for bats in the battlements and meet the resident ravens with psychic powers in the gothic world of these beautiful buildings. Bodiam Castle, East Sussex An iconic, picture perfect castle and one of the most famous in Britain.

Built in 1385 as both a fortress and comfortable family home, it is virtually complete and enough of the interior survives to give a wonderful impression of castle life (which perhaps wasn’t so wonderful). Visit iconic Bodiam Castle Castle Drogo, Devon. Unsung corners of Britain. Guest Long Read: A Journey To the Top 10 Favorite English Cathedrals - Which is Your Favorite? Names of Britain: 10 British Villages with Unique (and often rude) Names and How They Got Them. Anglotopia.net - The Website for People Who Love Britain - Anglophiles. The beauty of the UK's loneliest bus stops. 16 February 2014Last updated at 20:04 ET By Duncan Walker BBC News Magazine The Magazine recently visited an isolated, slate-roofed shelter in rural Cumbria and asked whether it was the UK's loneliest bus stop.

A number of readers suggested even more solitary alternatives. Serving the village of Milburn in the Eden Valley, England's most sparsely populated area, the Cumbrian stop might see "the odd walker in summer, but nobody now", according to one driver. But locals suggested it might be used by as many as six or seven passengers a week. But it faces stiff competition. A selection of their nominations is below. The Shaun the Sheep stop - North York Moors On the northern edge of the North York Moors National Park sits a decaying brick shelter set "in splendid isolation at a road junction in the middle of nowhere", says transport information officer Di Wright.

What Britain's county dialects can tell us about the national character. The Fiver: Top Five Famous Manor Houses Used in Film and Television. Ten Beautiful Cathedrals and Churches in the UK.

Going Underground in England. Unmissable sea views. ‘As the westering sun drops over the cliffs the shadows of night start to play on the darkening water. 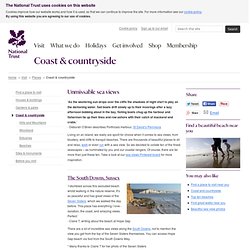 Sail boats drift slowly up to their moorings after a lazy afternoon bobbing about in the bay, fishing boats chug up the harbour and fishermen tie up their lines and row ashore with their catch of mackerel and crabs.’- Deborah O’Brien describes Porthclais Harbour, St David’s Peninsula Living on an island, we really are spoilt for choice when it comes to sea views; from blustery, wild cliffs to tranquil beaches. There are thousands of beautiful places to sit and relax, walk or even run with a sea view.

London and the U.K. From Above - In Focus. Photographer Jason Hawkes has been making fascinating aerial images since 1991. 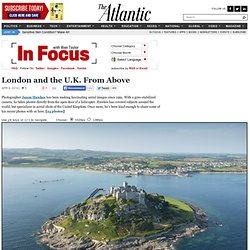 With a gyro-stabilized camera, he takes photos directly from the open door of a helicopter. Hawkes has covered subjects around the world, but specializes in aerial shots of the United Kingdom. Once more, he's been kind enough to share some of his recent photos with us here. [24 photos] 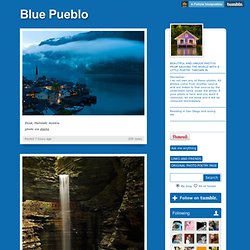 Silly walks. Car free walks. We have teamed up with the Car Free Walks website to bring you a range of walks through beautiful National Trust countryside. 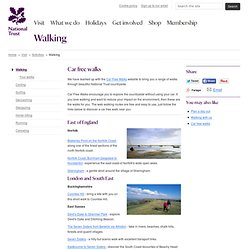