i4j.info. Five Majors That Let You Survive in the Double Dip Recession. The Great Freelancer Movement: 8 Reasons Why your Next Job will be a Project. By 2025, over 75% of the workforce will be comprised of Millennials, a group many refer to as the Facebook generation. 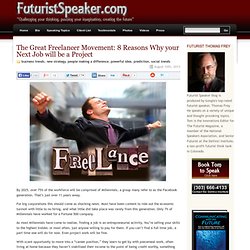 That’s just over 11 years away. For big corporations this should come as shocking news. 6 Ways To Save U.S. Startups And Jobs From Death By Regulation. Declining Industries vs Growing Jobs: What the WaPo Deal Tells Us About Innovation : Progressive Policy Institute. Does innovation create or destroy jobs? 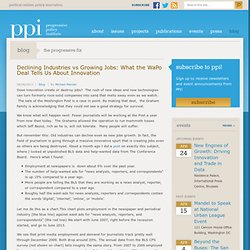 The rush of new ideas and new technologies can turn formerly rock-solid companies into sand that melts away even as we watch. The sale of the Washington Post is a case in point. By making that deal, the Graham family is acknowledging that they could not see a good strategy for survival. 10 Surprising Marketing Job Titles For The Next 10 Years.

The Rise of the Supertemp. Ed Trevisani hangs with his young sons when they come home from school. 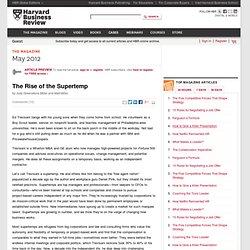 He volunteers as a Boy Scout leader, serves on nonprofit boards, and teaches management at Philadelphia-area universities. He’s even been known to sit on the back porch in the middle of the workday. Not bad for a guy who’s still pulling down as much as he did when he was a partner with IBM and PricewaterhouseCoopers. Armies of Expensive Lawyers, Replaced by Cheaper Software. August Employment Report: 96,000 Jobs, 8.1% Unemployment Rate. By Bill McBride on 9/07/2012 08:30:00 AM From the BLS: Total nonfarm payroll employment rose by 96,000 in August, and the unemployment rate edged down to 8.1 percent, the U.S. 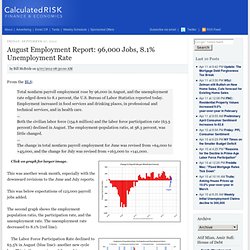 Bureau of Labor Statistics reported today. Employment increased in food services and drinking places, in professional and technical services, and in health care. ... Both the civilian labor force (154.6 million) and the labor force participation rate (63.5 percent) declined in August. Click on graph for larger image. This was another weak month, especially with the downward revisions to the June and July reports. This was below expectations of 125,000 payroll jobs added. The second graph shows the employment population ratio, the participation rate, and the unemployment rate. The Labor Force Participation Rate declined to 63.5% in August (blue line)- another new cycle low.

The Employment-Population ratio declined to 58.3% in August (black line). Choosing-a-career-Large.jpg 2,338×1,800 pixels. Which USA do you work in ? How Social Currency Is Driving Identity, Trust and New Industries. Editor’s Note: Markus Barnikel joined carpooling.com as CEO in 2011, in order to expand into new countries and make carpooling a convenient transportation option for all. 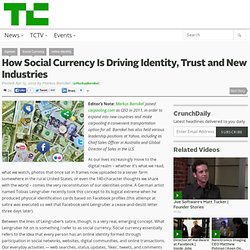 Barnikel has also held various leadership positions at Yahoo, including as Chief Sales Officer in Australia and Global Director of Sales in the U.S. As our lives increasingly move to the digital realm – whether it’s what we read, what we watch, photos that once sat in frames now uploaded to a server farm somewhere in the rural United States, or even the 140-character thoughts we share with the world ­­– comes the very reconstitution of our identities online. Future - Technology - Robot swarms aim to bring buildings to life. Meet the man who wants to create architecture that understands everything about us – down to our emotional states – and learns from its mistakes. 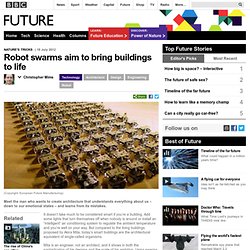 It doesn’t take much to be considered smart if you’re a building. Add some lights that turn themselves off when nobody is around or install an “intelligent” air conditioning system to regulate the ambient temperature and you’re well on your way. But compared to the living buildings proposed by Akira Mita, today’s smart buildings are the architectural equivalent of single-celled organisms. What Does Work Look Like When Half of Americans Are Not In A Job? The world at work: Jobs, pay, and skills for 3.5 billion people. Over the past three decades, as developing economies industrialized and began to compete in world markets, a global labor market started taking shape. 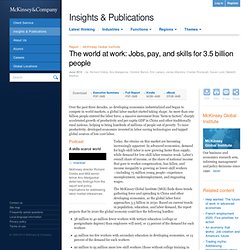 As more than one billion people entered the labor force, a massive movement from “farm to factory” sharply accelerated growth of productivity and per capita GDP in China and other traditionally rural nations, helping to bring hundreds of millions of people out of poverty. To raise productivity, developed economies invested in labor-saving technologies and tapped global sources of low-cost labor. Podcast A skills-scarce world. Is Your Job Robot-Proof? The Long March from Crowdsourcing to a Global Meritocracy. OK, this isn't working anymore. 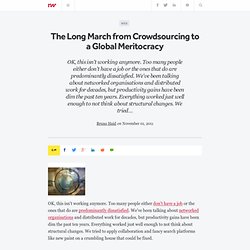 Too many people either don't have a job or the ones that do are predominantly dissatisfied. We've been talking about networked organisations and distributed work for decades, but productivity gains have been dim the past ten years. Who Should be Your Chief Collaboration Officer? - Morten T. Hansen and Scott Tapp. By Morten T. 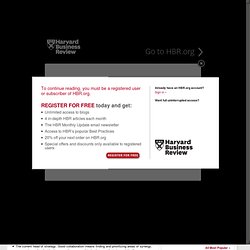 Hansen and Scott Tapp | 8:59 AM October 11, 2010 Companies need an executive responsible for integrating the enterprise — a Chief Collaboration Officer (CCO). Increasingly, companies are embracing collaboration as part of their strategy to grow, by cross-selling products to existing customers and innovating through the recombination of existing technologies. But this won’t work unless employees work effectively across silos — across sales offices, business units, sales, product development, and marketing. Why Your Company Needs A Chief Collaboration Officer. Collaboration. 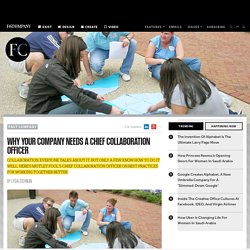 It’s a $1 billion industry, according to an ABI Research study on worker mobility and enterprise social collaboration. The Global Talent Crisis. How To Find Meaningful Work. It’s a phenomenon that has become increasingly apparent over the last five years: For many people, the ideal job has morphed from one that offers lots of money to one that offers meaning--and a competitive salary doesn’t hurt, either. It isn’t just that people are rejecting jobs at large financial institutions with questionable morals (see this New York Times article on Wall Street’s campus recruiting crisis). A Jobs Compact for America's Future. Idea in Brief Three realities stand in the way of building the stronger human capital that U.S. business and the U.S. economy need. Competing on—and investing in—human capital is often not in the short-term interest of individual companies.

Strategies and practices aimed at achieving both high productivity and high wages are not spreading widely across companies and industries. Little constructive dialogue about elevating human capital as a source of competitive advantage takes place among key stakeholder groups: the business community, government, labor, and others. Call in the sensemaker, the future isn't working. For London Youth, Down and Out Is Way of Life. Will these 10 jobs disappear in 2012? Discover your passion. 2 Billion Jobs to Disappear by 2030. Jobs Outlook 2012: Careers Headed For The Dustbin. Disappearing Middle-Class Jobs.