How to increase Productivity & Stuff

100 time, energy, and attention hacks to become more productive. Purpose Your Day: Most Important Task (MIT) By Leo Babauta I’ve mentioned this briefly in my morning routine, but I thought I’d explain a little bit more about MITs – Most Important Tasks. 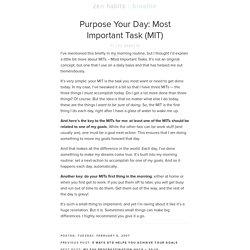 It’s not an original concept, but one that I use on a daily basis and that has helped me out tremendously. It’s very simple: your MIT is the task you most want or need to get done today. In my case, I’ve tweaked it a bit so that I have three MITs — the three things I must accomplish today. Do I get a lot more done than three things?

And here’s the key to the MITs for me: at least one of the MITs should be related to one of my goals. And that makes all the difference in the world. Want to feel more productive? Lower your expectations. Takeaway: Strive to be great at what you do, but don’t be hard on yourself when you’re not. 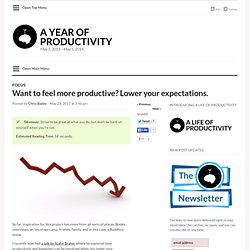 Estimated Reading Time: 56 seconds. So far, inspiration for this project has come from all sorts of places. Want to become more productive? Stop multitasking. Takeaway: Multitasking makes you less productive, and you should create strategies to resist the urge to multitask, like minimizing distractions and checking your email on a schedule. 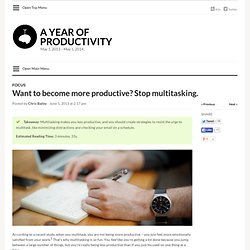 Estimated Reading Time: 3 minutes, 15s. According to a recent study, when you multitask, you are not being more productive – you just feel more emotionally satisfied from your work.1 That’s why multitasking is so fun. Why ‘active listening’ will make you more productive, and how to do it. Takeaway: Actively listening to someone (completely focusing on what they say) makes you more productive, because it lets you develop deeper relationships, become a better judge of people, focus better, avoid misunderstandings, and have more meaningful conversations. 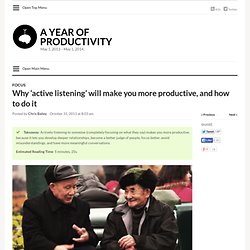 Estimated Reading Time: 5 minutes, 25s. Why you should actively listen Like it or not, there will always be a gap between what you hear, and what someone is trying to say. Language isn’t perfect, and unless you invent a machine for reading minds, language is one of the best tools you have to get inside of someone’s head and understand what they’re thinking and where they’re coming from.

There are two types of listening: passive and active. Interview With Charles Duhigg - New Year’s Resolutions Guidebook. I recently had the opportunity to interview Charles Duhigg about how you can use habits to stick to your New Year’s resolutions. 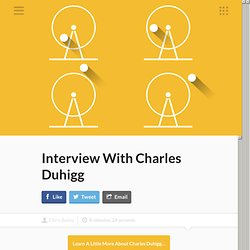 Charles is a Pulitzer prize-winning reporter for the New York Times, and the author of the bestselling book, The Power of Habit. The paperback version is available on store shelves pretty much everywhere today. Guide: Everything you need to start meditating. Takeaway: You will become more productive if you meditate, and this comprehensive guide will teach you how. Estimated Reading Time: 11 minutes, 16s.

My goal with this guide is to give you everything you need to start a meditation practice to become more productive. Meditation is a simple practice, but it’s one that seems intimidating on the surface. How to kick bad habits by making them "more expensive" The Takeaway: If you live with someone, make a pact with them to introduce penalties for foods that are bad for you both. 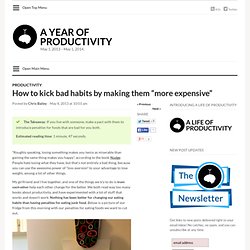 Estimated reading time: 1 minute, 47 seconds. “Roughly speaking, losing something makes you twice as miserable than gaining the same thing makes you happy”, according to the book Nudge. People hate losing what they have, but that’s not entirely a bad thing, because you can use the awesome power of “loss aversion” to your advantage to lose weight, among a lot of other things. My girlfriend and I live together, and one of the things we try to do is train each other help each other change for the better. We both read way too many books about productivity, and have experimented with a lot of stuff that works and doesn’t work. The penalties work because of the power of loss aversion. 3 ways to discover your keystone habits; habits that change everything. Takeaway: Keystone habits create a chain reaction; changing and rearranging your other habits as you integrate the habit into your life. 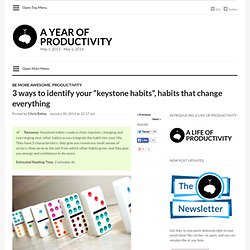 They have 3 characteristics: they give you numerous small senses of victory; they serve as the soil from which other habits grow; and they give you energy and confidence to do more. Estimated Reading Time: 2 minutes, 6s. One of my favorite ideas from Charles Duhigg’s book The Power of Habit is the idea of a “keystone habit”. Keystone habits create a chain reaction; changing and rearranging your other habits as you integrate the habit into your life. Resist any temptation by rehearsing how you'll act ahead of time. Takeaway: Rehearse how you’ll react during a tempting situation to increase your chances of resisting that temptation. 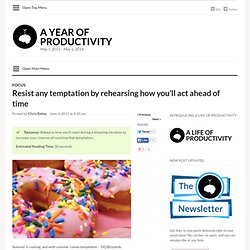 Estimated Reading Time: 50 seconds. Summer is coming, and with summer comes temptation – DQ Blizzards, unhealthy barbecues, and in my case, hoards of beautiful women. Luckily there is one proven way to resist temptation later on – rehearse in your head how you’ll act. Our minds often have a tendency to switch back and forth between what is better for us in the short- and long-term.1 Luckily, if you want to tug your mind to focus more on the longer-term, rehearsing the situation in your head ahead of time works wonders. What advice would you give yourself? Takeaway: People put a lot of weight on advice they receive from other people, but they often forget to ask themselves for advice. 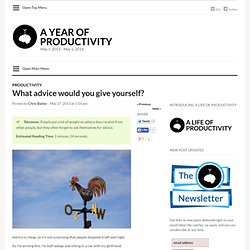 Estimated Reading Time: 1 minute, 24 seconds. Advice is cheap, so it’s not surprising that people dispense it left and right. As I’m writing this, I’m half-asleep and sitting in a car with my girlfriend. We’re driving home from a wedding a day late, because she had an asthma attack and we visited the hospital late last night. Damn cats at my parents house! 9 brain foods that will improve your focus and concentration. Takeaway: To boost your ability to focus, eat/drink more: Blueberries, green tea, avocados, leafy green vegetables, fatty fish, water, dark chocolate, flax seeds, and nuts. 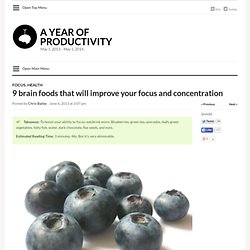 Estimated Reading Time: 3 minutes, 46s. But it’s very skimmable. Food is the fuel that regulates your energy and mood, both of which can significantly affect your focus. How I Became an Early Riser. By Leo Babauta. Is more conflict the key to becoming more productive? The Bottom Line: If you have trouble getting out of bed in the morning, find yourself procrastinating a lot, or feel overwhelmed or discouraged, it’s helpful to be mindful of the amount of stress in your life. If you’re anything like me, you love TED talks and productivity.

So when I was stumbling around on TED.com and found Margaret Heffernan’s talk about productivity, my brain almost ate itself. In a nut, Heffernan is a successful businesswoman who has been the CEO at five large companies, and she has also written books about leadership, women in business, and entrepreneurship. In her great 13-minute talk, she makes the case that we should seek out conflict instead of pushing it away, because conflict makes us much more productive. And, if we happen to run a company or lead a team, we should also create an environment where people see constructive conflict as a good thing.

For whatever reason, people have a natural tendency to shy away from conflict. Why nobody cares (and what makes that amazing) Takeaway: You may have the built-in tendency to overestimate how much strangers care about you, your job, your car, your house, and everything else you have. Estimated Reading Time: 1 minute, 24s. I was recently surfing the popular question-and-answer website Quora where someone posed the question, “What are the top 10 things that we should be informed about in life?” One of the answers in the top response stuck out at me:1 1. Verdict: What you should wear to become as productive as possible. Top 10 things I learned about productivity while living in reclusion. Estimated Reading Time: 7 minutes, 52s. I’ve bolded the golden nuggets if you don’t have that long.