Bill Markley, Writer and South Dakota Historian. The Twelve Best Western Movies of all Time – Michael R. Ritt. Admittedly, any list purporting to be the “best” of anything is going to be subjective and this list is no exception. 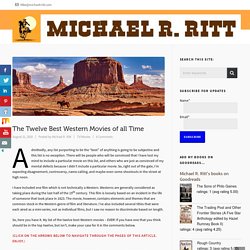 There will be people who will be convinced that I have lost my mind to include a particular movie on this list, and others who are just as convinced of my mental defects because I didn’t include a particular movie. So, right out of the gate, I’m expecting disagreement, controversy, name-calling, and maybe even some shootouts in the street at high noon. I have included one film which is not technically a Western. Westerns are generally considered as taking place during the last half of the 19th century. This film is loosely based on an incident in the life of someone that took place in 1823. So, here you have it. Wild West Living - Western Decor, Bedding, Accessories, Gifts & More. 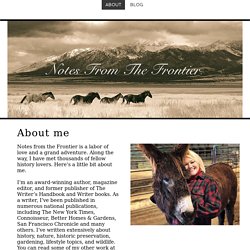 Along the way, I have met thousands of fellow history lovers. Here's a little bit about me. I’m an award-winning author, magazine editor, and former publisher of The Writer’s Handbook and Writer books. As a writer, I’ve been published in numerous national publications, including The New York Times, Connoisseur, Better Homes & Gardens, San Francisco Chronicle and many others. I’ve written extensively about history, nature, historic preservation, gardening, lifestyle topics, and wildlife. I grew up in Iowa farm country with horses and all kinds of critters, loved nature and spent my youth horseback riding on country gravel roads, retracing old stagecoach trails, forgotten pioneer graveyards, Indian mounds in the woods, and looking for arrowheads. My childhood horse, Sundance. Here I am with Rosie, the watch mule, who is a resident at Holyland Donkey Rescue in Wisconsin.

Mavericks Custom Hats & Restoration - Accueil. Chapeau, casquette & vêtement de Stetson. Boot Rugs- Boot Covers – Boot Rugs® What Cowboys Carried in the Old West to Help Them Survive. In our today’s world, having to implement survival strategies under difficult circumstances is something that we could very well have to do. 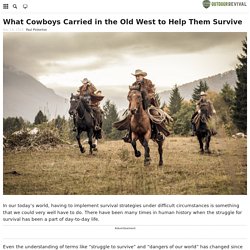 There have been many times in human history when the struggle for survival has been a part of day-to-day life. Even the understanding of terms like “struggle to survive” and “dangers of our world” has changed since times past. Today, when we talk about the struggle to survive, we’re often referring to financial difficulties; but that’s not how it has always been. For much of human history, the risk wasn’t of being thrown out of your house but of dying. One such time in our country’s history was what we know of as the Old West. One such group was the American cowboys, who worked largely alone facing dangerous semi-wild animals in a dangerous environment mounted on half-broke dangerous horses with the constant risk of attack from rustlers and Indians.

Every time one of these men rode away from the ranch house, it could well have been their last. Guns. A Day In The Life Of A Chuck Wagon Cook. The chuck wagon cook’s normal day started hours before the cowhands climbed out of their bedrolls. 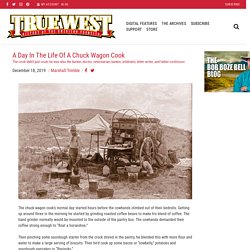 Getting up around three in the morning he started by grinding roasted coffee beans to make his blend of coffee. The hand grinder normally would be mounted to the outside of the pantry box. The cowhands demanded their coffee strong enough to “float a horseshoe.” Then pinching some sourdough starter from the crock stored in the pantry, he blended this with more flour and water to make a large serving of biscuits. Then he’d cook up some bacon or “sowbelly,” potatoes and sourdough pancakes or “flapjacks.”

A typical herd consisted 1,500-2,000 head of cattle and a typical outfit comprised a trail boss, ten to fifteen cowhands and each had a string of five to ten horses. The chuckwagon didn’t travel with the herd. The noon meal was pretty meager, usually whatever was left from breakfast was warmed up and served. Related Posts. Home - Kent Rollins. Drifters - Art of Play. The Everything! Tim Cox Fine Art.