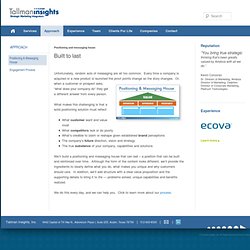 Every time a company is acquired or a new product is launched the proof points change so the story changes. Or, when a customer or prospect asks, “what does your company do” they get a different answer from every person. What makes this challenging is that a solid positioning solution must reflect: What customer want and value mostWhat competitors lack or do poorlyWhat’s credible to claim or reshape given established brand perceptionsThe company’s future direction, vision and strategyThe true substance of your company, capabilities and solutions We’ll build a positioning and messaging house that can last – a position that can be built and reinforced over time. We do this every day, and we can help you. B2B STORYTELLING. If you want to present in harmony with the seven C’s, then a message house is a great and simple tool for defining and structuring your messages, synchronizing them with others and making them remembered by your audience. 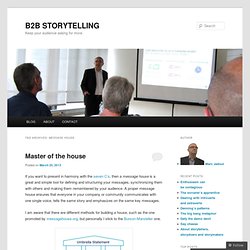 A proper message house ensures that everyone in your company or community communicates with one single voice, tells the same story and emphasizes on the same key messages. I am aware that there are different methods for building a house, such as the one promoted by messagehouse.org, but personally I stick to the Burson-Marsteller one. It has a three-layered architecture, and looks more like an ancient Greek temple than the homes in the street where I live. When properly constructed, it is almost straightforward to transform this message house into a skeleton for your presentation. The umbrella statement translates to an opening statement that will trigger interest for your key messages.

Umbrella statement: Key messages: Foundation (examples): Like this: Like Loading... How to Pitch Anything in 15 Seconds [video] Burson-Marsteller. Burson-Marsteller is a global public relations and communications firm headquartered in New York City. 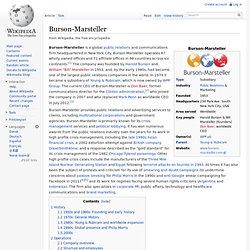 Burson-Marsteller operates 67 wholly owned offices and 71 affiliate offices in 98 countries across six continents.[1] The company was founded by Harold Burson and William "Bill" Marsteller in 1953, and, by the early 1980s, had become one of the largest public relations companies in the world. In 1979 it became a subsidiary of Young & Rubicam, which is now owned by WPP Group. The current CEO of Burson-Marsteller is Don Baer, former communications director for the Clinton administration,[2] who joined the company in 2007 and who replaced Mark Penn as worldwide CEO in July 2012.[3] Burson-Marsteller provides public relations and advertising services to clients, including multinational corporations and government agencies.

Burson-Marsteller is primarily known for its crisis management services and political lobbying. History[edit] 1950s and 1960s: Founding and early history[edit] 2000s[edit] How to make a Message House. The Message House Method is a simple but effective way of creating a higher performing communications culture for organizations as a whole, and for specific projects. 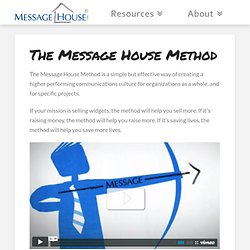