How to Use the Golden Ratio in Design (with Examples) Want to be on the same creative level as Leonardo Da Vinci, Salvador Dali and the designers of the Parthenon? 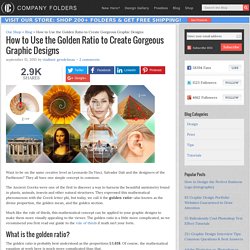 They all have one simple concept in common. The Ancient Greeks were one of the first to discover a way to harness the beautiful asymmetry found in plants, animals, insects and other natural structures. They expressed this mathematical phenomenon with the Greek letter phi, but today, we call it the golden ratio—also known as the divine proportion, the golden mean, and the golden section. Much like the rule of thirds, this mathematical concept can be applied to your graphic designs to make them more visually appealing to the viewer. The golden ratio is a little more complicated, so we recommend you first read our guide to the rule of thirds if math isn’t your forte. Recipes with Fractions. 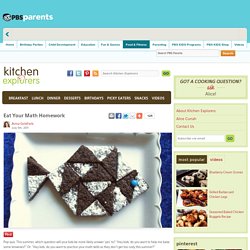 This summer, which question will your kids be more likely answer ‘yes’ to? “Hey kids, do you want to help me bake some brownies?” Or: “Hey kids, do you want to practice your math skills so they don’t get too rusty this summer?” I’m guessing that a whole lot more kids will jump at the chance to bake brownies over practicing math. But guess what? Cooking by Numbers. Not all people are chefs, but we are all eaters. 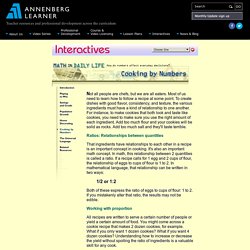 Most of us need to learn how to follow a recipe at some point. To create dishes with good flavor, consistency, and texture, the various ingredients must have a kind of relationship to one another. For instance, to make cookies that both look and taste like cookies, you need to make sure you use the right amount of each ingredient. Add too much flour and your cookies will be solid as rocks. Add too much salt and they'll taste terrible. Project: Let’s Get Cooking. 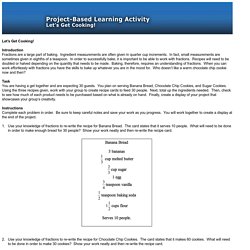 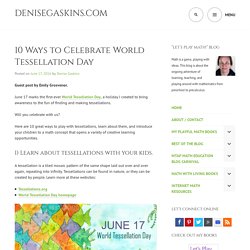 June 17 marks the first-ever World Tessellation Day, a holiday I created to bring awareness to the fun of finding and making tessellations. Will you celebrate with us? Here are 10 great ways to play with tessellations, learn about them, and introduce your children to a math concept that opens a variety of creative learning opportunities. 1) Learn about tessellations with your kids. A tessellation is a tiled mosaic pattern of the same shape laid out over and over again, repeating into infinity.

Search TES Resources. The Fibonacci number sequence has been astonishing and baffling mathematicians, nature lovers, scientists and the curious mind for ions. 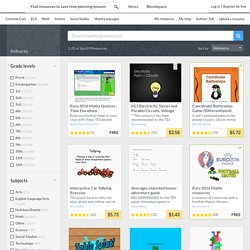 This number sequence was introduced by medieval, Italian, mathematician Leonardo of Pisa in his 1202 book, Liber Abaci (Book of Calculation). Along with the Hindu-Arabic numerals, which we use today (0 – 9), he introduced the east Indians use of the Fibonacci sequence through a famous problem about rabbit population growth. The sequence was named after him by number theorist Edouard Lucas in the 19th century. The number sequence is achieved by adding each of two subsequent numbers together to acquire the next number. It begins with 0 or 1, but the east Indians preferred to start with 1. Let’s not use 21st century technology with 19th century pedagogy. Technology may be changing but classrooms and teaching methods are pretty much unchanged since this picture was taken (Creative Commons image) By Larry Magid In a talk at the National PTA Conference in Charlotte, NC, Thomas Murray, State and District Digital Learning Policy and Advocacy Director for Alliance for Education, reminded me of what’s been bothering me for years. 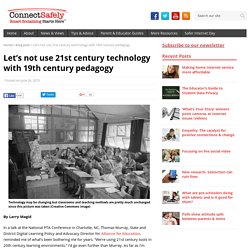 Archive. Search page. Projects. EduCanon. The best 10 free programs for mathematics (Part I) 13 Art and Math Projects for Kids - The Art Curator for Kids. Untitled. Attack on the pentagon results in discovery of new mathematical tile. In the world of mathematical tiling, news doesn’t come bigger than this. 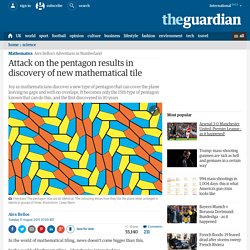 In the world of bathroom tiling – I bet they’re interested too. If you can cover a flat surface using only identical copies of the same shape leaving neither gaps nor overlaps, then that shape is said to tile the plane. Every triangle can tile the plane. Every four-sided shape can also tile the plane. Cool Math Games for Kids & Fun Math Activities. Home - Mascil Mathematics and Science for Life. Open mathematics. Strategy Games at Coolmath-Games.com. Talks for people who hated math in high school. Math for love. Welcome to the Math for Love Curriculum page. 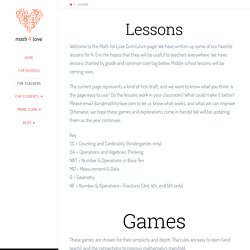 We have written up some of our favorite lessons for K-5 in the hopes that they will be useful to teachers everywhere. We have lessons charted by grade and common core tag below. Middle school lessons will be coming soon. Educational Computer Games and Apps for Kids. MEDIAN Don Steward secondary maths teaching: sh... Racionalni brojevi. 20+ Photos Of Geometrical Plants For Symmetry Lovers. Using Google Apps in a Math Classroom. Khan Academy. Alpha App for iPhone or iPod touch. 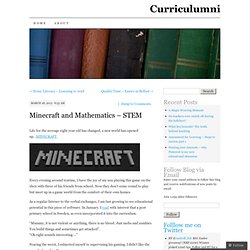 Every evening around teatime, I have the joy of my son playing this game on the xbox with three of his friends from school. Now they don’t come round to play but meet up in a game world from the comfort of their own homes. Maths - Thinking Tools. KS2 Maths. KS1 Maths. Real World Math - Home. Maths Resources Games. Welcome to Math Playground. Online maths practice.