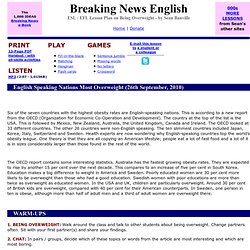 BEING OVERWEIGHT: Walk around the class and talk to other students about being overweight. Change partners often. Sit with your first partner(s) and share your findings. 2. CHAT: In pairs / groups, decide which of these topics or words from the article are most interesting and which are most boring. Have a chat about the topics you liked. 3. How better food at school improves children’s behaviour and attainment. Do children really do better when they eat better at school? 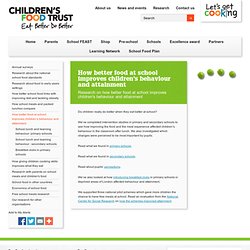 We’ve completed intervention studies in primary and secondary schools to see how improving the food and the meal experience affected children’s behaviour in the classroom after lunch. We also investigated which changes were perceived to be most important by pupils. How better food at school improves children’s behaviour and attainment. How we learned to love school meals. Britain's school dinners are a miserablist national obsession in much the same way that the weather is, or trains, or feckless politicians. 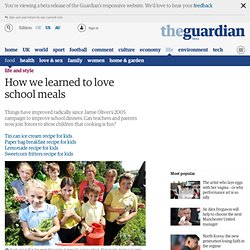 We expect them to be awful, even though the reality can be surprisingly good. OK, maybe not the politicians, but you get my point: look beyond the bad press about turkey twizzlers and nip down to your local school for lunch, because you may be pleasantly surprised. Earlier this week I did just that. Should schools ban packed lunches? We ask school cooks, pupils and their parents. UK packed lunch – show us what's inside your school lunchbox. Mark Wreford's lunch at King Edward VI in Bury St Edmunds - healthier than a school meal? 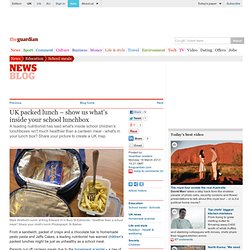 Share your child's lunch Photograph: Si Barber From a sandwich, packet of crisps and a chocolate bar to homemade pesto pasta and Jaffa Cakes, a leading nutritionist has warned children's packed lunches might be just as unhealthy as a school meal. Parents put off canteen meals due to the horsemeat scandal – a rise of 10% - might be surprised to find just 1% of packed lunches meet nutritional standards. Read the full story. What's in your child's packed lunch? How to get involved: To take part, simply take a picture of the packed lunch on Tuesday, Wednesday or Thursday morning this week and upload it to Twitter or Instagram with the hashtag #UKpackedLunch – make sure your location data is turned on by switching on 'add to your photo map'.

Make sure you tell us a bit about the lunch in the headline/caption – tell us what's in the lunchbox as well as where you are from (a postcode or town name will do). Get Your Healthy Lunches! A new study shows that children who electronically pre-order their lunch are more likely to make healthier meal choices than students who pick and choose as they go through the cafeteria line. 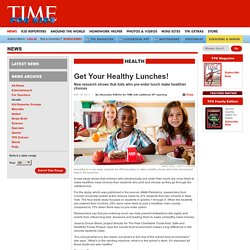 For the study, which was published in the journal JAMA Pediatrics, researchers from Cornell University looked at the choices made by 272 students from two schools in New York. The four-week study focused on students in grades 1 through 5. When the students pre-ordered their lunches, 29% were more likely to pick a healthier main course, compared to 15% when there was no pre-order option. Researchers say that pre-ordering lunch can help prevent distractions like sights and smells from influencing kids’ decisions and leading them to make unhealthy meal choices. Jessica Donze Black, project director for The Pew Charitable Trusts Kids’ Safe and Healthful Foods Project, says the overall food environment makes a big difference in the choices students make.

Ongoing Changes. Obesity Rates Falling. For decades, childhood obesity rates have been on the rise. 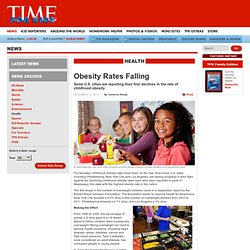 Now some U.S. cities, including Philadelphia, New York City and Los Angeles, are seeing progress in their fight against fat. Declining childhood obesity rates have also been reported in parts of Mississippi, the state with the highest obesity rate in the nation. The first drops in the number of overweight children came in a September report by the Robert Wood Johnson Foundation. The foundation works to improve health for Americans. New York City showed a 5.5% drop in the number of overweight children from 2007 to 2011.

Schools are redesigning lunch programs to include healthier options. Making the Effort From 1980 to 2000, the percentage of obese U.S. kids aged 6 to 19 tripled. In 2011, the Center for Disease Control and Prevention (CDC) began a project to combat childhood obesity. “Obese children are more likely to have asthma, depression, diabetes, and other serious and costly health problems,” said CDC Director Thomas R. MyPlate Kids' Place. FRUIT VEGGIE SWAG. Overweight and Obesity. What is obesity? Body; fat; weight; skin; folds; diabetes; heart; disease; relationships; self-esteem; calories; nutrition; exercise; self; esteem; obesity; Contents Obesity is what doctors call it when you have too much body fat. 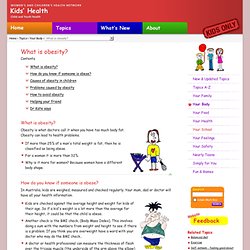 Obesity can lead to health problems. If more than 25% of a man's total weight is fat, then he is classified as being obese. For a woman it is more than 32%. In Australia, kids are weighed, measured and checked regularly. Kids are checked against the average height and weight for kids of their age. It is best if a doctor or other health professional do these tests, as they know how to do them and can explain what they mean. If parents are overweight, children can often be overweight too. Helping You Lead A Healthier Lifestyle. Home.