The Female Narcissist. Here is another post in my ongoing series on narcissism. 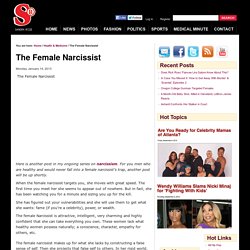 For you men who are healthy and would never fall into a female narcissist’s trap, another post will be up shortly. When the female narcissist targets you, she moves with great speed. The first time you meet her she seems to appear out of nowhere. But in fact, she has been watching you for a minute and sizing you up for the kill. How to Identify Being a Narcissistic Extension: 9 Steps. Edit Article Edited by Amelia in the Forest, Maluniu, Eric, Flickety and 19 others Narcissism is a complex and often misunderstood character disorder. 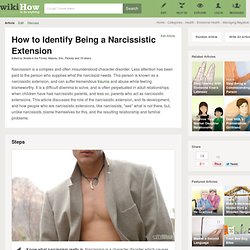 Less attention has been paid to the person who supplies what the narcissist needs. Do Narcissists Know They Are Narcissists? Think of your friendly neighborhood narcissist. Status-seeking, grandiose, loud-mouthed, brash, and flamboyant. Have you ever noticed how he (or she) brags all the time, not only about his astronomical I.Q. and bulging pectoral muscles, but also about the fact that he is narcissistic ? It's as if he is proud of it. Lots of psychologists have theorized that a lack of self-awareness is a hallmark trait of narcissists. My personal experience with narcissists does not seem to support this. Luckily, I don't have to rely on personal anecdotes. The researchers administered a number of different measures of narcissism to college students and looked at how high-scorers are seen by others, how they see themselves, and how they believe they are seen by others.

The Three Phases of A Narcissistic Relationship Cycle: Over-Evaluation, Devaluation, Discard - Esteemology. A relationship with a Narcissist has been compared to being on a roller coaster, with immense highs and immense lows. 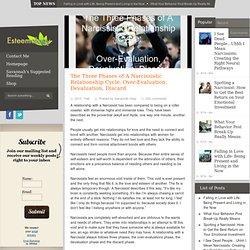 They have been described as the proverbial Jekyll and Hyde, one way one minute, another the next. People usually get into relationships for love and the need to connect and bond with another. Narcissists get into relationships with women for entirely different reasons. They do not feel love and they lack the ability to connect and form normal attachment bonds with others. Narcissists need people more than anyone. Narcissists feel an enormous void inside of them. Narcissists are completely self-absorbed and are oblivious to the wants and needs of others. Narcissism, Psychopathy, and Evil « mind.expressions. DELANY DEAN, JD, PhD delanydean.com KC Mindfulness crimlawdoc@gmail.com Introduction: During both my professional careers (criminal law and psychology), two areas of particular interest to me have been psychopathy and narcissism. 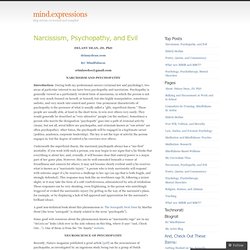 Psychopathy is generally viewed as a particularly virulent form of narcissism, in which the person is not only very much focused on herself, or himself, but also highly manipulative, sometimes sadistic, and very much into control and power. Underneath the superficial charm, the narcissist/psychopath always has a “me-first” mentality. A good non-technical book about this phenomenon is: The Sociopath Next Door by Martha Stout [the term “sociopath” is closely related to the term “psychopath”]. Some good web resources about the phenomenon known as “narcissistic rage” are in my “del.icio.us” links (click over in the side column on this blog, where it says “And, Check Out…”). Psychopathic Narcissism. Friday the 13th turns out to have been unlucky for murder defendant Joran van der Sloot. 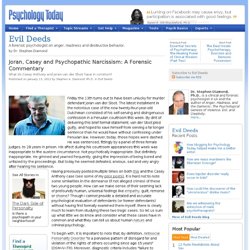 The latest installment in the notorious case of the now twenty-four-year-old Dutchman consisted of his self-serving and disingenuous confession in a Peruvian courtroom this week. By dint of delivering this brief formal statement, van der Sloot pled guilty , and hoped to save himself from serving a far longer sentence than he would have without confessing under Peruvian law. However, today, those hopes were dashed. He was sentenced, fittingly by a panel of three female judges, to 28 years in prison. His affect during his courtroom appearances this week was inappropriate to the austere circumstance. Having previously posted multiple times on both this and the Casey Anthony case (see some of my prior posts) , it is hard not to note some similarities in the demeanor (if not alleged crimes) of these two young people.

Narcissistic Victim Syndrome: What the heck is that? :The Roadshow for Therapists. When a man or woman suffers from a condition named Narcissistic Personality Disorder, they display patterns of deviant or abnormal behaviour that is so bad, that it creates carnage on those people who are unfortunate enough to have a close relationship with them. 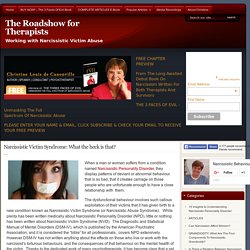 The Diagnostic and Statistical Manual of Mental Disorders (DSM-IV), which is published by the American Psychiatric Association, and it is considered the “bible” for all professionals, covers NPD extensively. First, What do we mean by “Syndrome”? The word “syndrome” comes from the Greek “syn”, which means together, and “dramein”, which means to run.