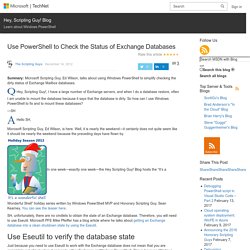 Hey, Scripting Guy! , I have a large number of Exchange servers, and when I do a database restore, often I am unable to mount the database because it says that the database is dirty. So how can I use Windows PowerShell to fix and to mount these databases? Hello SH, Microsoft Scripting Guy, Ed Wilson, is here. In one week—exactly one week—the Hey Scripting Guy! SH, unfortunately, there are no cmdlets to obtain the state of an Exchange database. How to Easily Export Message Tracking Results in Exchange Server 2007 – You Had Me At EHLO… EDIT: We updated this post on 12/9/2008 and corrected the step 4 below. 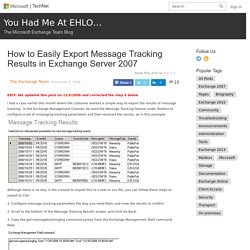 I had a case earlier this month where the customer wanted a simple way to export the results of message tracking. In the Exchange Management Console, he used the Message Tracking feature under Toolbox to configure a set of messaging tracking parameters and then received the results, as in this example: Although there is no way in the console to export this to a text or csv file, you can follow these steps to export to CSV: 1. Configure message tracking parameters the way you need them and view the results to confirm. 2. 3. 4. This will create a CSV file of the message tracking results with column headers that can then be imported into Excel, for example. Exchange 2010 DAG Creation and Configuration, Part 2 - Simple Talk. This is the second and final article of a two-part series explaining the process of creating and configuring a simple two-node Database Availability Group (DAG) in Exchange 2010. 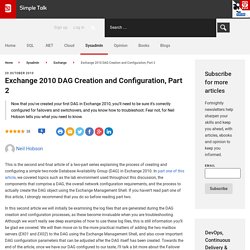 In part one of this article, we covered topics such as the lab environment used throughout this discussion, the components that comprise a DAG, the overall network configuration requirements, and the process to actually create the DAG object using the Exchange Management Shell. If you haven’t read part one of this article, I strongly recommend that you do so before reading part two. In this second article we will initially be examining the log files that are generated during the DAG creation and configuration processes, as these become invaluable when you are troubleshooting. Clint Boessen's Blog: 451 4.4.0 DNS query failed.

Problem: Emails to a particular domain were not going through. 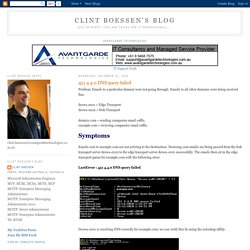 This documentation is archived and is not being maintained. 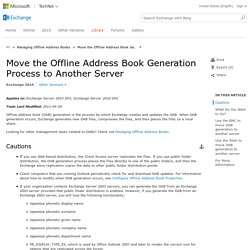 Exchange 2010 Role Based Access Control (Part 1) If you would like to read the other parts in this article series please go to: Introduction In Exchange 2000 and Exchange 2003, permissions were assigned via the Delegation Wizard that was found in the Exchange System Manager console. 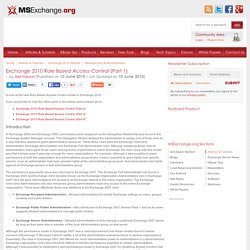 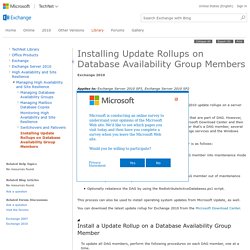 This process can also be used to install operating system updates from Microsoft Update, as well. . Script Generate Health Report for an Exchange Server 2016/2013/2010 Environment. Verified on the following platforms This script is tested on these platforms by the author. 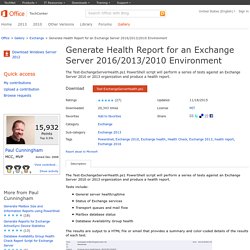 It is likely to work on other platforms as well. If you try it and find that it works on another platform, please add a note to the script discussion to let others know. Disclaimer The sample scripts are not supported under any Microsoft standard support program or service. The sample scripts are provided AS IS without warranty of any kind. Site folder server deleted. [This topic is intended to address a specific issue called out by the Exchange Server Analyzer Tool. 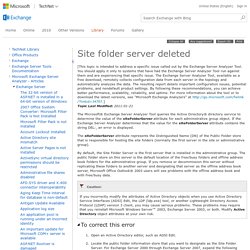 You should apply it only to systems that have had the Exchange Server Analyzer Tool run against them and are experiencing that specific issue. The Exchange Server Analyzer Tool, available as a free download, remotely collects configuration data from each server in the topology and automatically analyzes the data. The resulting report details important configuration issues, potential problems, and nondefault product settings. By following these recommendations, you can achieve better performance, scalability, reliability, and uptime. 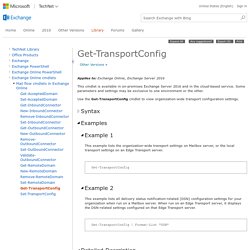 New-ThrottlingPolicy. Applies to: Exchange Server 2016 This cmdlet is available only in on-premises Exchange Server 2016. Use the New-ThrottlingPolicy cmdlet to create a non-default user throttling policy. This example creates a non-default user throttling policy that can be associated with specific users. Any parameters that you omit inherit the values from the default throttling policy GlobalThrottlingPolicy_<GUID>. After you create this policy, you must associate it with specific users. Understanding Message Throttling: Exchange 2010 Help. Applies to: Exchange Server 2013 Topic Last Modified: 2015-03-09 Message throttling involves a variety of limits on message processing rates, SMTP connection rates, and SMTP session time-out values. Database copy is "failed and suspended"; it is not keeping up with the changes on the active database copy. Applies to: Operations Manager Management Pack for Exchange 2010 Topic Last Modified: 2011-08-02 The Microsoft Exchange Server 2010 Management Pack for System Center Operations Manager includes a performance data collection engine that is used to query performance counter objects on computers running Exchange 2010.

For this Operations Manager rule, data is collected by using the performance counter specified in the Details table. To review the value of the performance counter that generated this alert, in Operations Manager, double-click this alert, and then click the General tab. Review the description of the alert that includes the variables specific to your environment. Patching DAG Nodes in Exchange 2010. Face it, most Exchange administrators look forward to their weekly patching projects about as much as you and I look forward to our next trip to the dentist. Throw in the extra complications of switching from a non-clustered environment to one that is clustered and the word root canal comes to mind. When working with non-clustered servers one can usually just use WSUS or other patching products which require simple install patches and then a restart or a reboot of the windows box.

If this is done in an Exchange environment with clusters however, the same process could end in disaster. Technical Exchange bLog: August 2012. Customize the Outlook Web App Sign-In and Sign-Out Pages: Exchange 2010 Help. Installing Updates on Exchange 2010 Database Availability Groups. Managing Distribution Groups in Exchange Server (Part 1) How to Find Exchange Server 2010 Databases with Circular Logging Enabled. An Exchange Server 2010 administrator may want to find out if any of the mailbox databases in the organization have been configured for circular logging. However the Exchange Management Console does not make this information visually available. The Exchange Management Shell can be used to determine which mailbox databases are enabled for circular logging by running the following command. Generate Exchange Environment Reports using Powershell.

Generate Exchange Environment Reports using Powershell sample. Exchange Server and Update Rollup Build Numbers. Irfan-Ali-MS, noup! Clint Boessen's Blog: Flush Transaction Logs in Exchange. Exchange 2010: Forward e-mail to one account to multiple recipients. Email Header Analyzer, RFC822 Parser. Retrieve and Set VM Advanced Configuration (VMX... UPDATE: From PowerCLI 5.1 these functions are no longer required as they have been included in the *-AdvancedSetting cmdlets. The following functions are used to retrieve infromation from a VM or multiple VM's advanced configuration or VMX file and also used to Set a configuration for a single or multiple VMs. Note: The first function was taken from the "VMware vSphere PowerCLI Reference" book which can be found here:

Microsoft Remote Connectivity Analyzer. Managing Certificates in Exchange Server 2010 (Part 1) In the initial article of this article series we will check the planning portion of requesting a new certificate and see some hints that can be useful to your environment during the process. 15 Tips to Optimize an Exchange 2010 Infrastructure (Part 1) PowerShell Tip: Fix All Failed Exchange Database Content Indexes. Uncovering Exchange 2010 Database Availability Groups (DAGs) (Part 4) How to move from a Single Server to High Availability with DAG. Exchange TLS & SSL Best Practices - Exchange Team Blog. How to configure Exchange to redirect OWA HTTP requests to HTTPS requests in IIS 7.