The Power of Values-Based Leadership. Values-based leadership (VBL) ambassador and named one of the 100 Top Thought Leaders in Trustworthy Business 2014 by Trust Across America, Mark Fernandes, Chief Leadership Officer of Luck Companies, has a true passion for inspiring people to believe in themselves and reach their highest potential. 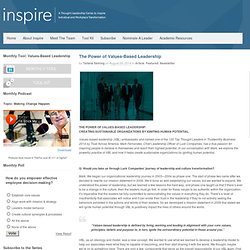 In our conversation with Mark, we explore the powerful practice of VBL and how it helps create sustainable organizations by igniting human potential. Q: Would you take us through Luck Companies’ journey of leadership and culture transformation? Mark: We began our organizational leadership journey in 2003—2004 as phase one. The start of phase two came after we decided to rewrite our mission statement in 2009. Positive Psychology & the Illusion of Free Will. Sherif Arafa is an editorial cartoonist, self-development author, public speaker, and dentist by degree. 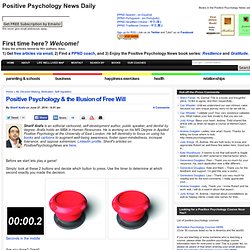 Arafa holds an MBA in Human Resources. He is working on his MS Degree in Applied Positive Psychology at the University of East London. He left dentristry to focus on using his books and cartoons to augment well-being awareness, foster open-mindedness, increase tolerance, and oppose extremism. LinkedIn profile. Sherif's articles on PositivePsychologyNews are here. Before we start lets play a game! Simply: look at these 2 buttons and decide which button to press. Are you done? Allow me now to introduce this scientific fact to you: Your mind may already have made this decision almost 10 seconds before the time you believe you made it. Why Compassion in the Workplace Matters, by Knowledge @ Wharton.

For some employees, a typical day at the office might begin with a barrage of work-related questions from impatient colleagues who have been awaiting their arrival. 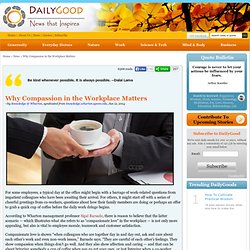 For others, it might start off with a series of cheerful greetings from co-workers, questions about how their family members are doing or perhaps an offer to grab a quick cup of coffee before the daily work deluge begins. According to Wharton management professor Sigal Barsade, there is reason to believe that the latter scenario — which illustrates what she refers to as “companionate love” in the workplace — is not only more appealing, but also is vital to employee morale, teamwork and customer satisfaction.

Companionate love is shown “when colleagues who are together day in and day out, ask and care about each other’s work and even non-work issues,” Barsade says. “They are careful of each other’s feelings. They show compassion when things don’t go well. When Love Is Infectious Beyond Health Care Settings. The Power Of Compassion To Drive Your Bottom Line. 6 Secrets You Can Learn From the Happiest People on Earth. Can enlightenment be traced to specific neural correlates, cognition, or behavior? No, and (a qualified) Yes.

A Neuroscience of Enlightenment? 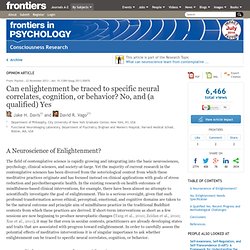 The field of contemplative science is rapidly growing and integrating into the basic neurosciences, psychology, clinical sciences, and society-at-large. Yet the majority of current research in the contemplative sciences has been divorced from the soteriological context from which these meditative practices originate and has focused instead on clinical applications with goals of stress reduction and psychotherapeutic health.

In the existing research on health outcomes of mindfulness-based clinical interventions, for example, there have been almost no attempts to scientifically investigate the goal of enlightenment. This is a serious oversight, given that such profound transformation across ethical, perceptual, emotional, and cognitive domains are taken to be the natural outcome and principle aim of mindfulness practice in the traditional Buddhist contexts from which these practices are derived. No: Enlightenment Needs Specification Conclusions References. Www.dharmaoverground.org - RE: letters written between a meditation master and his student. - Discussion.

Mindfulness - Getting Its Share of Attention. As Soren Gordhamer patiently quieted a packed Wisdom 2.0 event in San Francisco in September for a guided meditation, a few in the communal meeting space known as the Hub couldn’t resist thumbing another message or two before pocketing their sacred devices. A willowy young brunette in a black T-shirt shot video of the crowd with her iPad from her front-row seat. Even after Mr. Gordhamer, who is tall with a sculptural face and Errol Flynn hair, urged the group to “come into presence,” his voice rising in emphasis, someone’s phone was buzzing like a dragonfly. Mr. Gordhamer started Wisdom 2.0 in 2009 to examine how we can live with technology without it swallowing us whole. The “Disconnect to Connect” meet-up was typical. And yet, the problem may offer a solution. Earlier that morning at Google headquarters in Mountain View, Calif., Chade-Meng Tan, a veteran engineer, was laughing about the demand for an in-house course he created called “Search Inside Yourself.”

How To Turn Negative Emotions Into Your Greatest Advantage. In our relentless pursuit of happiness, it's easy to shove aside, make light of, or otherwise evade negative emotions. 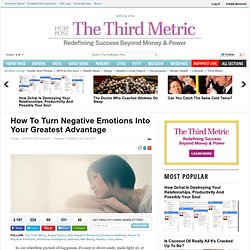 But the truth is that unpleasant feelings are not only inevitable, they can also play a key role in health and well-being. A small study from Olin University published earlier this year showed that being comfortable experiencing and expressing mixed emotions was a predictor of improvements in well-being, while ignoring or evading negative feelings was not associated with boosts in well-being. Not all minds that wander are lost: the importance of a balanced perspective on the mind-wandering state. Cognition Improved By Mindfulness Meditation.