Steve's Dome Home.mov. BUILDING BIG: Dome Challenge Basics. They have been called "the kings of all roofs," and they cover some of our most important buildings. 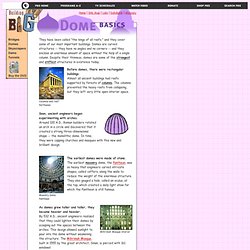 Domes are curved structures -- they have no angles and no corners -- and they enclose an enormous amount of space without the help of a single column. Despite their thinness, domes are some of the strongest and stiffest structures in existence today. Before domes, there were rectangular buildings. Almost all ancient buildings had roofs supported by forests of columns. The columns prevented the heavy roofs from collapsing, but they left very little open interior space. Soon, ancient engineers began experimenting with arches. The earliest domes were made of stone. In the quest for height, engineers came up with a few tricks. The U.S. But a 20th-century invention would change dome engineering forever. A new generation of domes equipped with retractable roofs, like the Toronto SkyDome, has become a popular choice for sports stadiums throughout the world. Concrete Domes. FUTURE / The Architect of Now / Dante Bini addresses our immediate and timely need.

Surrounded by well-manicured shrubs, Victorian porches and wrought- iron patio furniture, Dante Bini's stately house is the last place you would expect to find one of the most innovative architects of the past 40 years. 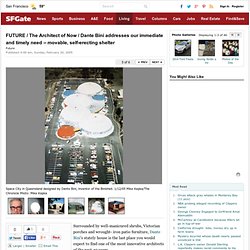 "I love all architecture, all of it," Bini says defiantly. Though he has lived on and off in the United States for more than 25 years, his thick Italian accent still curls words like smoke, each sentence drifting in unexpected directions toward the next. "This house, this is old. But when it was built, it was of its time. " He walks past the pool, his bright orange ascot a focal point against the gray trees and brown hills of St. Being contemporary has never been a problem for Bini. Bini first gained world recognition in 1967 when he used a gigantic balloon and a robot to build a 50-foot tall concrete "Binishell" dome at Columbia University in less than two hours. "There are hundreds, thousands of Binishells, maybe more. But alas, these are things are of the past. 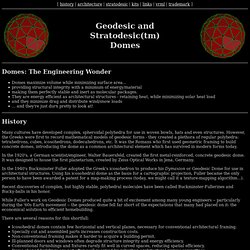 They are energy efficient as architectural structures - retaining heat, while minimizing solar heat load and they minimize drag and distribute wind/snow loads ... and they're just durn pretty to look at! History Many cultures have developed complex, spheroidal polyhedra for use in woven bowls, hats and even structures. In the 1920's, a German scientist/engineer, Walter Bauersfeld, created the first metal-reinforced, concrete geodesic dome. Geodesic Domes Australia. Neo Geo: geodesic construction in contemporary architecture. The MyZeil centre in Frankfurt by Massimilano Fuksas demonstrates the complexity of form that can be achieved with modern materials and techniques Geodesic construction is founded on the principle that the triangle is an inherently stable form, independent of size, and that a triangular framework held together in tension enables the creation of structures that are lightweight but profoundly strong. Applying these building methods to spherical forms encloses the maximum interior volume with the least amount of surface area, meaning significant material and cost savings can be achieved.

These inherent benefits have ensured that geodesic methods remain a relevant and popular choice for architects and developers seeking to 'do more with less'. Cornwall, UK: almost two million people visited the Eden Project's biomes in their first year of opening One of the most successful and popular modern geodesic buildings celebrates its tenth anniversary this month. Geodesic Hub Connectors » Domerama - Iceweasel. S in Spain - Geodesic Dome - Iceweasel. Originally we had planned to do a smooth dome on the round room, a bit like the moorish domes you see throughout this area. 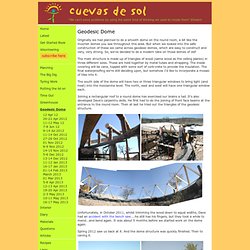 But when we looked into the safe construction of these we came across geodesic domes, which are easy to construct and very, very strong. So, we've decided to do a modern take on those domes of old! The main structure is made up of triangles of wood (same wood as the ceiling planks) in three different sizes. These are held together by metal tubes and strapping. The inside covering will be cane, topped with some sort of cork-crete to provide the insulation. The south side of the dome will have two or three triangular windows to bring light (and heat) into the mezzanine level. Joining a rectangular roof to a round dome has exercised our brains a tad. Unfortunately, in October 2011, whilst trimming the wood down to equal widths, Dave had an accident with the bench saw....he still has his fingers, but they took a while to mend...and bend again.