Social Media in the Classroom

Social Media Goes to School. In Kader Adjout's global history classes at Beaver Country Day School in Chestnut Hill, Massachusetts, students don't just discuss multiple perspectives in the abstract; thanks to Skype, they learn about it firsthand with peers from other countries. 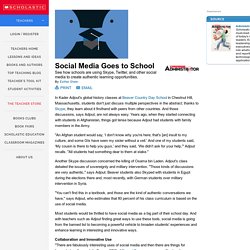 And those discussions, says Adjout, are not always easy. Years ago, when they started connecting with students in Afghanistan, things got tense because Adjout had students with family members in the Army. "An Afghan student would say, ‘I don't know why you're here; that's [an] insult to my culture, and some GIs have seen my sister without a veil.' And one of my students said, ‘My cousin is there to help you guys,' and they said, ‘We didn't ask for your help,'" Adjout recalls.

"All students had something dear to them at stake. " Another Skype discussion concerned the killing of Osama bin Laden. Most students would be thrilled to have social media as a big part of their school day. A Day In The Life Of A Connected Classroom. I had a group of teachers visit my classroom last week. 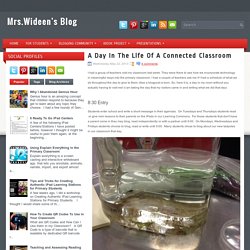 They were there to see how we incorporate technology in meaningful ways into the primary classroom. Lisa's Lingo: Best Day Ever! Brian Crosby and I started a collaborative writing project based on the book The Mysteries of Harris Burdick, by Chris van Allsburg.

Lisa Parisi used Skype and Google Docs to collaborate on a writing assignment with students from a different time zone. The students had been brainstorming ideas for the stories on a Google Doc. Finally, the students were able to Skype with their group members via Skype. Lisa and the principle were amazed at quality of the conversations that the students were having about their stories. The students were excited about the way the stories had change after they had collaborated with their groups. This is a great way to get students excited about writing. This could be an activity that is used for many different grade levels and for various topics. The writing activity could focus on a certain genre or could be a response to a book that was read. – amymitchell136 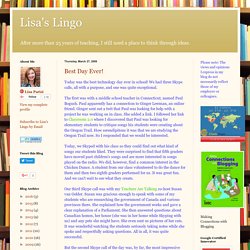 Skyping in Mike Artell- Illustrator & Author. GeoTweets – Inviting your network into the classroom. Last week I had a fantastic afternoon which saw, for the first time I can recall, my learning network impacting in real time on my lesson and the children’s learning. 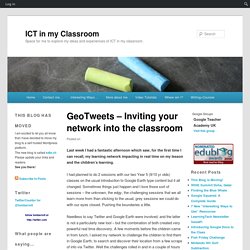 I had planned to do 2 sessions with our two Year 5 (9/10 yr olds) classes on the usual introduction to Google Earth type content but it all changed. Sometimes things just happen and I love those sort of sessions – the unknown, the edgy, the challenging sessions that we all learn more from than sticking to the usual, grey sessions we could do with our eyes closed. Pushing the boundaries a little. Needless to say Twitter and Google Earth were involved, and the latter is not a particularly new tool – but the combination of both created very powerful real time discovery. UNIT PROJECT: FACEBOOK a CHARACTER!!!

Plan, Tweet, Teach, Tweet, Learn, Smile. Buckleys mate That was the first reply from @deangroom to my Twitter request in support of a maths lesson earlier this week. 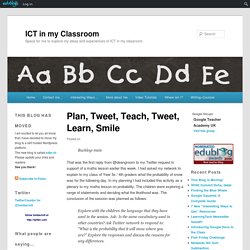 I had asked my network to explain to my class of Year 5s / 4th graders what the probability of snow was for the following day. In my planning I had included this activity as a plenary to my maths lesson on probability. The children were exploring a range of statements and deciding what the likelihood was. The conclusion of the session was planned as follows: The Fearless Classroom: 4th Graders Reaching Out for Change. Mrs. Yollis' Classroom Blog: New Third Grade Bloggers! Terrific third grade bloggers!

Mrs. Yollis is using blogging as a way for her third grade students to share their classroom learning. They are blogging for writing assignments, blogging about their interests, asking questions, and responding to other blogs. Each student has an intro blog explaining the purpose of their blog. Some are for writing, some are for science, and one is even to blog about mother nature. This is a great way to get elementary students to blog in authentic activities. I especially like the narratives that they are posting! – amymitchell136 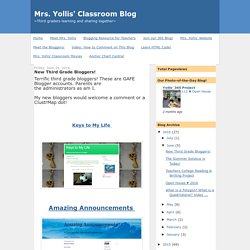 Learning and Sharing with Ms. Lirenman: Using Twitter in a Primary Classroom. It's funny, I've been using twitter a fair bit with my students this past year but as I went to find a post about it to share with a colleague on twitter I discovered I've never actually blogged about it. 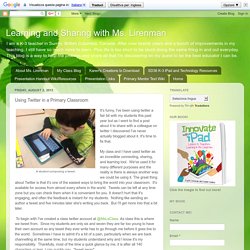 It's time to fix that. My class and I have used twitter as an incredible connecting, sharing, and learning tool. We've used it for many different purposes and the reality is there is always another way we could be using it. The great thing about Twitter is that it's one of the easiest ways to bring the world into your classroom. It's available for access from almost every where in the world.