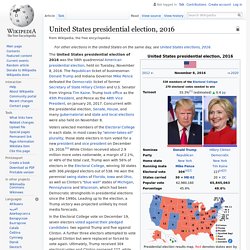 For information about other elections in the United States on the same day, see United States elections, 2016. The series of presidential primary elections and caucuses took place between February and June 2016, staggered among the 50 states, the District of Columbia and U.S. territories. This nominating process was also an indirect election, where voters cast ballots for a slate of delegates to a political party's nominating convention, who in turn elected their party's presidential nominee. Both Clinton and Trump caused major divides within their respective parties, with both nominees having record unfavorability ratings (54.4.% and 58.5% on average, respectively) due to a number of controversies surrounding both candidates.[26] A majority of Americans - 62% - admitted they were less proud of America as a result of the 2016 contest even before election day took place.[27] Background. 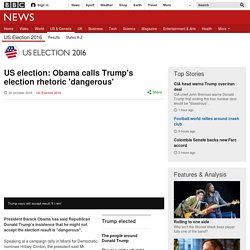 Speaking at a campaign rally in Miami for Democratic nominee Hillary Clinton, the president said Mr Trump's comments undermined American democracy. Mr Trump refused in a televised debate to say he would accept the outcome of the election on 8 November. Élections américaines 2016.