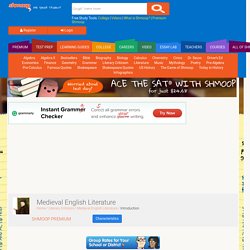 A king wielding a magical sword named ExcaliburA rude red-haired guy telling a highly-embellished fart jokeTruly righteous jousting tournaments with armored knights A woman who sees visions of Jesus and warns people to repent their sins If you guessed "Things I Saw On My Last Trip to Las Vegas," you lose. These kings, jesters, knights, and maidens fair (and ugly) are all lifted straight from medieval literature. And you thought you might be in for a real snooze fest with this one. The phrase "Medieval English literature" refers to works that were produced in England from about the fall of Rome (the late 400s CE) to the invention of the printing press in the 15th century. For those of you who are keeping score—and we hope you are—that's about one thousand years of literature. There is some method to the madness of these literary epochs, though. Consider, for a moment, how a lot of early medieval literature circulated orally.

English Medieval literature was not written. It is was passed by word of mouth from one generation to another by English, Welsh and Irish bards. The 100 Most Important People of the Middle Ages #41-50. Famous Medieval People - Medieval Life and Times. Famous People - Medieval Biographies, Timelines and History of the Famous PeopleFamous people of the Medieval period and details of the key dates and events in their lives. 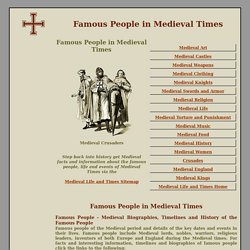 Famous people include Medieval lords, nobles, warriors, religious leaders, inventors of both Europe and England during the Medieval times. English people. The English are a nation and ethnic group native to England, who speak the English language. 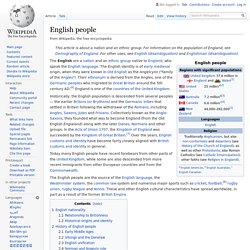 The English identity is of early mediaeval origin, when they were known in Old English as the Angelcynn ("family of the Angles"). England is one of the countries of the United Kingdom and English people in England are British citizens. Their ethnonym is derived from the Angles, one of the Germanic peoples who migrated to Great Britain in the 5th century AD.[7] Today some English people have recent forebears from other parts of the United Kingdom while some are also descended from more recent immigrants from other European countries and from the Commonwealth. The English people are the source of the English language, the Westminster system, the common law system and numerous major sports such as football, rugby and tennis.[9] These and other English cultural characteristics have spread worldwide, in part as a result of the former British Empire.

English nationality[edit] In 1965, the historian A. History - Ancient History in depth: Peoples of Britain. Medieval History, Castles. MedievalPlus.com The Middle Ages is a period in European history which, along with its adjective ‘Medieval’, was first referred to by italian scholars and academics of the late fifteenth century.

They were basically stating that the society in which they now lived was significantly more civilized and advanced in many ways, than that which had existed during the previous thousand years. This may have been true within certain elite sections of Italian society which had begun to emulate the art and philosophy of ancient Greece, but generally in Italy and Europe overall no all-pervading change had occurred. Historians since that time have, however, used the terms 'middle ages' and medieval as a convenient way to refer to that general period in European history. Middle Ages. Crazy Medieval Medical Practices We Still Use. Medieval times were dark and without reason, or at least that’s what we’re taught to think. 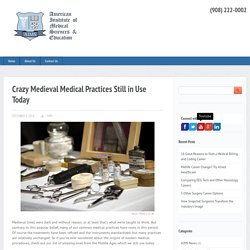 But contrary to this popular belief, many of our common medical practices have roots in this period. Of course the treatments have been refined and the instruments standardized, but many practices are relatively unchanged. So if you’ve ever wondered about the origins of modern medical procedures, check out our list of amazing ones from the Middle Ages which we still use today: #1 Bloodletting A.K.A Phlebotomy We’re all shocked and disgusted when we hear about medieval bloodletting, but this seemingly crazy practice is still used today.

. #2 Drilling Into Your Head? Ever have a headache so bad you’d be willing to have someone drill a hole in your head to make it stop? #3 Saving Sight, or Torture? Cataracts certainly aren’t a 21st century ailment, and neither is the treatment for them. . #4 I Wouldn’t Want to Be Awake… What’s dwale you ask? Clyster also, known as the enema, was once considered a cure-all. 13 Strange Superstitions: Bizarre Beliefs from Around the World.