According to World Health Organization, mental disorder affects one in every four people. Around 450 million people currently suffer from such conditions, placing mental disorders among the leading causes of ill-health and disability worldwide.

As we progress in building a better world for the future, we should also try to reduce and ultimately remove social stigmas that the society have on psychological disorders.

Various help-lines and health care organisations exist and do provide help to those in need.

"We can make the world a better place, one day at a time". Depression. Childhood depression. Mental illnesses are common in children and youth. 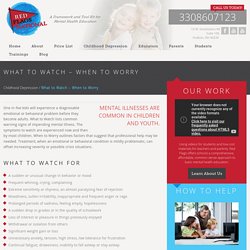 One in five kids will experience a diagnosable emotional or behavioral problem before they become adults. What to Watch lists common warning signs of impending mental illness. The symptoms to watch are experienced now and then by most children. When to Worry outlines factors that suggest that professional help may be needed. Treatment, when an emotional or behavioral condition is mildly problematic, can offset increasing severity or possible crisis situations. What to Watch For When to worry All parents might see any of these symptoms in their children on occasion. Symptoms & Treatment of depression. What is Depression? Clinical depression goes by many names, such as “the blues,” biological depression, and major depression. But all of these names refer to the same thing: feeling sad and depressed for weeks or months on end — not just a passing blue mood of a day or two.

This feeling is most often accompanied by a sense of hopelessness, a lack of energy (or feeling “weighed down”), and taking little or no pleasure in things that once gave a person joy in the past. Depression symptoms take many forms, and no two people’s experiences are exactly alike. A person who’s suffering from this disorder may not seem sad to others. 9 Things People With Depression Wish You Knew About Living With the Condition. The Science of Depression. The Stigma Of Depression. Bipolar Disorder. 13 Effects of Bipolar Disorder on the Body. Bipolar Disorder symptoms and warning signs. Benazzi, F. 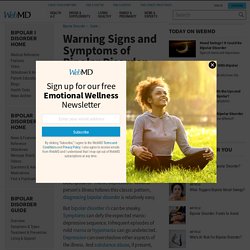 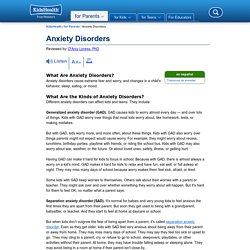 Anxiety disorders cause extreme fear and worry, and changes in a child's behavior, sleep, eating, or mood. Panic Attacks & Panic Disorder. Signs and Symptoms of Generalized Anxiety Disorder. Generalized anxiety disorder (or GAD) is characterized by excessive, exaggerated anxiety and worry about everyday life events with no obvious reasons for worry. 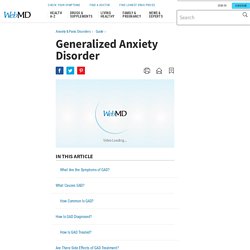 Living with anxiety. Living With Social Anxiety. Obsessive-Compulsive Disorder. Signs and Symptoms of OCD. "OCD" is one of those terms that some people misuse as a way to describe people who like things super-clean or arranged just so. 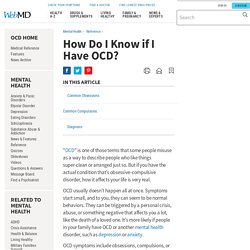 But if you have the actual condition that’s obsessive-compulsive disorder, how it affects your life is very real. OCD usually doesn’t happen all at once. Symptoms start small, and to you, they can seem to be normal behaviors. Obsessive Compulsive Disorder Linked To Brain Activity. Cambridge researchers have discovered that measuring activity in a region of the brain could help to identify people at risk of developing obsessive compulsive disorder (OCD). 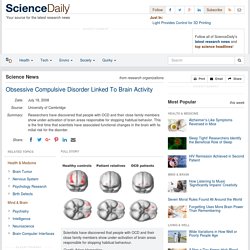 As the current diagnosis of OCD is based on a clinical interview and often does not occur until the disorder has progressed, this could enable earlier more objective detection, and intervention. The scientists have discovered that people with OCD and their close family members show under-activation of brain areas responsible for stopping habitual behaviour. This is the first time that scientists have associated functional changes in the brain with familial risk for the disorder. Obsessive compulsive disorder is a debilitating condition that affects 2-3% of the population at some point in life. Patients suffer from recurrent intrusive thoughts (obsessions) that are distressing and hard to suppress. Although OCD tends to run in families, genetic factors responsible for this heritability are not known. OCD and Intimate Relationships. Living with Obsessive Compulsive Disorder. 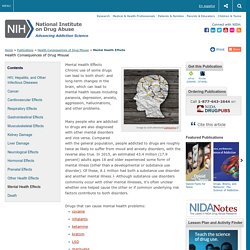 Chronic use of some drugs can lead to both short- and long-term changes in the brain, which can lead to mental health issues including paranoia, depression, anxiety, aggression, hallucinations, and other problems. Alcohol & Substance Abuse Symptoms. 5 Most Common Causes of Alcoholism. You may understand what alcoholism is, but how does it start? 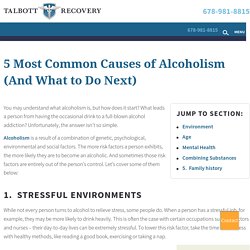 What leads a person from having the occasional drink to a full-blown alcohol addiction? Unfortunately, the answer isn’t so simple. Alcoholism is a result of a combination of genetic, psychological, environmental and social factors. The more risk factors a person exhibits, the more likely they are to become an alcoholic. And sometimes those risk factors are entirely out of the person’s control. 1. While not every person turns to alcohol to relieve stress, some people do. 2. According to the Mayo Clinic, those who begin drinking at an early age are more likely to have an alcohol problem or a physical dependence on alcohol as they get older. 3. Anxiety, depression, bipolar disorder or other mental health issues can increase risk of alcoholism. 4. Drug use problems and mental health.