TiddlyWiki. A standard edit dialog on a tiddler TiddlyWiki is an open-source single page application wiki in the form of a single HTML file that includes CSS, JavaScript, and the content. 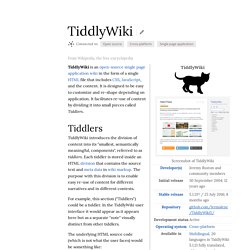 It is designed to be easy to customize and re-shape depending on application. It facilitates re-use of content by dividing it into small pieces called Tiddlers. Tiddlers TiddlyWiki introduces the division of content into its "smallest, semantically meaningful, components", referred to as tiddlers. TiddlyMap Alternatives and Similar Software.

JSON-LD and MongoDB. GitHub - swagger-api/swagger-ui at v2.1.5. Infolis-web/schemo.coffee at 37258a502458bae166ed7c9fb3273980ba2bb454 · infolis/infolis-web. Running MongoDB on docker with compose and data volumes. Dockerizing MongoDB As best practices it is not good to run databases in a single container since it limits the flexibility due to the container not being ephemeral anymore. 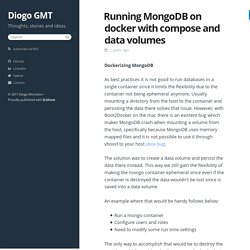 Usually mounting a directory from the host to the container and persisting the data there solves that issue. However, with Boot2Docker on the mac there is an existent bug which makes MongoDB crash when mounting a volume from the host, specifically because MongoDB uses memory mapped files and it is not possible to use it through vboxsf to your host vbox bug. Create a MongoDB Docker Container (Example) This tip will assist you setting up a mongodb container using docker. 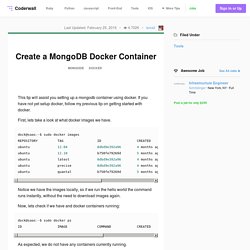 Docker-mongodb/Dockerfile at master · frodenas/docker-mongodb. How To Set Up a Node.js Application for Production on Ubuntu 16.04. Introduction Node.js is an open source JavaScript runtime environment for easily building server-side and networking applications. 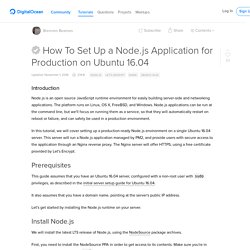 The platform runs on Linux, OS X, FreeBSD, and Windows. Node.js applications can be run at the command line, but we'll focus on running them as a service, so that they will automatically restart on reboot or failure, and can safely be used in a production environment. In this tutorial, we will cover setting up a production-ready Node.js environment on a single Ubuntu 16.04 server. Mongoose Quick Start v4.9.5. First be sure you have MongoDB and Node.js installed. 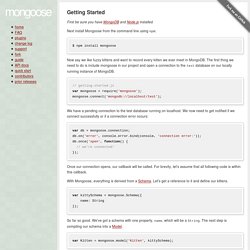 Next install Mongoose from the command line using npm: $ npm install mongoose Now say we like fuzzy kittens and want to record every kitten we ever meet in MongoDB. The first thing we need to do is include mongoose in our project and open a connection to the test database on our locally running instance of MongoDB. var mongoose = require('mongoose'); mongoose.connect(' Docker.github.io/Dockerfile at master · docker/docker.github.io. Dockerize MongoDB. Estimated reading time: 6 minutes Introduction In this example, we are going to learn how to build a Docker image with MongoDB pre-installed. 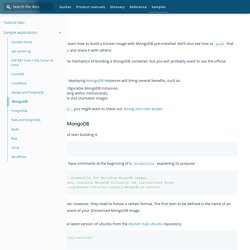 We’ll also see how to push that image to the Docker Hub registry and share it with others! Note: This guide will show the mechanics of building a MongoDB container, but you will probably want to use the official image on Docker Hub. How to Install MongoDB on Ubuntu 16.04. Introduction MongoDB is a free and open-source NoSQL document database used commonly in modern web applications. 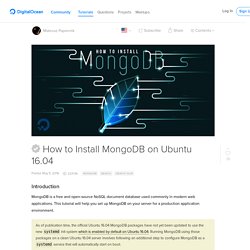 This tutorial will help you set up MongoDB on your server for a production application environment. As of publication time, the official Ubuntu 16.04 MongoDB packages have not yet been updated to use the new systemd init system which is enabled by default on Ubuntu 16.04. Running MongoDB using those packages on a clean Ubuntu 16.04 server involves following an additional step to configure MongoDB as a systemd service that will automatically start on boot. Prerequisites. Tanepiper/SublimeText-Nodejs. Git clone particular version of remote repository.