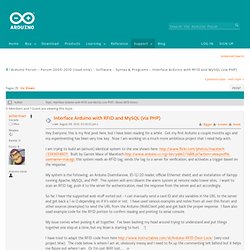 My father always says: “Die Sprache des Ingenieurs ist die Zeichnung” what means as much as ” the language of an engineer is drawings” so i made a little “graphic”: DS18B20—–>Patchpanel—–>(Arduino—>Ethernetshield)—->Network—–>(Server(Apache—->PHP—>MySQL) Edit: I found out that my first code is only working for one sensor, due to some Arduino->PHP inconsistencies (Arduino called the script for every temperature, but script wants to write all data in one call) So I rewrote the code to send all temperatures in one call. So here´s what i used: ethernet cable 12-port Patchpanel. Data logging with open source hardware and software in the energy sector.

Overview As power generation moves towards cleaner and smarter sources, small-scale photovoltaic panel arrays are springing up on roofs and in backyards. 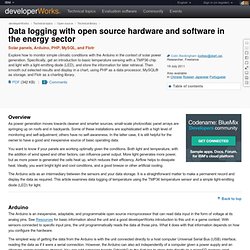 Some of these installations are sophisticated with a high level of monitoring and self-adjustment; others have no self-awareness. In the latter case, it is still helpful for the owner to have a good and inexpensive source of basic operating data. You want to know if your panels are working optimally given the conditions. Both light and temperature, with the addition of wind speed and other factors, can influence panel output. The Arduino acts as an intermediary between the sensors and your data storage. Untitled. Untitled. Arduino sending requests to PHP script « Andy's Life. I’ve been asked by a number of people to provide an example of using the EtherShield library to pass data to a PHP script, to for example store sensor data in a database. 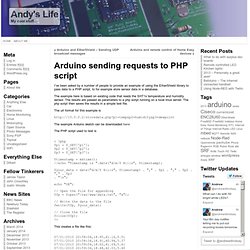 The example here is based on existing code that reads the SHT1x temperature and humidity sensor. The results are passed as parameters to a php script running on a local linux server. The php script then saves the results in a simple text file. The url format for this example is The example Arduino sketch can be downloaded here The PHP script used to test is < ? $timestamp = mktime(); //echo "Timestamp is ".date("d/m/Y H:i:s", $timestamp); $your_data = date("d/m/Y H:i:s", $timestamp) . "," . Echo "OK"; // Open the file for appending $fp = fopen("/var/www/data.txt", "a"); // Write the data to the file fwrite($fp, $your_data); // Close the file fclose($fp); ? This creates a file like this: Bookmark this post: