‘Satan at Play’ and other vintage movie magic from early 1900s. While not exactly dangerous this early film Satán se divierte by Segundo de Chomón is certainly amusing and a work of art. 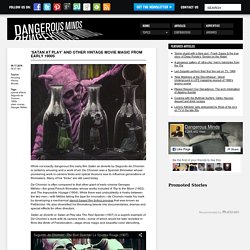 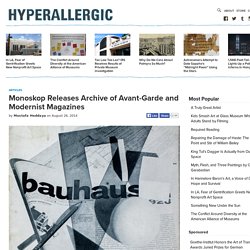 GIFs Showing How Things Are Made. Discovery Channel's How It's Made is arguably one of the most fascinating shows on television. 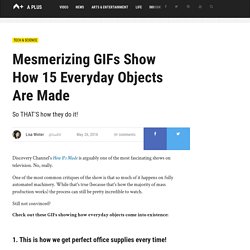 No, really. One of the most common critiques of the show is that so much of it happens on fully automated machinery. While that's true (because that's how the majority of mass production works) the process can still be pretty incredible to watch. Still not convinced? Check out these GIFs showing how everyday objects come into existence: Taiwanese Typhoon Blues – iGNANT.de. Born in Warsaw, Poland, to photographer parents, Tom Kondrat grew up surrounded by cameras, and had his first photo published at age 12. 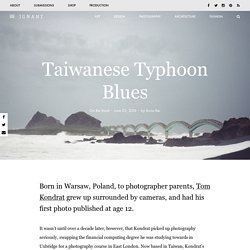 “These stories made typhoons sound very dangerous but at the same time there was something mysterious and exciting about them.”It wasn’t until over a decade later, however, that Kondrat picked up photography seriously, swapping the financial computing degree he was studying towards in Uxbridge for a photography course in East London. 9x12 Original Canvas Paintings. C. Diab — Cascadian Musician. Drawing Lines - Various Exhibition. The selection of works will show different approaches made by the artists to creating image, meaning or emotion through the application of line to surface. 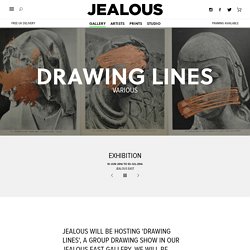 The exhibition aims to demonstrate the open nature and complexity of the often overlooked and undervalued medium, which is so often regarded as a form of draft rather than fully realised work. Drawing as a medium offers an undiluted and immediate form of expression. The marks made by the artist cannot be hidden or clothed behind further working, evoking a personal and intimate portrait of the artist. ‘Drawing is the honesty of the art. H e l e n : : s c a r s d a l e. Herbert pföstl. Yeşim aksu. Seda mit. LEMUR STORE. Why Are There Violent Rabbits In The Margins Of Medieval Manuscripts? Images like these have been very popular on the internet recently, with this listicle from The Poke giving some great examples of the genre, as well as the great Sexy Codicology website, and a lot of fantastic accounts on Twitter. 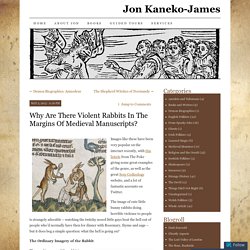 The image of cute little bunny rabbits doing horrible violence to people is strangely adorable – watching the twitchy nosed little guys beat the hell out of people who’d normally have then for dinner with Rosemary, thyme and sage – but it does beg a simple question: what the hell is going on? The Ordinary Imagery of the Rabbit The usual imagery of the rabbit in Medieval art is that of purity and helplessness – that’s why some Medieval portrayals of Christ have marginal art portraying a veritable petting zoo of innocent, nonviolent, little white and brown bunnies going about their business in a field.

The other association of the rabbit is more commonly known – that of fertility. That still doesn’t answer the question of the violent bunny rabbit, though. Drolleries. Richard Greenan. 7 Nominees for the Best Tree in Literature. WWII and the Buddy System. In the relatively innocent and emotionally charged days of the 1940s — long before the Kinsey Report detailed how many men were having same-sex sexual experiences — soldiers and sailors were encouraged to form close bonds with their fellow troops. 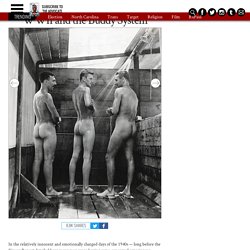 They needed to trust and count on each other — their lives depended on it. Photographer Michael Stokes captured this all-male environment, and his work is compiled in My Buddy: World War II Laid Bare. Most of these young men were just entering manhood. Many came from landlocked states and small towns and farms. Archatlas. ZoomInfo Posters created by PatentPrints of the original patent drawings for Lego pieces. 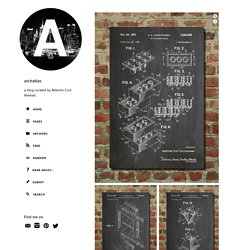 Following World War II, plastics became available in Denmark, and Lego purchased a plastic injection molding machine in 1947.One of the first modular toys to be produced was a truck that could be taken apart and re-assembled. In 1947, Ole Kirk and Godtfred obtained samples of interlocking plastic bricks produced by the company Kiddicraft. These “Kiddicraft Self-Locking Building Bricks" were designed by Hilary Page. Tinkers Bubble an Off-Grid community in Somerset, England. The name Tinkers Bubble comes from the spring that flows through the woodland ending in a small waterfall by the road. 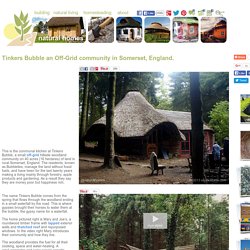 This is where gypsies brought their horses to water them at the bubble; the gypsy name for a waterfall. The home pictured right is Mary and Joe’s, a roundwood timber frame with lapped exterior walls and thatched roof and repurposed windows. In the video right Mary introduces their community and how they live. The woodland provides the fuel for all their cooking, space and water-heating. A wind-generator and solar panels provide enough electricity for lighting, music and laptop computers. Living in an English woodland can be a damp experience. Swampy. Ormanın koynunda filizlenen topluluk: Tinker's Bubble. L+u+k+e+S+t+e+t+t+n+e+r.

May 2016 MORE THAN FIFTY YEARS since Jean-Marie Straub and Danièle Huillet made their first work together, and a decade after Huillet’s death, the husband-and-wife filmmaking duo known, in short, as Straub-Huillet are having something of a belated moment: Miguel Abreu Gallery’s Sequence Press is publishing a volume of their collected writings, translated and edited by Sally Shafto; the Austrian Film Museum in Vienna has just published a monograph on their work, edited by Ted Fendt; and the Museum of Modern Art in New York is mounting the first complete retrospective of their films (May 6–June 6), organized by Joshua Siegel.

New images are flooding the world, and the sciences contribute more than their fair share. But open a textbook, turn on the TV, or visit a webpage and look at the pictures. There among the recent entrants from laboratories, clinics, and field sites, a few golden oldies jostle for attention. While most images fade away fast, a minority represent knowledge for long periods — even in science, where we might have expected constant updating.

Düğün gibi bir haftaydı, takılar bizde kaldı. @sezyum. Studio Sarp Sozdinler / 383c Type Foundry. F ¦ O ¦ L. Spring Break Tapes ~ Mystery Batch. The latest batch from Spring Break Tapes is a novel idea, and a great one at that: they’re a complete and utter mystery. The initial submission we received only went so far as to say that the tapes were by new artists who hadn’t released any music before. Other than that, no public information about them exists. So often, and usually to the detriment of the music, people choose to focus their attention on the individual artist rather than the music herself. 1 Tape, 100 Digital Albums, 10 Dollars! Why a Trans Woman Burned a Rainbow Pride Flag. TERI VARHOL'S NON-LINEAR PHOTO DIARY. GoatMan: How I Took a Holiday from Being Human.