Kv4oW6muZn8bm402ONcghRCFp. Who are the Kurds? Image copyright AFP Between 25 and 35 million Kurds inhabit a mountainous region straddling the borders of Turkey, Iraq, Syria, Iran and Armenia. 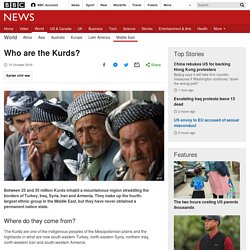 They make up the fourth-largest ethnic group in the Middle East, but they have never obtained a permanent nation state. Where do they come from? The Kurds are one of the indigenous peoples of the Mesopotamian plains and the highlands in what are now south-eastern Turkey, north-eastern Syria, northern Iraq, north-western Iran and south-western Armenia. Today, they form a distinctive community, united through race, culture and language, even though they have no standard dialect. Kurdistan: A State of Uncertainty Why don't they have a state? Image copyright Reuters. Cycle of deprivation. GeographyReview29_4_poster_Place.pdf?ext= McDonaldization. McDonaldization is a McWord developed by sociologist George Ritzer in his 1993 book The McDonaldization of Society. 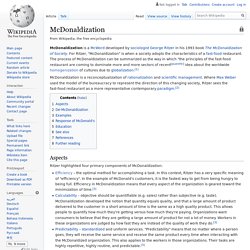 For Ritzer, "McDonaldization" is when a society adopts the characteristics of a fast-food restaurant. The process of McDonaldization can be summarized as the way in which "the principles of the fast-food restaurant are coming to dominate more and more sectors of recent[quantify] idea about the worldwide homogenization of cultures due to globalization.[1] Aspects Ritzer highlighted four primary components of McDonaldization: Efficiency – the optimal method for accomplishing a task. With these four principles of the fast food industry, a strategy which is rational within a narrow scope can lead to outcomes that are harmful or irrational. De-McDonaldization Organizations have been making an effort to deny the rationalization of McDonaldization. 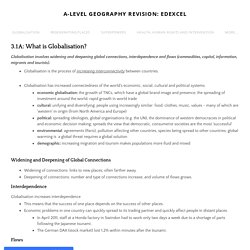 Globalisation involves widening and deepening global connections, interdependence and flows (commodities, capital, information, migrants and tourists). Globalisation is the process of increasing interconnectivity between countries. ​ Widening and Deepening of Global Connections Widening of connections: links to new places, often farther away. Space vs. place - Geography. From Geography In the humanistic geography space and place are important concepts. 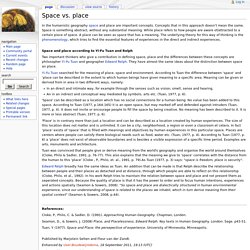 Concepts that in this approach doesn’t mean the same. Space is something abstract, without any substantial meaning. While place refers to how people are aware of/attracted to a certain piece of space. A place can be seen as space that has a meaning. Space and place according to Yi-Fu Tuan and Relph Two important thinkers who give a contribution in defining space, place and the differences between these concepts are philosopher Yi-Fu Tuan and geographer Edward Relph.

Yi-Fu Tuan searched for the meaning of place, space and environment. In an direct and intimate way, for example through the senses such as vision, smell, sense and hearing. 'Space' can be described as a location which has no social connections for a human being. 'Place' is in contrary more than just a location and can be described as a location created by human experiences. Edward Relph broadly has the same ideas as Tuan. References: 308342-changing-places-making-spaces-delivery-guide. Toxteth and Lympstone Case Study Flashcards. Ga alevel cp place workshop handout pdf. Fichas de aprendizaje Changing Spaces, Making Places (case study): Lympstone ... Lympstone. Lympstone is a village and civil parish in East Devon in the English county of Devon. 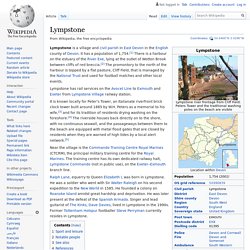 It has a population of 1,754.[1] There is a harbour on the estuary of the River Exe, lying at the outlet of Wotton Brook between cliffs of red breccia.[2] The promontory to the north of the harbour is topped by a flat pasture, Cliff Field, that is managed by the National Trust and used for football matches and other local events. Lympstone has rail services on the Avocet Line to Exmouth and Exeter from Lympstone Village railway station. It is known locally for Peter's Tower, an Italianate riverfront brick clock tower built around 1885 by W.H. Peters as a memorial to his wife,[3] and for its tradition of residents drying washing on the foreshore.[4] The riverside houses back directly on to the shore, with no continuous seawall, and the passageways between them to the beach are equipped with metal flood gates that are closed by residents when they are warned of high tides by a local alert network.[5]

Toxteth. Toxteth is an inner-city area of Liverpool. 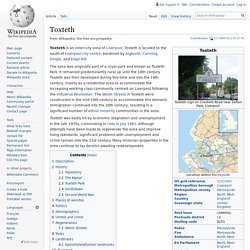 Toxteth is located to the south of Liverpool city centre, bordered by Aigburth, Canning, Dingle, and Edge Hill. The area was originally part of a royal park and known as Toxteth Park. It remained predominantly rural up until the 18th century. Toxteth was then developed during this time and into the 19th century, mainly as a residential area to accommodate the increasing working class community centred on Liverpool following the Industrial Revolution. The Welsh Streets in Toxteth were constructed in the mid-19th century to accommodate this demand.

Toxteth was badly hit by economic stagnation and unemployment in the late 1970s, culminating in riots in July 1981. Description[edit]