15 Helpful Chrome Extensions For Developers. A couple of months ago, we reviewed the new Firefox browser designed for developers. 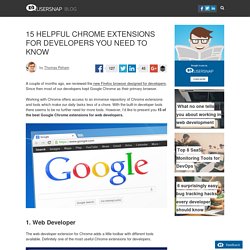 Since then most of our developers kept Google Chrome as their primary browser. Working with Chrome offers access to an immense repository of Chrome extensions and tools which make our daily tasks less of a chore. With the built-in developer tools there seems to be no further need for more tools. However, I’d like to present you 15 of the best Google Chrome extensions for web developers. 1. The web developer extension for Chrome adds a little toolbar with different tools available.

Link: Web developer extension. 2. The Responsive Web Design Tester is a great Chrome extension for getting a quick look how your website behaves in different browsers and devices. Link: Responsive Web Design Tester 3. The Window Resizer extension lets you resize your browser window on the fly. Link: Window Resizer 4. ColorPick Eyedropper is a simple color picker tool that allows you to select color values from any web page. 5. 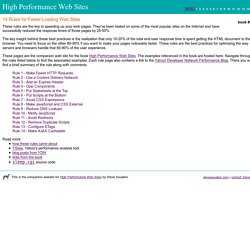 They've been tested on some of the most popular sites on the Internet and have successfully reduced the response times of those pages by 25-50%. The key insight behind these best practices is the realization that only 10-20% of the total end-user response time is spent getting the HTML document to the browser. You need to focus on the other 80-90% if you want to make your pages noticeably faster. These rules are the best practices for optimizing the way servers and browsers handle that 80-90% of the user experience. Six TED Talks that can change your career. 12 Little-Known CSS Facts (The Sequel) Over a year ago I published the original 12 Little-known CSS Facts and, to this day, it has been one of SitePoint’s most popular articles ever. 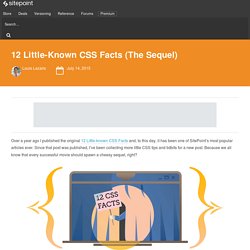 Since that post was published, I’ve been collecting more little CSS tips and tidbits for a new post. Because we all know that every successful movie should spawn a cheesy sequel, right? So let’s get right into this year’s developer’s dozen. I’m sure many of us will know at least some of these, but you can let me know in the comments how many of these were new to you. 1. This is something I’ve written about before more than four years ago on SitePoint, but I still think many beginners and even some experienced developers don’t know this feature exists. Believe it or not, the following is valid border-radius code: If you’ve never seen that, it might seem a little confusing, so here’s the explanation from the spec: The spec also provides the following diagram: Most border-radius generators do not allow you to set these optional values. 2. 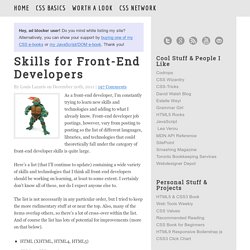 Front-end developer job postings, however, vary from posting to posting so the list of different languages, libraries, and technologies that could theoretically fall under the category of front-end developer skills is quite large. Here’s a list (that I’ll continue to update) containing a wide variety of skills and technologies that I think all front-end developers should be working on learning, at least to some extent. I certainly don’t know all of these, nor do I expect anyone else to. The list is not necessarily in any particular order, but I tried to keep the more rudimentary stuff at or near the top. Also, many of the items overlap others, so there’s a lot of cross-over within the list. Please Contribute The list is a rough first draft, and I’d be happy to update it and refine it based on any feedback. Advertise Here Leave a Reply.