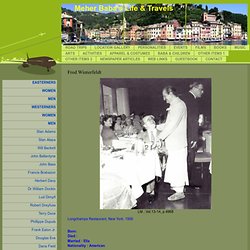 A Short Memoir Fred and Ella by Robert Dreyfuss. Stories. Volume 16 Number 2 Page 29. Meher Baba … On Suffering September 19, 1938 — Meherabad* In response to the question by one of the group — "Why do we suffer? 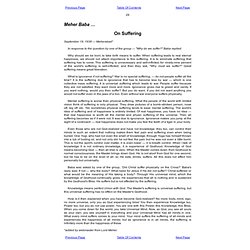 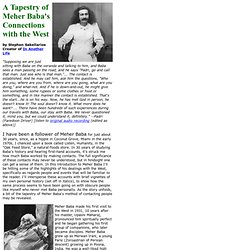 Just see who is that man. "... Untitled Document. Ella's shoulder, Fred knew that Baba was God without a doubt. 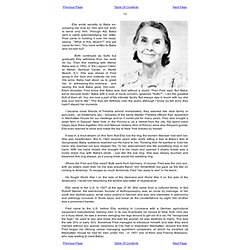 Then Fred said, But Baba, we've become Sufis. " Baba with a look of mock concern, gestured "Sufis? " - I am the greatest Sufi of them all. You are now a part of My intimate family. But always stay in touch with Ivy, she was your link to Me. " I became close friends of Fredella almost immediately: they seemed like dear family or guru-bais - as Easterners say - disciples of the same Master. It was in a trout stream on this farm that Ella lost the ring the women Mandali had sent her. Where did Fred and Ella meet? Meher Baba Film Archive International. The Spiritual Hierarchy 2. Baba on Channeling. Here is what Meher Baba had to say about what he called "so-called messages" people from time to time say they receive from him. 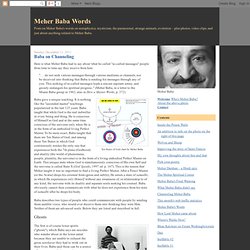 Baba gave a unique teaching. Mast (Sufism) Masts in Kashmir In Sufi philosophy, a mast (pronounced "must")[1] is a person who is overcome with love for God, with concomitant external disorientation resembling intoxication. 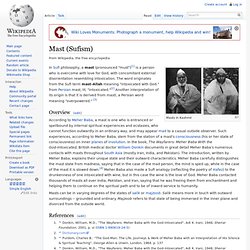 The word originates from the Sufi term mast-Allah meaning "intoxicated with God. " from Persian mast, lit. "intoxicated. "[2] Another interpretation of its origin is that it is derived from masti, a Persian word meaning "overpowered. " [3] Jump up ^ Donkin, William, M.D., "The Wayfarers: Meher Baba with the God-Intoxicated", Adi K. Angels 1. Majzoob and Salik. I was speaking with someone quite familiar with Meher Baba's teaching and I was surprised they did not know what a "Majzoob" was. 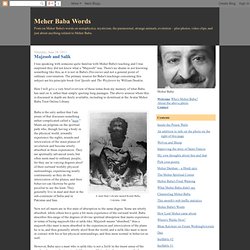 There's no shame in not knowing something like this, as it is not in Baba's Discourses and not a general point of ordinary conversation. The primary sources for Baba's teachings concerning this subject are his principle book God Speaks and The Wayfarers by William Donkin. Here I will give a very brief overview of these terms from my memory of what Baba has said on it, rather than simply quoting long passages. The above sources where this is discussed in depth are freely available, including to download at the Avatar Meher Baba Trust Online Library. Now not all masts are in this state of absorption to the same degree. Meher Baba, date of birth: 1894/02/25, Horoscope, Astrological Portrait, Dominant Planets, Birth Data, Biography.

Horoscope and chart of Meher Baba (Placidus system) Hover your mouse on an object and click to display information. 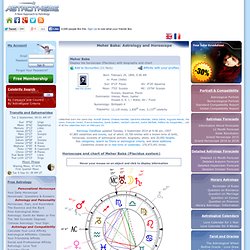 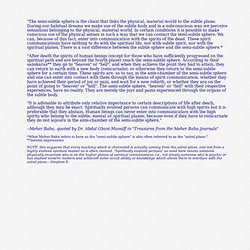 During our habitual dreams we make use of the subtle body and in a subconscious way we perceive sensations belonging to the physical, material world. In certain conditions it is possible to make conscious use of the physical senses in such a way that we can contact the semi-subtle sphere. We can, because of this fact, enter into communication with the spirits of the dead. These spirit communications have nothing to do with the spiritual life, nor with subtle spirit, nor with the spiritual planes. Archangels. Pralaya: Dissolution of the World. MEHER BABA ON CREATION. This whole universe, with all its vastness, grandeur and beauty, is nothing but sheer imagination. 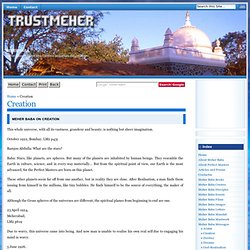 October 1922, Bombay, LM2 p431. Written Materials. "You have no idea what just one scrap of My sadra will mean to the world in the future. "-Meher Baba Written Materials The written word played an important part in Meher Baba's advent and daily life. When Baba wanted to hear the newspaper read out, he would gesture, "Let's have the bogus news. " When He wanted to hear letters from His lovers, He would sometimes gesture, "Let's have the real news! " In response to "the real news", which flowed in daily, Baba's letters and messages to his followers, although personal and often quite specific to the individuals, nevertheless reflected not only his Love for His lovers, but also his keen interest in their lives. Many of his close ones also kept diaries of the daily events, some of which have been published in book form.

Discourses (Meher Baba) Discourses (ISBN 1-880619-09-1) is a book by Meher Baba that has had seven editions since 1939 and is still in print. Avatar Meher Baba Ki Jai! Spiritual Path: Avatar Meher Baba Anthology. Meher Baba: The Planes Of Consciousness. Involution of Liberating Consciousness When the consciousness of the soul is ripe for disentanglement from the gross world, it enters the spiritual path and turns inwards. Its gross impressions now become less deep. They become fainter or more subtle, with the result that the soul now becomes subtle-conscious. A Guide to Life Eternal. AGENTS are men and women who work on the inner planes of consciousness for Perfect Masters and the Avatar. There are also discarnate Agents who are of a different line of evolution. ANGELS are beings who live in the inner planes.

ARCHANGELS are beings who live between the sixth and seventh plane. A Guide to Life Eternal.