Feminism. Star Wars: a salute to black Stormtroopers. I hated always having to play Lando Calrissian as a child, that one unsavory crumb of a Negro character George Lucas tossed our way in The Empire Strikes Back. 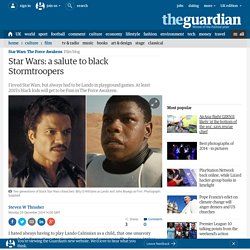 I was born in August of 1977, the same summer Star Wars came into the world. Even as fanboys around the world sport Jedi erections a full year before Episode VII hits theatres in time for Christmas 2015, it’s hard to put into perspective how much bigger Star Wars was for a 1980s child. The Force was the the cultural rudder guiding my childhood, and we didn’t need video games or expensive cosplay to enter the Star Wars universe back then. Yes, those years were full of Topps trading cards and Kenner toys, but they were also full of actually re-enacting Star Wars characters ourselves, as kids in the street. Everyone wanted to be Han Solo or Luke Skywalker. I hated playing Lando. I hated playing what was obviously a second-rate character. Why innocent people plead guilty.

On Sept. 18, 2000, Walter Bowman was shot in the chest during an armed burglary at his home, dying shortly after on the way to the hospital. 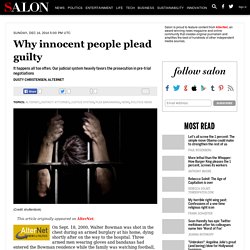 Three armed men wearing gloves and bandanas had entered the Bowman residence while the family was watching football, shot Bowman amidst the confusion and fled the scene immediately. Tips led police to concentrate on six possible suspects, including Kenneth Kagonyera and Robert Wilcoxson. After a series of interrogations, three of the suspects implicated themselves and various combinations of the others. Eventually, Kagonyera, Wilcoxson and three others pled guilty and were sent to jail for Bowman’s murder.

However, there was a problem with their admissions of guilt: they appear to have been entirely untrue. DNA evidence found on the bandanas and gloves excluded all six of the defendants, and in 2003 another man, Robert Rutherford, came forward and confessed to committing the crime with two others. 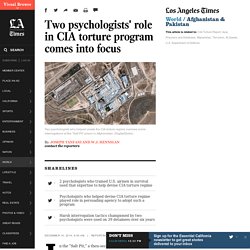 "It was thoroughly planned and rehearsed," Jessen later explained, according to a CIA investigator's report. "They dragged him outside, cut off his clothes and secured him with Mylar tape," before beating him and forcing him to run wearing a hood. When he fell, they dragged him down dirt passageways, leaving abrasions up and down his body. Jessen added a critique. "After something like this is done, interrogators should speak to the prisoner to give [him] something to think about," he told the investigator. 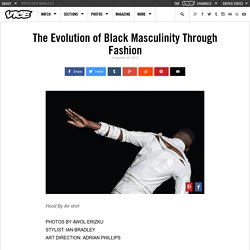 Claire, Keem White, Magor Mbengue, Renald Seme, Ro¯ze Traore, Yunis Torres All eyes were on Shayne Oliver as he stepped into a sweltering Bronx church in the heat of summer, 2000. The lanky teenager shuffled into the vestibule wearing a short white crop top, exposing his taut midriff. Blots of black skin poked through hand-tattered jeans that were so tight he had to cut them up and safety-pin them back together to get them on. Shayne's now 25 and the designer of menswear label Hood By Air, whose provocative styles—along with brands like Telfar and Third Floor—are carving out a new and empowering palette of masculinity for young black men to paint from. Transphobic hate crimes rising in UK, police say. Some of the UK’s biggest police forces have recorded a rise in transphobic hate crimes this year, with victims subjected to assaults, verbal abuse and harassment on the street. 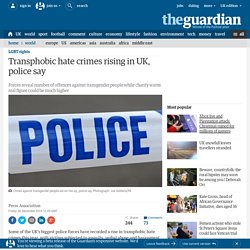 But there are fears the number of offences could be much higher after a leading charity warned crimes against transgender people were “massively under-reported”. Eleven forces revealed they recorded more transphobic hate crimes between January and November than the whole of 2013, according to figures released to the Press Association under the Freedom of Information Act. The Metropolitan police, the country’s largest force, saw offences against transgender people soar by 44% in 2014, with 95 crimes recorded – up from 66 last year and 59 in 2012.

They included 53 harassment offences this year, 17 common assaults, seven grievous bodily harm offences and seven assaults with injury. These 11 Speeches from the Last Two Centuries Changed the World. Rachel Rolnick, a student at Stern College for Women, is an HNN intern. 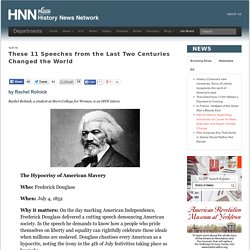 The Hypocrisy of American Slavery Who: Frederick Douglass When: July 4, 1852 Why it matters: On the day marking American Independence, Frederick Douglass delivered a cutting speech denouncing American society. In the speech he demands to know how a people who pride themselves on liberty and equality can rightfully celebrate these ideals when millions are enslaved.

Memorable quote: “What, to the American slave, is your Fourth of July? The Gettysburg Address Who: President Abraham Lincoln.