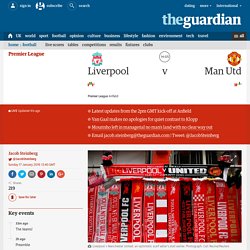 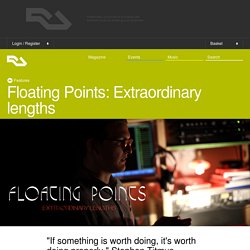 As a DJ, Sam Shepherd blends all kinds of seemingly disparate styles. See him play and you're as likely to hear meditative jazz or psychedelic Brazilian songs as anything you'd call dance music. Often the records he plays are incredibly sought after. Gilles Peterson, a DJ who shares Shepherd's taste for rare records, traded his Mitsuoka, a Japanese car that looks like a Jaguar MK II, for Shepherd's 7-inch copy of João Donato's Amizonas. As a producer, he's made music that's both critically acclaimed and stylistically diverse. Shepherd's skill-set is as diverse as his music. This list of achievements is even more mind-boggling when you consider that until last year his music career was something of a side project. "I would leave early every Friday, sneak my record bag into uni and go straight to Heathrow," said Shepherd. 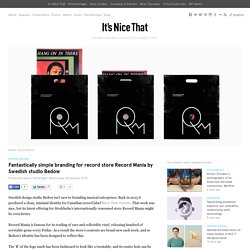 Back in 2013 it produced a clean, minimal identity for Canadian record label More Than Human. That work was nice, but its latest offering for Stockholm’s internationally renowned store Record Mania might be even better. Record Mania is famous for its trading of rare and collectible vinyl, releasing hundred of covetable gems every Friday.

Hötorgshallen Saluhall. The Cutlery Chronicles: SWEDEN: eating in Stockholm. Sweden is a country I’ve longed to visit for some time; particularly its capital of fourteen islands, Stockholm.I’ve only ever heard great things about the quality of life here – one of the most unpolluted cities in the whole of Europe with waters so clean you can, and are actively invited to, fish for salmon in them. 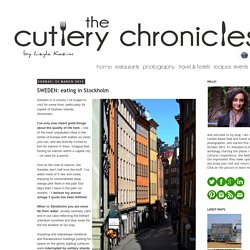 Imagine that, fishing for salmon within a capital city – no need for a permit. And on the note of salmon, the Swedes don’t half love the stuff. Money Money Money* One thing you may have heard about Stockholm is that it can be pricey. People have provided similar warnings about a lot of cities I’ve visited – New York, Reykjavik, even my home town of London itself – none of which I’ve found to be particularly expensive. It's not that these restaurants are particularly high-end, it's just that these are the average prices of eateries in Stockholm. *ABBA reference intended Breakfast You would be correct in thinking that this is quite a lot of food for one sitting. The foodie traveller … in Stockholm: the new take on coffee and cake. 10 Ways to Visit Stockholm on a Budget. An urbanist's guide to Stockholm: ‘Find your own secret space and own it' My name is Lola Akinmade Åkerström. 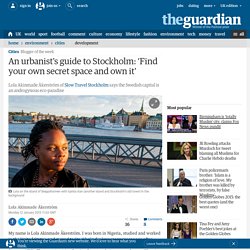 I was born in Nigeria, studied and worked in the United States, and moved to Stockholm for love many moons ago after giving up my life as a system architect working with Geographic Information Systems (GIS). That was in 2009. Coming from two boisterous cultures – Nigerian and American – Sweden as a whole was an initial shock to the system. Life slowed down tremendously and the words “work-life balance” slowly crept into my psyche. Today, I’m a freelance travel writer and photographer who contributes to many major publications. Spread out across 14 islands with tons of nooks and crannies (read: hole-in-the-wall cafés) for hiding out - from historic Gamla stan and lush Djurgården to vibrant Södermalm – Stockholm today feels more like the Silicon Valley of Scandinavia pushing out tonnes of wildly successful startups (Spotify and Skype anyone?) Stockholm: the only European capital you can explore by kayak.

What to do Modern artIf you want an authentic modern art experience in Stockholm, plan for two stops outside the city centre. 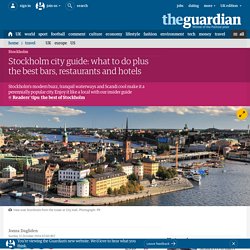 First up is Färgfabriken, in a former paint and soap factory. This is an exhibition space and platform for experimental art and architecture and also offers talks and workshops. The building itself, dating from 1902, is beautiful; make sure to take it all in while enjoying a traditional Swedish fika in the cafe. The second stop is Marabouparken, to the north of Stockholm. Hornstulls street market. Stockholm + Food and drink. Stockholm's top 10 good value restaurants. Gro Just over a year ago, chefs and former colleagues Henrik Norén and Magnus Villnow realised their dream of opening a small restaurant serving simple, honest, almost exclusively local food where grönsaker (vegetables; literally "green things") are the stars. 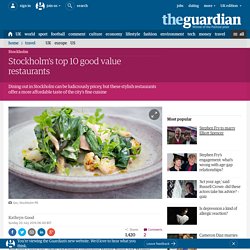 A dish of cauliflower, bacon and cress, for example, uses cauliflower five different ways: puréed with brown butter, roasted florets, raw shaved root, raw leaves and pickled stem. Lunch is chalked up on a blackboard daily with four choices (100 SEK/£9 each). Dinner is currently served once a week, on Thursdays.• Four-course lunch for £43. Sankt Eriksgatan 87, grorestaurang.se, +46 8643 4222 Nook Claes Grännsjö's fusion cooking takes inspiration from all over the world, but you'll notice a particular nod to Korea – the country of his birth – at newly opened Nook. Oaxen Slip Nytorget 6 The guys behind Nytorget 6 have got the formula right with this local brasserie on hip Södermalm. Stockholm. Östermalms Saluhall. Free travel guide to Stockholm, Sweden. Stockholm guide. Illustration by julia rothman today’s city guide comes swedish-american art director & stylist joanna swanson. joanna is based in sweden and today will be sharing her local’s guide to shopping, eating, entertainment, lodging and site-seeing in stockholm! 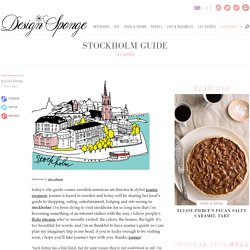 I’ve been dying to visit stockholm for so long now that i’ve becoming something of an internet stalker with the way i follow people’s flickr streams who’ve recently visited. the colors, the homes, the light- it’s too beautiful for words. and i’m so thankful to have joanna’s guide so i can plan my imaginary trip in my head. if you’re lucky enough to be visiting soon, i hope you’ll take joanna’s tips with you. thanks, joanna! Destination guide: Stockholm.