Still Yet Already English Grammar Rules. Three adverbs that often cause difficulty are still, yet, and already. 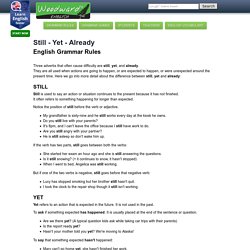 They are all used when actions are going to happen, or are expected to happen, or were unexpected around the present time. Here we go into more detail about the difference between still, yet and already: Still is used to say an action or situation continues to the present because it has not finished. It often refers to something happening for longer than expected. Notice the position of still before the verb or adjective. My grandfather is sixty-nine and he still works every day at the kiosk he owns.

If the verb has two parts, still goes between both the verbs: She started her exam an hour ago and she is still answering the questions. But if one of the two verbs is negative, still goes before that negative verb: Lucy has stopped smoking but her brother still hasn't quit. Yet refers to an action that is expected in the future. To ask if something expected has happened. Adverbes : Still, yet et already-anglais. Still, yet et already Still, yet et already sont des adverbes servant à définir des actions en cours dans le présent ou dans le futur très proche. 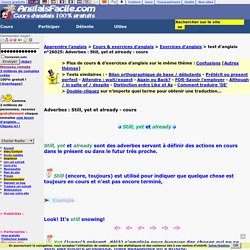 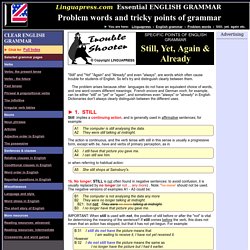 So let's try and distinguish clearly between them. The problem arises because other languages do not have an equivalent choice of words, and one word covers different meanings; French encore and German noch, for example, can be either "still" or "yet" or "again", and sometimes even "always" or "already" in English. Dictionaries don't always clearly distinguish between the different uses. Still implies a continuing action, and is generally used in affirmative sentences; for example: A1 The computer is still analysing the data. The action is continuous, and the verb tense with still in this sense is usually a progressive form, except with be, have and verbs of primary perception, as in A3 I still have that picture you gave me. 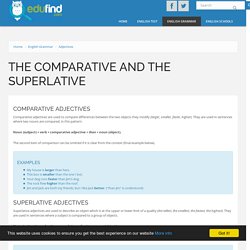 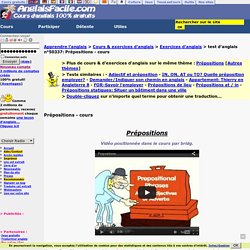 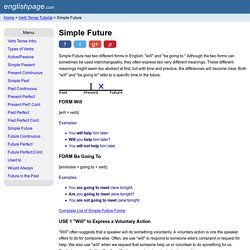 " Although the two forms can sometimes be used interchangeably, they often express two very different meanings. These different meanings might seem too abstract at first, but with time and practice, the differences will become clear. Both "will" and "be going to" refer to a specific time in the future. FORM Will [will + verb] Examples: You will help him later. FORM Be Going To [am/is/are + going to + verb] You are going to meet Jane tonight. Complete List of Simple Future Forms USE 1 "Will" to Express a Voluntary Action "Will" often suggests that a speaker will do something voluntarily. I will send you the information when I get it.