Apple's broken promise: why doesn't iCloud 'just work'? Password denied: when will Apple get serious about security? 119inShare Jump To Close Last Friday, The Verge revealed the existence of a dead-simple URL-based hack that allowed anyone to reset your Apple ID password with just your email address and date of birth. 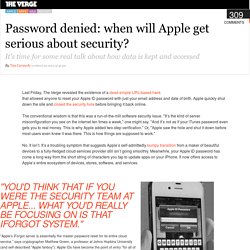 Apple quickly shut down the site and closed the security hole before bringing it back online. The conventional wisdom is that this was a run-of-the-mill software security issue. "Apple's iForgot server is essentially the master password reset for its entire cloud service," says cryptographer Matthew Green, a professor at Johns Hopkins University (and self-described "Apple fanboy"). "You'd think that if you were the security team at Apple, and you had limited resources to devote to any part of the system, what you'd really be focusing on is that iForgot system," adds Green. Aquamacs: Emacs for Mac OS X. 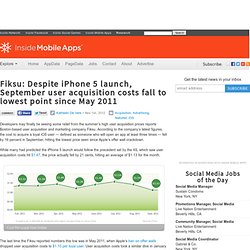 According to the company’s latest figures, the cost to acquire a loyal iOS user — defined as someone who will open an app at least three times — fell by 16 percent in September, hitting the lowest price seen since Apple’s offer wall crackdown. While many had predicted the iPhone 5 launch would follow the precedent set by the 4S, which saw user acquisition costs hit $1.47, the price actually fell by 21 cents, hitting an average of $1.13 for the month. The last time the Fiksu reported numbers this low was in May 2011, when Apple’s ban on offer walls dropped user acquisition costs to $1.10 per loyal user.

User acquisition costs took a similar dive in January 2012, falling to $1.14 after the holiday advertising frenzy subsided. iPad is the new IE6. Imagine you are working on a project targeted for the iPad, Chrome and Safari that should contain an interactive HTML5 video… Design and feature-wise the project seems pretty simple and since you assume that the newest Webkit browsers have a good support for CSS3/HTML5/JavaScript (and Steve Jobs says it’s “amazing”) you shouldn’t have any issues building it, especially since you have coded many video players and interactive videos using Flash before and you are pretty experienced with HTML/JS projects and have used HTML5 video and CSS transitions/animations on a couple other projects.. 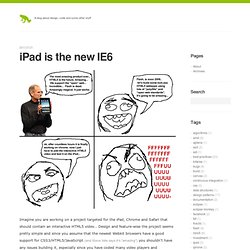 A couple weeks of development should be fine… – Now you have a big problem. Sebastian Kübeck's Weblog. Running Android on the iPhone. We Recommend These Resources I'm sure by now that most people with an interest in Android and mobile technologies would have seen this video of the Linux on the iPhone guys running Android on an iPhone. 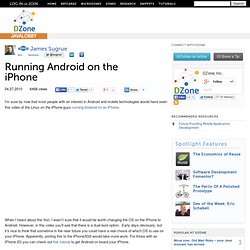 When I heard about this first, I wasn't sure that it would be worth changing the OS on the iPhone to Android. However, in this video you'll see that there is a dual boot option. Early days obviously, but it's nice to think that sometime in the near future you could have a real choice of which OS to use on your iPhone. Apparently, porting this to the iPhone3GS would take more work. I'm in no rush to use Android on my iPhone. That particular issue could be the tipping point for full Android adoption. While we're talking about mobile, PayPal have presented an offering for the Android and iPhone app stores which would allow customers to pay for apps using their service. Meet our friend from Cupertino… - Hexxeh's Blog. Since I'm launching this new design, let's begin with a few updates on various projects. 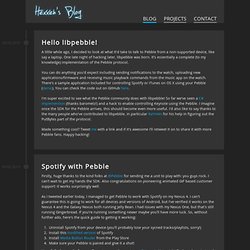 Raspberry Pi - Status: Hiatus I'd still like to see Chrome on Raspberry Pi fly, but I don't have time for it at present, and I'm kinda at a dead end in terms of where to go with it. It's not dead, so I might have something to share with you in the future for this one. The real reason why Steve Jobs hates Flash. There has been some ... interesting news from the tech sector this week. 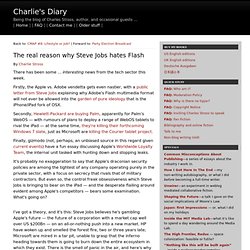 Firstly, the Apple vs. Adobe vendetta gets even nastier, with a public letter from Steve Jobs explaining why Adobe's Flash multimedia format will not ever be allowed into the garden of pure ideology that is the iPhone/iPad fork of OSX. Secondly, Hewlett-Packard are buying Palm, apparently for Palm's WebOS — with rumours of plans to deploy a range of WebOS tablets to rival the iPad — at the same time, they're killing their forthcoming Windows 7 slate, just as Microsoft are killing the Courier tablet project.

Finally, gizmodo (not, perhaps, an unbiased source in this regard given current events) have a fun essay discussing Apple's Worldwide Loyalty Team, the internal unit tasked with hunting down and stopping leaks.