The Apple standoff should make us rethink our surrender to the phone. It certainly wasn’t how you imagine a bank robbery to be. 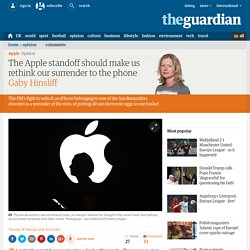 There were no men with sawn-off shotguns or screaming cashiers lunging for panic buttons. It all happened so peacefully and invisibly that I would never have noticed had I not been logging into my bank account online last month, only to find that nothing worked. Shortly afterwards, HSBC confirmed it had been forced to defend its systems from a criminal attack. Nothing seems to have been stolen, so perhaps it was just hackers messing around. But increasingly, this is how bank robberies happen. Apple’s idea of an apocalypse is a world without apps. 15 reasons your brand should be on Snapchat. Forbes Welcome. Britons 'love smartphones and selfies' - BBC News.

Image copyright Getty Images Smartphones have edged ahead of laptops for the first time as the preferred devices for connecting online in the UK, a report by Ofcom says. 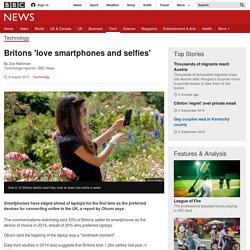 The communications watchdog said 33% of Britons opted for smartphones as the device of choice in 2014, ahead of 30% who preferred laptops. Ofcom said the toppling of the laptop was a "landmark moment". Data from studies in 2014 also suggests that Britons took 1.2bn selfies last year, it said. Some 31% of Britons said they had taken a picture of themselves in the past year, with one in 10 adults taking at least one per week, Ofcom added. Backing up pictures It said that the rise in smartphones with increasingly good cameras was potentially fuelling the craze. The smartphone was found to be more popular than the digital camera for taking and storing photos in 2014, with 60% of adults and 89% of 16 to 24 year olds using their phone for photography. 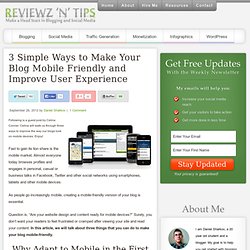 Celina will walk us through three ways to improve the way our blogs look on mobile devices. Enjoy! Fast to gain its lion share is the mobile market. Almost everyone today browses profiles and engages in personal, casual or business talks in Facebook, Twitter and other social networks using smartphones, tablets and other mobile devices. As people go increasingly mobile, creating a mobile-friendly version of your blog is essential. Question is, “Are your website design and content ready for mobile devices?” Samsung Galaxy S4: The Smart Phone Line. Taxi technology: Why catching a cab will never be the same. 6 Powerful Ways to Improve Your Social Mobile Marketing. Are your customers and prospects wandering around with smart phones? 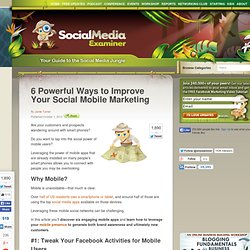 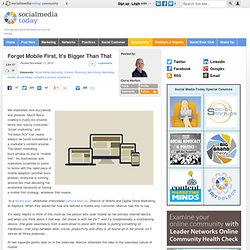 Apple - iPhone 5 - TV Ad - Photos Every Day. Social Media Changing the Way FEMA Responds to Disasters. More than 70 percent of people in disaster situations use social media to let their families and friends know that they are OK, according to a University of San Francisco survey. 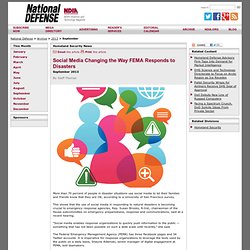 This shows that the use of social media in responding to natural disasters is becoming crucial to emergency response agencies, Rep. Susan Brooks, R-Ind., chairwoman of the House subcommittee on emergency preparedness, response and communications, said at a recent hearing. “Social media enables response organizations to quickly push information to the public — something that has not been possible on such a wide scale until recently,” she said. The Federal Emergency Management Agency (FEMA) has three Facebook pages and 34 Twitter accounts. It is imperative for response organizations to leverage the tools used by the public on a daily basis, Shayne Adamski, senior manager of digital engagement at FEMA, told lawmakers.

Developing a Mobile Strategy. Online, Social, and Mobile: The future of the video games industry. Introduction: A fundamental shift Figure 1 shows the remarkable transformation that the industry has gone through in the last 10 to 15 years. 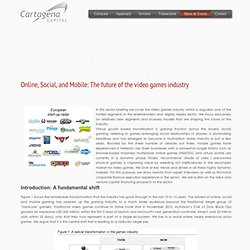 The advent of online, social and mobile gaming has opened up the gaming industry to a much wider audience beyond the traditional target group of ‘hardcore’ gamers. Traditional video games continue to thrive (note that in November 2010, Activision’s Call of Duty Black Ops grossed an impressive USD 650 million within the first 5 days of launch and Microsoft's next generation controller, Kinect, sold 25 million units within 25 days); only that they now represent a part of a larger ecosystem. We live in a world where nearly everybody plays games.