Rating list. Bots. Progs and Boards. Programmazione. Old. Lezioni. Lc0. Human Rating. Aperture. Finali and database. Youtube. ImmortalChessForum - Login. Chess Rating Comparison - Lichess vs Chess.com. Rating Comparisons One of the most common questions in the chess world is how your rating compares to other measurements. 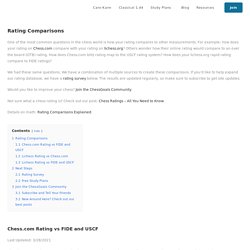 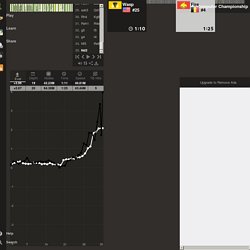 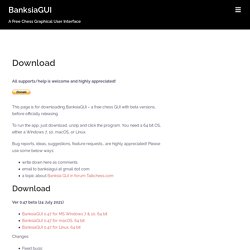 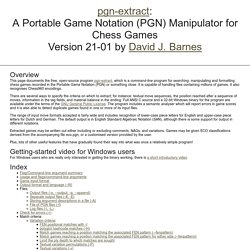 It is capable of handling files containing millions of games. It also recognises Chess960 encodings. There are several ways to specify the criteria on which to extract; for instance: textual move sequences, the position reached after a sequence of moves, information in the tag fields, and material balance in the ending. Full ANSI C source and a 32-bit Windows binary for the program are available under the terms of the GNU General Public License. The range of input move formats accepted is fairly wide and includes recognition of lower-case piece letters for English and upper-case piece letters for Dutch and German. Extracted games may be written out either including or excluding comments, NAGs, and variations. PGN_Reference. Chess Links and Websites. Ormulogun. Ormulogun is now loading its scripts. 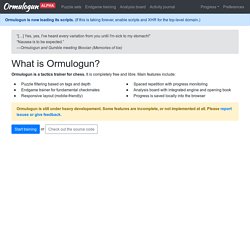 (If this is taking forever, enable scripts and XHR for the top-level domain.) “[…] Yes, yes, I've heard every variation from you until I'm sick to my stomach!” “Nausea is to be expected.” —Ormulogun and Gumble meeting Itkovian (Memories of Ice) Stockfish Evaluation Guide. Chess Games Links maintained by Lars Balzer - Links to chessgames around the internet which you can download for free. QUICK NAVIGATION THROUGH ChessGamesLinks:[worldwide links][national links][current supporters][update-newsletter][guestbook][supporting my work][advertising] ChessGamesLinks. 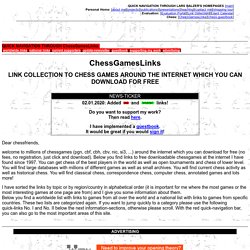 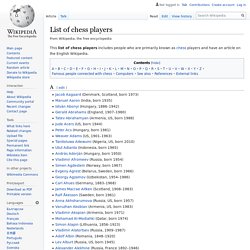 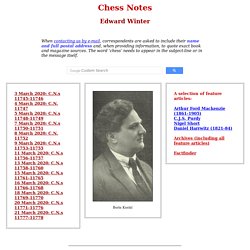 F.D. Yates Concerning the forenames of F.D. Yates (see, in particular, C.N.s 7910 and 11545), we wonder when the now-discredited form ‘Frederick Dewhurst Yates’ first appeared in print, i.e. what antedates the obituary by P.W. Sergeant on pages 525-528 of the December 1932 BCM, which had two occurrences on the first page: See too the heading of a letter from W.H. 11746. 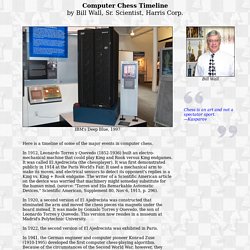 In 1912, Leonardo Torres y Quevedo (1852-1936) built an electro-mechanical machine that could play King and Rook versus King endgames. It was called El Ajedrecista (the chessplayer). It was first demonstrated publicly in 1914 at the Paris World's Fair. It used a mechanical arm to make its moves, and electrical sensors to detect its opponent's replies in a King vs. In 1920, a second version of El Ajedrecista was constructed that eliminated the arm and moved the chess pieces via magnets under the board instead. In 1922, the second version of El Ajedrecista was exhibited in Paris. In 1941, the German engineer and computer pioneer Konrad Zuse (1910-1995) developed the first computer chess-playing algorithm. In 1942, Zuse began writing a computer chess program in Plankalkul (high-level programming language) on punched cards. 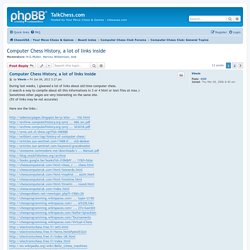 I found some info here . As I remember the first Rybka 1.0 beta was 100 elo stronger than close opponents and there was a new release about each year, each about 100 elo stronger than the previous one.In those years appeared on the top too : Naum Zappa Fruit You'll find all of them on the SSDF lists and their history in Wiki's.The followers still the same : Shredder, Hiarcs, Junior, Fritz.Vincent Yes, thanks. The links from the wonderful chess programming wiki to archived SSDF lists is a good record of progress from 1995-2009. Computer_chess:wiki:links - Computer Chess Wiki. Your trusted source for computer chess information! Links. Chess Fonts for Diagrams and Figurine Notation. With chess fonts you can make chess diagrams or print games with figurine notation. On this page you can view and download fonts. A chess fonts is a flexible tool and allows you to easily change style and layout.

DGS - Dragon Go Server. G 6 - Gruppo Scacchi e Informatica (gsei) Home - Computer Chess Wiki. Your trusted source for computer chess information! If you like Computer Chess, then you will love our site! It is the best place to discover hard-to-find information about how to download, set up, and run chess engines – both free and commercial – in various chess GUIs such as: Winboard, Arena, Chessbase, etc.

We urge you to join us by hitting the 'Login' button at the top right of this page. (Find more information here.) There's no fees and there's no tiresome ads here at the wiki or by email. People sometimes get lost in wikis. Table Of Contents - A box at the upper right helps you navigate the current page Navigation - A box at the upper left lists popular choices Search - This is a box on the left side. Main Sections of this Site.