MUIRs of Rowallen Castle - General - Family History & Genealogy Message Board - Ancestry.co.uk. Full text of "The historie and descent of the house of Rowallane" Full text of "History of the County of Ayr : with a genealogical account of the families of Ayrshire" Clan Montgomery. Clan Montgomery is a Lowland Scottish clan. 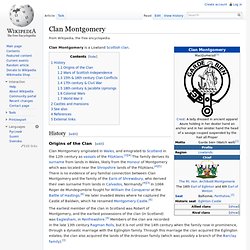 History[edit] Origins of the Clan[edit] The earliest member of the clan in Scotland was Robert of Montgomery, and the earliest possessions of the clan (in Scotland) was Eaglesham, in Renfrewshire.[4] Members of the clan are recorded in the late 13th century Ragman Rolls, but it is not until the 14th century when the family rose in prominence, through a dynastic marriage with the Eglington family.

Through this marriage the clan acquired the Eglington estates; the clan also acquired the lands of the Ardrossan family (which was possibly a branch of the Barclay family).[3] Wars of Scottish Independence[edit] 15th & 16th century Clan Conflicts[edit] The Tournament bridge and Eglinton castle in 1876. Summary. Summary James Hamilton & Hugh Montgomery The Founding Fathers Of The Ulster-Scots James Hamilton (1559 - 1644) and Hugh Montgomery (1560 - 1636) were born in Ayrshire and grew up only five miles away from each other. 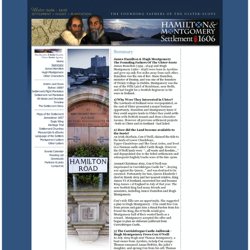 Hamilton was the son of Rev. Hans Hamilton, minister of Dunlop, and was one of the founders of Trinity College in Dublin. Montgomery was the son of the Fifth Laird of Braidstane, near Beith, and had fought for a Scottish Regiment in the wars in Holland. 1) Why Were They Interested in Ulster? Full text of "Moir genealogy and collateral lines, with historical notes" Griffith's Valuation. Ireland's History in Maps - Ancient Uladh, Ulidia, the Kingdom of Ulster. Background on Uladh Some of the early "references" of tribal names in Ulster come to us from scholars translating the map of Ireland that Ptolemy provided in the middle of the 2nd century. 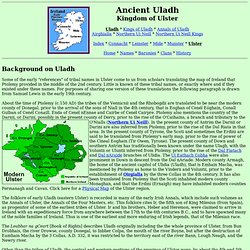 Little is known of these tribal names, or exactly where and if they existed under these names. For purposes of sharing one version of these translations the following paragraph is drawn from Samuel Lewis in the early 19th century. About the time of Ptolemy (c.150 AD) the tribes of the Vennicnii and the Rhobogdii are translated to be near the modern county of Donegal, prior to the arrival of the sons of Niall in the 4th century, that is Eoghan of Cenél Eóghain, Conall Gulban of Cenél Conaill, Enda of Cenél nEnnae and Cairbe of Cenél Cairpre. Ptolemy also mentions the country of the Darnii, or Darini, possibly in the present county of Derry, prior to the rise of the O'Cathains, a branch and tributary to the O'Nialls (Northern Uí Neill). The Tribes of Uladh as cited in the genealogies and annals. Ireland's History - Early Irish Tribes, Septs and Clans. History. FileDownload,2322,en.pdf.

Scotch Irish search for names. Search of THE SCOTCH-IRISH OR THE SCOT IN NORTH BRITAIN, NORTH IRELAND, AND NORTH AMERICA Source Information: Hanna, Charles A. 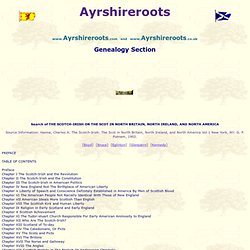 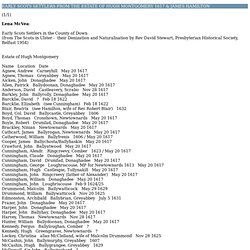 Feb 18 1622Barcklie, Elizabeth (nee Cunningham) Feb 18 1622Blair, Beatrix (nee Hamilton, wife of Rev Robert Blair) 1632Boyd, Col. Estate of James Hamilton Approx 244 individuals are listed above. Further names might be found in the 1641 depositions (40 boxes are held in Trinity), and of course the rentrolls in the Hamilton MSS. Navigation. Moore from Newtownards, County Down, Ireland c1840.

Log in. MOORE Genealogy. WikiTree is a community of genealogists on a mission to create a 100% free, single family tree. 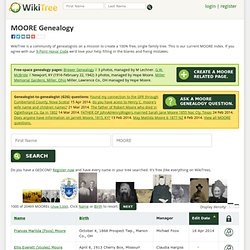 This is our current MOORE index. If you agree with our 9-Point Honor Code we'd love your help filling in the blanks and fixing mistakes. Do you have a GEDCOM? Register now and have every name in your tree searched. It's free (like everything on WikiTree). Free Family Tree Search Engine. Search Results—FamilySearch.org — Free Family History and Genealogy Records. Records available for John Moore in Ireland. Kilkeel 4. Kilkeel County Down Raymondscountydownwebsite Paper Making at Ballymagart by Dorothea Nicholson Rags make paper, Paper makes money, Money makes banks, Banks make loans, Loans make beggars, Beggars make Rags. 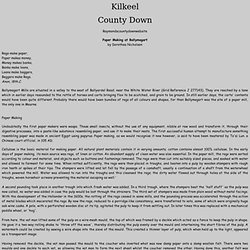 Anon, l8th.C. Ballymagart Mills are situated in a valley to the west of Ballyardel Road; near the White Water River (Grid Reference J 277143). Paper Making Undoubtedly the first paper makers were wasps. Cellulose is the basic material for making paper. A second pounding took place in another trough into which fresh water was added. Newtownards, a pictorial history - Cunningburn Townland Records. Last Update - 12 August 201317th. 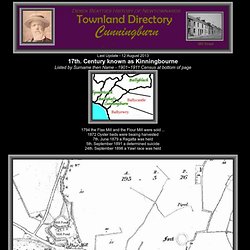 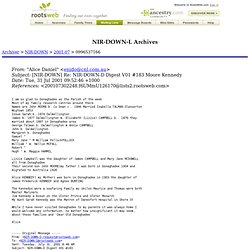 Names are John MOORE b. Co Down c.. 1846 Married Isabella TALMAN.Glasserton Wigtown 1853 Issue Sarah b..1874 Dalmellington, James b. 1877 Dalmellington m. Elizabeth (Lizzie) CAMPBELL b.. 1876 they married about 1897 in Donaghadee area George Talman b. Dalmellington m Annie CAMPBELL John b. Lizzie Campbell was the daughter of James CAMPBELL and Mary Jane MCDOWELL all from Donaghadee Their second son John MOORE(my father ) was born in Donaghadee 1904 and migrated to Australia 1926. Irish Ancestry Research Centre » Diploma in Genealogy. Our diploma will get you on the road to practicing as a genealogist. 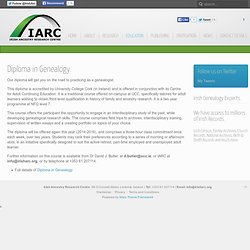 This diploma is accredited by University College Cork (in Ireland) and is offered in conjunction with its Centre for Adult Continuing Education. It is a traditional course offered on-campus at UCC, specifically tailored for adult learners wishing to obtain third level qualification in history of family and ancestry research. It is a two year programme at NFQ level 7.

Wigtownshire genealogy. If you are uncertain of the location of a place in Wigtownshire, try searching the Where in Wigtownshire is ... ? Pages which locate 1200 places in the county. Once you have located the parish, go to the relevant parish page where a link to Places in .... parish takes you to a selection of online historical and modern maps. Archives, Libraries and Museums National collections, all with material concerning Wigtownshire: The ScotlandsPeople Centre in Edinburgh provides easy access to Scottish records for family historians. Return to top of page Internet collections: Google Books, the Open Library, the Internet Archive texts and HathiTrust all have scanned copies of historical books about Wigtownshire. Local collections: Wigtownshire Genealogy - Looking 4 Kin Genealogy & Family History Network.

The Wigtownshire Pages: Census of 1851 Heads of Household Index, Glasserton. Return to homeReturn to Parish Page Return to Census infoView other parishes - 51 IndexThe following census information was transcribed from Crown public records by Mr.John Roy. Though every effort was made to retain the integrity of the census, we assume no responsibilities for errors or omissions.

Twenty-two miles from Belfast. Chief exports are Cattle and Farm Produce. Geograph Ireland - photograph every grid square! Gallery - The Shamrock and the Maple Leaf. Archived Content This archived Web page remains online for reference, research or recordkeeping purposes. This page will not be altered or updated. Web pages that are archived on the Internet are not subject to the Government of Canada Web Standards.