Importance of declaring the right cargo weight. Misdeclaration of container weights has been an issue that has been going on for a long time and has plagued many a shipping line, ship and port operators.. 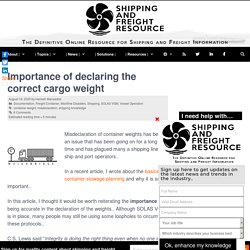 In a recent article, I wrote about the basics of container stowage planning and why it is so important.. In this article, I thought it would be worth reiterating the importance of being accurate in the declaration of the weights.. Although SOLAS VGM is in place, many people may still be using some loopholes to circumvent these protocols.. C.S. Lewis said “Integrity is doing the right thing even when no one is watching“, its something like that.. It boils down to people taking “personal” responsibility to be honest and correct in the declaration of weights whether it is verified by someone else or not.. 'We need to sail greener, not slower, to cut vessel emissions' - The Loadstar.

© Mrdoomits Policy director of the UK Chamber of Shipping Anna Ziou has slammed French proposals to impose speed limits as a way to cut shipping emissions, She claims it would give a “false impression” of the industry taking action. 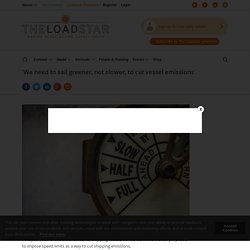 Ms Ziou’s objection follows an outcry from container lines following the French IMO delegation’s proposals becoming public last month. “To achieve a 50% cut in emissions, the shipping industry needs continued investment in green technologies that will allow ships to conduct their business through a range of low-carbon fuels, such as battery power, hydrogen fuel cells or even wind power,” said Ms Ziou. “Shipowners have already limited speeds considerably in the past decade and while these proposals are well-intentioned, slow-steaming as a low-carbon [plan] is just not good enough. Ms Ziou noted that if selected, the plan could penalise companies developing and installing low-carbon technologies and could discourage “meaningful” attempts at cutting emissions. Yantian Express progress delayed as some cargo owners refuse to pay general average - The Loadstar.

Two-thirds of the owners of cargo on the fire-hit Yantian Express face further costs to retrieve their goods after others failed to contribute towards general average. 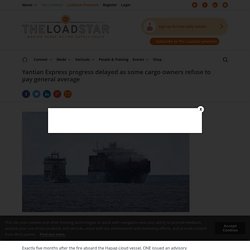 Exactly five months after the fire aboard the Hapag-Lloyd vessel, ONE issued an advisory that general average and salvage security had still not been posted for a third of the affected containers. One shipping source told The Loadstar this would “almost definitely” result in higher costs for cargo owners that did contribute towards the general average as administrators look to recoup the money.

“Maybe that one-third of owners realised it was not financially viable, or worthwhile, paying general average as, once paid, they would have to not only retrieve the cargo but then find someone to sell it to,” said the source. MT 'Cape Bonny' Tankschiffahrts GmbH & Co KG v Ping AN Property and Casualty Insurance Company of China Ltd & Anor, Court of Appeal - Commercial Court, December 04, 2017, [2017] EWHC 3036 (Comm) - Case Law - VLEX 698383269. 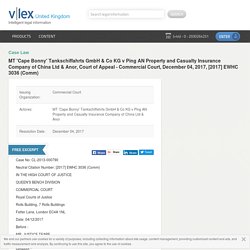 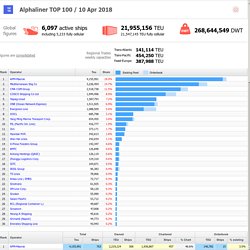 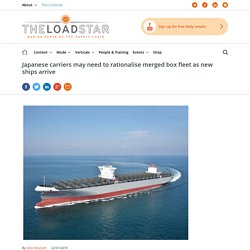 The container businesses of three Japanese carriers will merge on 1 April, but K Line, along with MOL and NYK, will still be taking delivery of vessels ordered prior to the decision to consolidate their traffic into Ocean Network Express (ONE). According to the orderbooks, MOL has one 20,182 teu ULCV to be delivered this year, while NYK is to receive a further seven 14,000 teu vessels – all will be added to the combined ONE fleet. Port-Liner launches first emission-free barges on Europe's waterways. Port-Liner is to roll-out the first fully electric, emission-free barges in Europe. 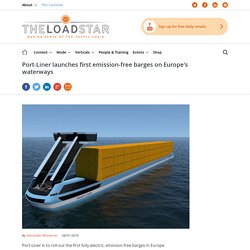 Amsterdam, Antwerp, and Rotterdam ports will host the new vessels, capable of handling 24-280 20ft containers, from August. The launch follows a sizeable investment in the technology by the European Union. Infographic: Law of the Sea And International Maritime Trade. APL launches new Trans-Atlantic service. DNV GL analyses changing energy use to 2050. DNV GL has released a new Energy Transition Outlook (ETO) to 2050 that forecasts the effects that changes in the energy mix will have on shipping over the next three decades. 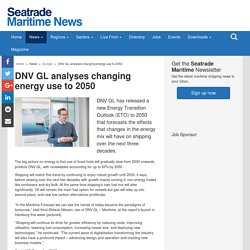 The big picture on energy is that use of fossil fuels will gradually slow from 2030 onwards, predicts DNV GL, with renewables accounting for up to 50% by 2050. Shipping will match this trend by continuing to enjoy robust growth until 2030, it says, before slowing over the next two decades with growth mainly coming in non-energy trades like containers and dry bulk. At the same time shipping’s own fuel mix will alter significantly. Oil will remain the main fuel option for vessels but gas will step up into second place, and new low carbon alternatives proliferate.

The Suez Canal Authority (SCA) is extending toll discounts for dry bulk vessels until the end of 2018. 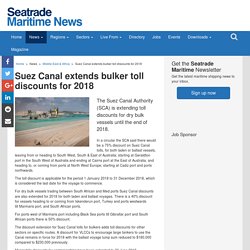 In a circular the SCA said there would be a 75% discount on Suez Canal tolls, for both laden or ballast vessels, leaving from or heading to South West, South & East of Australia; starting at Geraldton port in the South West of Australia and ending at Cairns port at the East of Australia, and heading to, or coming from ports at North West Europe; starting at Cadiz port and ports northwards. The toll discount is applicable for the period 1 January 2018 to 31 December 2018, which is considered the last date for the voyage to commence.

For dry bulk vessels trading between South African and Med ports Suez Canal discounts are also extended for 2018 for both laden and ballast voyages. There is a 40% discount for vessels heading to or coming from Iskenderun port, Turkey and ports westwards till Marmaris port, and South African ports. Shipping getting onboard the blockchain train. The supply chain is “the nirvana of blockchains” with many applications where they can be employed. 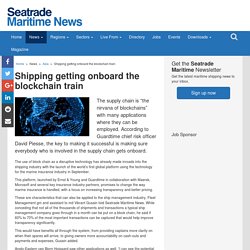 Scientists Wary About Environmental Effects Of Canal-Building Project In Nicaragua. Scientists are concerned about the adverse environmental effects of the construction of the Nicaragua Canal. The project is estimated to be completed by 2019, and around 5,100 ships may pass via the canal each year. (Photo : Rice University) Scientists are concerned about the environmental impact of the building of the Nicaragua Canal. The Nicaragua Interoceanic Grand Canal project aims to connect the Atlantic Ocean to the Pacific Ocean. The construction of the canal entails cutting through Lake Cocibolca, also known as Lake Nicaragua, which is Central America's key freshwater reservoir and also the biggest tropical freshwater lake found in North and South America. The world's biggest ship - for 53 days. 7 January 2015Last updated at 19:56 ET By Justin Parkinson BBC News Magazine The world's largest container ship, the Globe, is docking in Britain for the first time as it continues its maiden voyage.

But how vast and powerful is it and how long until it's superseded? Size. Volume Calculator - Cardinal Maritime. 65 percent of shippers in JOC survey say they’ll divert from West Coast. Login - DVZ.

Hazard Cargo Gefahrgut See. Bill of Lading. Parts of a Bill of Lading - Part 1 of 4. Parts of a Bill of Lading - Part 3 of 4. Shippers "shortchanged" as more than half of all box sailings arrive late. Container shipping schedule reliability on the three main east-west trade lanes fell to a record low of 48.6% in January, according to Drewry’s latest Carrier Performance Insight report, as US west coast port congestion and the bedding in of new alliance services took their toll on vessel on-time performance levels. Infographic: The dynamics of trade - IHS Maritime 360. Approximately 70% of global trade, as measured in metric tons, was transported by ship in 2014. Energy and mining commodities – liquefied natural gas, oil, coal and minerals – accounted for 70% of all shipborne trade and will grow by 2.2 trillion tons by 2020.