Airfreight Terminology. Air Waybill An AWB is a bill of lading which covers both domestic and international flights transporting goods to a specified destination. 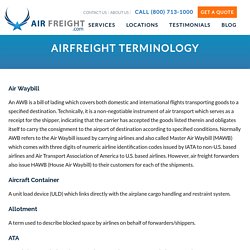 Technically, it is a non-negotiable instrument of air transport which serves as a receipt for the shipper, indicating that the carrier has accepted the goods listed therein and obligates itself to carry the consignment to the airport of destination according to specified conditions. Normally AWB refers to the Air Waybill issued by carrying airlines and also called Master Air Waybill (MAWB) which comes with three digits of numeric airline identification codes issued by IATA to non-U.S. based airlines and Air Transport Association of America to U.S. based airlines. However, air freight forwarders also issue HAWB (House Air Waybill) to their customers for each of the shipments. 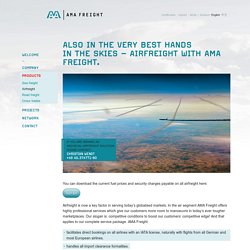 In the air segment AMA Freight offers highly professional services which give our customers more room to manoeuvre in today’s ever tougher marketplaces. Our slogan is: competitive conditions to boost our customers’ competitive edge! And that applies to our complete service package. Luftfracht Klausur 1 Flashcards. Now the hard work on the cargo agency programme really starts - Air Cargo News. Freight forwarder association Fiata and IATA have officially signed the long-awaited reforms to the IATA Cargo Agency Program and said that now the hard work of implementing the agreement begins. 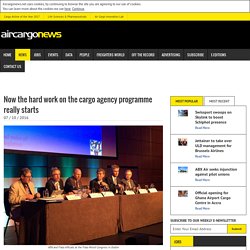 The new IATA-FIATA Cargo Agency Program (IFACP) was hailed as a “historic” agreement at an official signing ceremony held today during the Fiata World Congress in Dublin. IFCAP, which was initiated after a 2012 review of the existing programme and first unveiled in July, reflects the evolution of IATA cargo agents or freight forwarders from being ‘selling-agents’ for airlines into ‘purchasing customers’ and aims to involve forwarders as equal partners in the decision making process. Air Freight: A Market Study with Implications for Landlocked Countries. Potential markets The demand for air freight is limited by cost, typically priced 4–5 times that of road transport and 12–16 times that of sea transport. 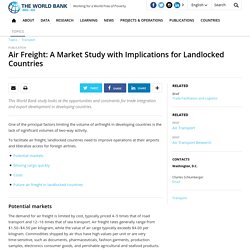 Air freight rates generally range from $1.50–$4.50 per kilogram, while the value of air cargo typically exceeds $4.00 per kilogram. Commodities shipped by air thus have high values per unit or are very time-sensitive, such as documents, pharmaceuticals, fashion garments, production samples, electronics consumer goods, and perishable agricultural and seafood products. They also include some inputs to meet just-in-time production and emergency shipments of spare parts. Air Freight Guide. Air freight is very much the premium end of the cargo business. 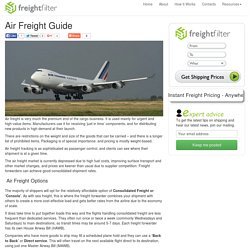 It is used mainly for urgent and high-value items. Manufacturers use it for receiving ‘just in time’ components, and for distributing new products in high demand at their launch. There are restrictions on the weight and size of the goods that can be carried – and there is a longer list of prohibited items.

Packaging is of special importance: and pricing is mostly weight-based. Air freight tracking is as sophisticated as passenger control, and clients can see where their shipment is at a given time. Cargo Aircraft Guide - Cargo Charters. Lufthansa Cargo has implemented the first part of its strategic plan to establish ‘win-win’ cargo alliances around the world. 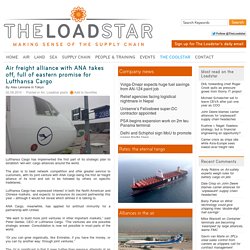 The plan is to beat network competition and offer greater service to customers, with its joint venture with ANA Cargo being the first air freight alliance of its kind and set to be followed by others on specific tradelanes. Lufthansa Cargo has expressed interest in both the North American and Chinese markets, and expects to announce its second partnership this year – although it would not reveal which airlines it is talking to. ANA Cargo, meanwhile, has applied for antitrust immunity for a partnership with United. “We want to build more joint ventures in other important markets,” said Peter Gerber, CEO of Lufthansa Cargo. “The ventures are one possible strategic answer. “Or you can grow organically, like Emirates, if you have the money, or you can try another way: through joint ventures.” Luftfrachtsicherheit - DVZ. Luftfracht: Der Airwaybill.

Thai Airways air cargo. A revamp of Thai Airways will see it end freighter operations next week with its final two 747-400BCF services. 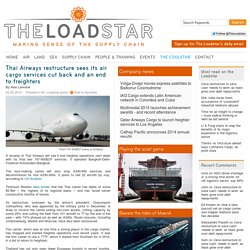 It operated Bangkok-Delhi-Frankfurt-Amsterdam-Bangkok. The loss-making carrier will also stop A340-600 services and decommission its four A330-300s. It plans to sell 22 aircraft by July, according to CH Aviation. Thomson Reuters data shows that the Thai carrier has debts of some $5.9bn – the highest of its regional peers – and has faced seven consecutive months of losses. Its restructure, overseen by the airline’s president, Charumporn Jotikasthira, who was appointed by the military junta in December, is likely to involve the carrier selling non-core assets, cutting capacity by some 20% and cutting the fleet from 101 aircraft to 77 by the end of the year – with 747s phased out as well as A340s. The carrier, which was at one time a strong player in the cargo market, has stopped and started freighter operations over recent years. Pharma helps K+N airfreight outpace the market - Aircargonews. Kuehne+Nagel beat 2014 airfreight market growth with a 5.3 per cent increase in volumes to 1.2m tonnes for the full year. 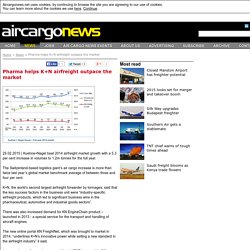 The Switzerland-based logistics giant’s air cargo increase is more than twice last year’s global market benchmark average of between three and four per cent. K+N, the world’s second largest airfreight forwarder by tonnages, said that the key success factors in the business unit were “industry-specific airfreight products, which led to significant business wins in the pharmaceutical, automotive and industrial goods sectors”. There was also increased demand for KN EngineChain product – launched in 2013 - a special service for the transport and handling of aircraft engines. The new online portal KN FreightNet, which was brought to market in 2014, “underlines K+N’s innovative power while setting a new standard in the airfreight industry” it said. In comparison to the previous year, airfreight EBIT improved by 7.2 per cent to SFr 238m. Airlines benefit from US West Coast port perishables windfall.

Port congestion on the US West Coast has led to a welcome reverse of the recent modal shift towards ocean freight for airlines operating across the Pacific. 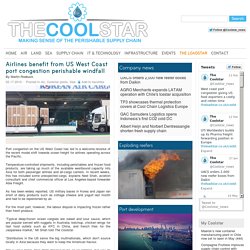 Temperature-controlled shipments, including perishables and frozen food products, are taking up much of the available westbound capacity into Asia for both passenger airlines and all-cargo carriers. In recent weeks, this has included some unexpected cargo, explains Neel Shah, aviation consultant and chief commercial officer at Los Angeles-based forwarder Able Freight. As has been widely reported, US military bases in Korea and Japan ran short of dairy products such as cottage cheese and yogurt last month and had to be replenished by air.

For the most part, however, the labour dispute is impacting frozen rather than fresh produce. Digital Subscription. Eingang. Air cargo ULD containers: internal and external dimensions. Intelligence for the Aviation Industry: Value*Performance*Reliability. Event Time Announcer – Create New Event. +1 this page: Follow us on Google+: Like/share this page: Follow us on facebook: Are you planning an event with a global audience? 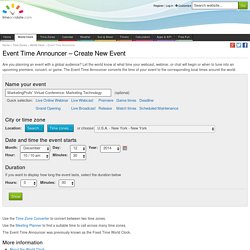 Let the world know at what time your webcast, webinar, or chat will begin or when to tune into an upcoming premiere, concert, or game. Use the Time Zone Converter to convert between two time zones. Use the Meeting Planner to find a suitable time to call across many time zones. The Event Time Announcer was previously known as the Fixed Time World Clock. Airports by Country. Top News Dreamliner B787. Facts and Figures. Air Cargo Facts & Figures On this page you will find information and some links to available air cargo facts & figures or suppliers thereof: GeneralAccording to different sources, air cargo represents less than 0.5 percent of the weight of all international cargo, while at the same time this segment represents around 30 percent of the total worldwide shipment value.

In 2012, the global aviation industry transported $6.4 trillion worth of cargo, which is actually 35% of world trade by value.According to plane maker Boeing in 2012, cargo-only aircraft or freighters handle about 60 percent of global airfreight shipments, while passenger planes fly the other 40 percent in their bellies. According to IATA, in 2012, the 240 IATA airlines together moved 42.621.000 tons of cargo. Ryanair to finalize MAX deal later this month. Largest cargo airports of the world. World Top 30 Airports. Recently Updated | World Top Airports | US Top Airports | UK Top Airports World’s Busiest Airports Over the past 10 years our website’s database has grown from around 10,000 airports around the world to now featuring over 40,000 airports, strips, fields or heliports.

This is partly because of the popularity of air travel and the lower budget flights availability which has caused an expansion in the number of airports. These are the Top 30 busiest airports in the World for 2012: Here are more of the World’s busiest airports, by passenger numbers, for 2012. Verordnung über die Inkraftsetzung der angepassten Haftungshöchstbeträge des Montrealer Übereinkommens vom 14.12.2009. Debugging a jet – Businessweek. Video Setting new standards with the A350 XWB Digital Mock-Up - dmu, as a master, version. Description: Airbus has created a bridge between the virtual and real worlds with its A350 XWB Digital Mock-Up, which provides a high-definition representation of the aircraft – right down to the smallest part[...]

Airbus has created a bridge between the virtual and real worlds with its A350 XWB Digital Mock-Up, which provides a high-definition representation of the aircraft – right down to the smallest parts – on computer screens. This very realistic digital version of the A350 XWB has literally changed the way aircraft are conceived, as it allows an accurate visualisation of where systems are located during design, how they are installed in production and what access is available for maintenance during the jetliner’s operational lifetime. Air freight volumetric (chargeable weight) calculator. Air freight calculator is based on volume measured weight also known as volumetric weight. The air freight will always be charged per kilogram against the greater weight whether it is the actual or volumetric weight. Air freight chargeable weight calculation explained 6000 cubic centimeters per kg. 366 cubic inches per kg. 166 cubic inches per lbs (pound). Example: Volumetric calculation Example: Volumetric calculation 1 pallet: 140 x 100 x 90 cm Actual Volume - 1.2 x 1.0 x 0.9 = 1.26 cubic meters Calculating Volumetric Weight 1.26 Cbm Divide / by 0.006 = 210 – This will become the volumetric weight of the shipment in Kilograms.

Saturday, 22 October 2011 at 14:01 However sea freight shipping has demonstrated that they are the most valuable, efficient and economic method of transporting heavy and also bulky consignments over long distances, this also has a share from it shortcomings. The disadvantages that relate to sea transport shipping usually do not however render it as a possible inefficient service. They only grown to be shortcomings when valuable against other modes of transport which can score better in the field of transport. The following are some of the disadvantages that an individual may encounter if you use sea freight shipping charges services. What are the advantages and disadvantages of air transport?