We Asked Women What They Think of the Term "Plus-Size" — Here's What They Had to Say. #DropThePlus. 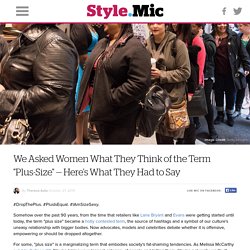 #PlusIsEqual. #IAmSizeSexy. Somehow over the past 90 years, from the time that retailers like Lane Bryant and Evans were getting started until today, the term "plus size" became a hotly contested term, the source of hashtags and a symbol of our culture's uneasy relationship with bigger bodies. Now advocates, models and celebrities debate whether it is offensive, empowering or should be dropped altogether. For some, "plus size" is a marginalizing term that embodies society's fat-shaming tendencies. We Asked Women What They Think of the Term "Plus-Size" — Here's What They Had to Say. #DropThePlus. 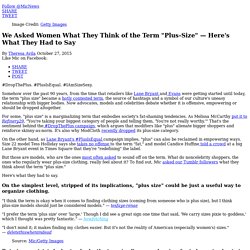 #PlusIsEqual. #IAmSizeSexy. Somehow over the past 90 years, from the time that retailers like Lane Bryant and Evans were getting started until today, the term "plus size" became a hotly contested term, the source of hashtags and a symbol of our culture's uneasy relationship with bigger bodies. High street stores should use plus-size mannequins, says Equalities Minister. <a href=" high street stores display petite and plus-sized mannequins? 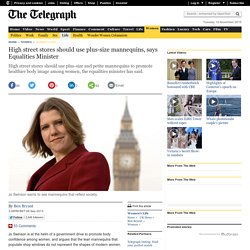 </a> The company's Oxford Street store is preparing to display a range of size 16 mannequins, and its summer catalogue included two models over 40, one over 60, an amputee and a Paralympic athlete. Swinson said: “I would really like to see more retailers doing the same. Many customers want to see more realistic images in magazines, TV and on the high street, and having mannequins that reflect and celebrate our diverse society is a really positive way of helping to achieve this. " Two years ago Topshop became embroiled in a size zero row after the company used a painfully thin model on its homepage to advertise its clothing. The image angered eating disorder sufferers and support groups who said it risked encouraging young girls to lose weight.

John Munro, a spokesman for the British Retail Consortium, said UK retailers already worked hard to promote body confidence. Plus size model Tess Holliday challenges beauty norms for photoshoot in LA. Tess was first size 26 (US 22) woman to be signed to top modelling agencyThe 29-year-old says there's 'no one way to be a woman or beautiful' She has 625,000 followers on Instagram and 850,000 fans on Facebook By Sarah Barns For Mailonline Published: 10:09 GMT, 11 May 2015 | Updated: 22:48 GMT, 11 May 2015 She's famous for proudly flaunting her curvaceous figure, bold dress sense and collection of colourful tattoos on social media. 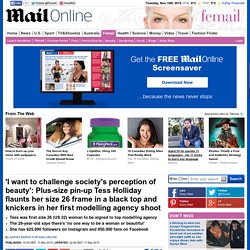 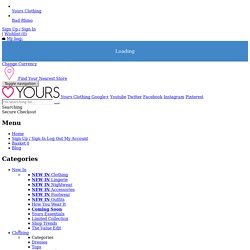 Name Charlotte Jones 2. Job Title Online Marketing Manager 3. My working day is very varied, at the moment we are filming our latest TV advert so a lot of my day is taken up with planning and signing off the edits. 4.What is the best part of your job? I love working for a company which is growing at such a fast pace. 5. I would say get involved with as many projects and opportunities as you can, experience is key. 6. I love the colour pop trend; it is amazing how a whole outfit can change by adding a splash of colour. 7.

A maxi dress! 8. Latest Fashion Trends. From the Archives: Vogue Looks Back at 120 Years of Covers. Look, I couldn’t help it! 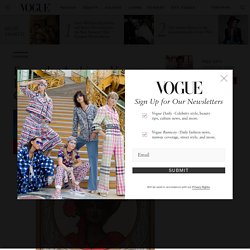 When I saw the boots, I had that instant froth-at-the-mouth, rent-is-due-but-oh-I-have-to-have-it feeling. They were the quintessential fall-to-winter boot, blessed with a soft black leather body and a red 3.5-inch tortoiseshell heel. The only problem? This time they weren’t behind a pane of glass or an open tab on my browser; they were on my colleague’s feet. Normally, I have no shame: If I see something that I like on someone else, I buy it. The Great Depression and World War I. The Wall Street Crash of 1929 kicked off the Great Depression, from which the general public escaped through Hollywood. 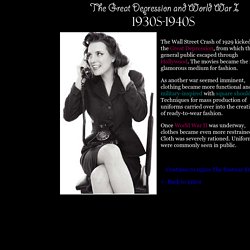 The movies became the new glamorous medium for fashion. As another war seemed imminent, clothing became more functional and military-inspired with square shoulders. Techniques for mass production of uniforms carried over into the creation of ready-to-wear fashion. Once World War II was underway, clothes became even more restrained.

Cloth was severely rationed. For The Love of Avant-Garde Fashion. I don’t remember the last time I wrote about a trend analysis on this blog, partly because I don’t have the time to follow each micro trend, and mostly because everyone else does a much better job at it. 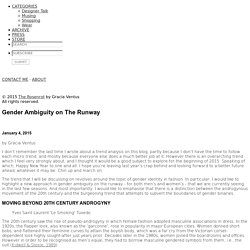 However there is an overarching trend which I feel very strongly about, and I thought it would be a good subject to explore for the beginning of 2015. Speaking of which, Happy New Year to one and all. I hope you’re leaving last year’s crap behind and looking forward to a better future ahead, whatever it may be. UK Social Media Statistics for 2015. TWIGGY - THE OFFICIAL SITE. Back in 1966, Lesley Hornby was about to change her name and experience her first taste of fame which all began on a January afternoon and a trip to Leonard's hair salon in Mayfair.... 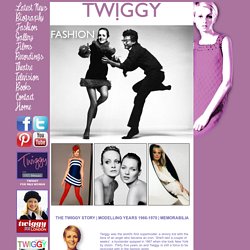 "I was in the salon for about seven hours and they were cutting and colouring it, it was all extremely exciting for me. He was brilliant, I went from this mouse like brown to the colour which I have kept now. " Following the hair cut, Twiggy tells of the photo shoot that was to follow. "Well after the hair cut I got on the bus to Barry's (Lategan) and met this really sweet lovely man who was to take my photos, I mean I'd never been in front of a camera before! " Should we stop calling women plus sized? Women are weighing up the pros and cons of 'plus size' clothing. 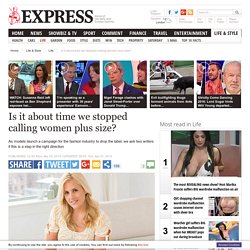 Debenhams' size 16 mannequins are great. Now we need even more diversity. The average woman in the UK is 5ft 3in tall, weighs 11 stone (70.2kg) and wears a size 16. So the first thing to say about the mannequins launched today in department store Debenhams is that they are not "plus" size, they are bang on average. So ingrained is the idea that the typical British woman must need to shop at a specialist retailer for chubsters that even the BBC suggests that size 16 is "plus size". With us all being constantly bombarded by images of tall, slender women from billboards, television screens and magazines, is it any wonder that the nation's biggest broadcaster thinks normality is represented by women so skinny that there's a gap between their thighs? Clothing sales drive online shopping growth, says ONS. Clothes have been the most popular items bought on the internet this year, according to official figures.

Some 74% of adults had bought goods or services online this year, according to a snapshot of the way the internet is used in our daily lives. Almost half had bought clothing, with 64% of 25 to 34-year-olds buying clothes online, the Office for National Statistics (ONS) said. Internet activity has risen significantly in recent years. The ONS said that 38 million, or 76%, of British adults accessed the internet every day. This total had risen by 21 million since 2006. Internet shopping had grown in popularity, rising from 53% of adults buying goods and services online in 2008 to 74% now, it added. Younger age groups have been regular users of online shopping, notably on smartphones, with nine out of 10 people aged 25 to 34 having shopped online.

Some 40% of those aged 65 and over bought online in 2014. Womenswear - UK - Consumer market research report - company profiles - market trends - 2014. London Fashion Week: Fashion industry worth £26 billion to UK economy. New figures published by the British Fashion Council on the first day of London Fashion Week value the fashion industry's contribution to the UK economy at £26 billion BY Ellie Pithers | 14 February 2014 A model appears on the catwalk during the London College of Fashion MA Show at the Waldorf Astoria Hotel, Aldwych Photo: PA The British fashion industry is worth £26 billion to the country's economy, according to figures published today by the British Fashion Council.

Fashion research and publications. High-end & Designer manufacturing report This report, published by the British Fashion Council, contends that supporting high-end manfuacturing is essential to the high end designer fashion sector in the UK. It identifies 137 UK businesses involved in the manufacture of high-end clothing, footwear and accessories with a combined turnover of £1.76bn a year. It includes recommendations to improve education and communication initiatives about manufacturing, and provide targeted support and research on overseas opportunities for manufacturers. Published: March 2015. Download report. British Fashion Council. At a press conference to open London Fashion Week Natalie Massenet, Chairman of the British Fashion Council, announced updated figures showing substantial growth in the UK fashion industry over the past five years.

The direct value of the UK fashion industry to the UK economy is £26 billion; up from £21 billion in 2009. Showing an increase of 22% in nominal terms (source: Oxford Economics 2014) The UK fashion industry is estimated to support 797,000 jobs (source: Oxford Economics 2014). This is a decrease of 2.3% from 2009 Whilst employment figures have dropped overall the increased contribution to UK GVA reflects higher productivity within the fashion sector. The British Fashion Council is committed to supporting growth in the sector which it hopes will lead to more employment opportunities Fashion’s total contribution to the economy via both indirect support for supply chain industries and induced spending of employee’s wage income is estimated to have risen to over £46 billion. Plus size fashion. British Fashion Council. Are Plus-Size Women the Problem With Plus-Size Fashion? SurveyMonkey - Connexion.

Plus-Size Women's Clothing Stores in the UK Market Research. Industry Analysis & Industry Trends The Plus-Size Women's Clothing Stores industry has been rapidly expanding over the past five years. This Is How Many Plus-Size Models Appear In September Issue Fashion Editorials. Agency signs up the first size-24 model: ‘I was never tempted to lose weight’ Statistics - WOMEN IN ADVERTISEMENTS AND BODY IMAGE.