Cellphone use in schools

CELUSE-excerpt. Smartphones: From Toy to Tool. In classrooms, smartphones are slowly shifting out of the toy-and-liability-to-attention category, and into the tool-and-engaging-students category. 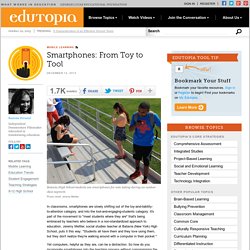 It's part of the movement to "meet students where they are" that's being embraced by teachers who believe in a non-standardized approach to education. Jeremy Mettler, social studies teacher at Batavia (New York) High School, puts it this way: "Students all have them and they love using them, but they don't realize they're walking around with a computer in their pocket. " Yet computers, helpful as they are, can be a distraction. So how do you incorporate smartphones into the teaching process without compromising the learning process? I talked to a number of teachers around the country to see how they're addressing this challenge. A Powerful Participation Tool Mettler finds smartphones helpful to encourage participation in class. Example. Cellphones in the Classroom: Distraction or Tool?

The final version of the National Education Technology Plan (NETP) was released last week, setting forth the Obama Administration's plan for improving access to and integration of technologies for teaching and learning. 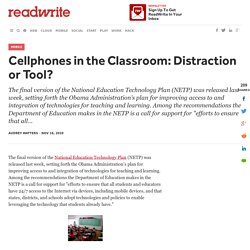 Among the recommendations the Department of Education makes in the NETP is a call for support for "efforts to ensure that all students and educators have 24/7 access to the Internet via devices, including mobile devices, and that states, districts, and schools adopt technologies and policies to enable leveraging the technology that students already have. " The push for "24/7 access to the Internet" falls under another the auspices of yet another endeavor, the National Broadband Plan. But the call for better access to Internet-ready devices, particularly utilizing tools the students already possess is an interesting one. Using Smartphones in the Classroom. By Edward Graham Found in: Advice and Support Ken Halla knows a thing or two about using technology in the classroom. 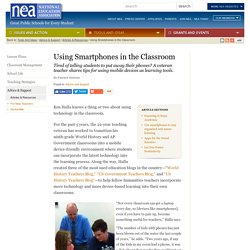 For the past 5 years, the 22-year teaching veteran has worked to transition his ninth-grade World History and AP Government classrooms into a mobile device-friendly environment where students can incorporate the latest technology into the learning process. Along the way, Halla created three of the most used education blogs in the country—“World History Teachers Blog,” “US Government Teachers Blog,” and “US History Teachers Blog”—to help fellow humanities teachers incorporate more technology and more device-based learning into their own classrooms. “Not every classroom can get a laptop every day, so [devices like smartphones], even if you have to pair up, become something useful for teachers,” Halla says. “The number of kids with phones has just been blown out of the water the last couple of years,” he adds. Ensuring it stays academic.

Do Cell Phones Belong in the Classroom? Mobile devices are ubiquitous in American high schools, and their use is harder to regulate than old-fashioned note passing. 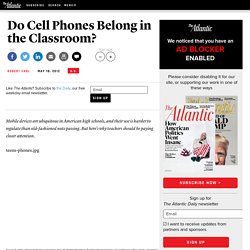 But here's why teachers should be paying closer attention. Two U.S. high school students compete in the LG Mobile Worldcup Texting Championship. According to a Pew study, American teenage girls send an average of 100 messages a day. (Reuters) If you were to drop in on most any American high school these days, what would you see? Most schools allow students to have cell phones for safety -- a reaction to the Littleton, Colorado, high school shooting incident of 1999. At a time when middle-class homes are filled with computers and mobile devices, schools are grappling with the question of how much technology to bring into the classroom.

But whatever a school's approach to technology, cell phones seem to be nearly ubiquitous. In some cases, schools have actually embraced cell phones and incorporated them into their teaching. Lift the Cell Phone Ban. Cell phones could become the next big learning tool in the classroom. 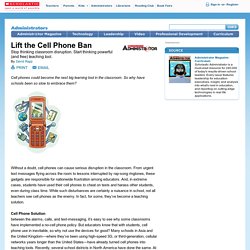 So why have schools been so slow to embrace them? Without a doubt, cell phones can cause serious disruption in the classroom. From urgent text messages flying across the room to lessons interrupted by rap-song ringtones, these gadgets are responsible for nationwide frustration among educators. And, in extreme cases, students have used their cell phones to cheat on tests and harass other students, even during class time.

While such disturbances are certainly a nuisance in school, not all teachers see cell phones as the enemy. Cell Phone Solution between the alarms, calls, and text-messaging, it’s easy to see why some classrooms have implemented a no-cell phone policy. Craik’s program started with a discussion in the staff room between the school’s principal, Gord Taylor, and teacher Carla Dolman. Principal Taylor agrees. Taylor’s colleagues have been more enthusiastic.