What Went Wrong With SoCal Gas and the Porter Ranch Gas Leak Disaster? Before she retired in 2014, Anneliese Anderle was a field engineer for the Division of Oil, Gas and Geothermic Resources, which regulates oil drilling. 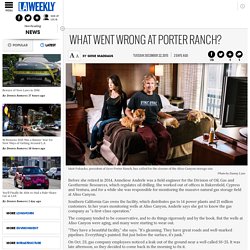 She worked out of offices in Bakersfield, Cypress and Ventura, and for a while she was responsible for monitoring the massive natural gas storage field at Aliso Canyon. Southern California Gas owns the facility, which distributes gas to 14 power plants and 21 million customers. In her years monitoring wells at Aliso Canyon, Anderle says she got to know the gas company as "a first-class operation. " The company tended to be conservative, and to do things rigorously and by the book. But the wells at Aliso Canyon were aging, and many were starting to wear out. 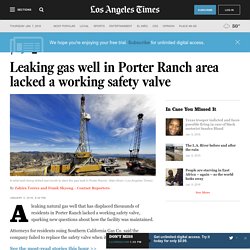 Attorneys for residents suing Southern California Gas Co. said the company failed to replace the safety valve when it was removed in 1979. See the most-read stories this hour >> The safety valve may not have prevented the leak, but it would have stopped the continued release of fumes pouring into the community, attorney Brian Panish said in an interview Sunday. Crews Try Again To Plug Uncontained Gas Leak In Porter Ranch. LOS ANGELES (CBSLA.com/AP) — Crews on Saturday were trying to stop a leak from a massive natural gas storage well that has persisted for three weeks outside Los Angeles and alarmed nearby residents concerned for their safety and sickened by the stench. 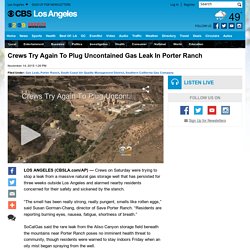 “The smell has been really strong, really pungent, smells like rotten eggs,” said Susan Gorman-Chang, director of Save Porter Ranch. “Residents are reporting burning eyes, nausea, fatigue, shortness of breath.” SoCalGas said the rare leak from the Aliso Canyon storage field beneath the mountains near Porter Ranch poses no imminent health threat to community, though residents were warned to stay indoors Friday when an oily mist began spraying from the well.

An automated call telling them to hunker down only added to frustration they have felt since the company’s initial denials of the Oct. 23 leak, a lack of a timetable for when it will be plugged and headaches and nausea some are experiencing. Video shows toxic gas plume releasing in Porter Ranch, experts say. It's invisible to the naked eye, but experts say video shot with an infrared camera on Tuesday shows a toxic gas plume releasing from the side of a mountain in Porter Ranch. 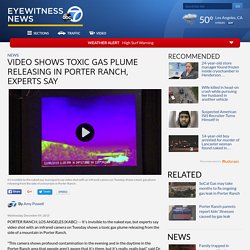 "This camera shows profound contamination in the evening and in the daytime in the Porter Ranch area that people aren't aware that it's there, but it's really, really bad," said Dr. Paul Rosenfeld, an environmental scientist. A single gas well leak is California's biggest contributor to climate change. The single biggest contributor to climate change in California is a blown-out natural gas well more than 8,700ft underground, state authorities and campaign groups said Monday. 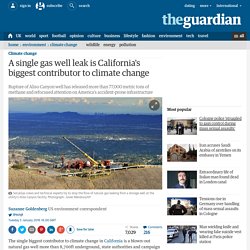 The broken well at the Aliso Canyon natural gas storage site has released more than 77,000 metric tons of the powerful climate pollutant methane since the rupture was first detected on 23 October, according to a counter created by the Environmental Defense Fund. Methane is a fast-acting climate pollutant – more than 80 times more powerful than carbon dioxide over a 20-year time frame. A California Gas Leak Is the Biggest Environmental Disaster Since the BP Oil Spill. SoCalGas knew of corrosion at Porter Ranch gas facility, doc shows.

Southern California Gas Co. knew its pipes were corroding and failing at a worsening pace more than a year before the massive Porter Ranch methane leak, a document shows. 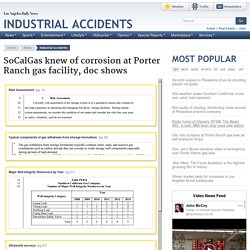 In a November 2014 state regulatory filing, the utility said it needed funds to inspect and repair old wells on a more systematic basis and warned of heightened risks under its current inspection regime. “Without a new inspection plan,” SoCalGas Director of Storage Operations Phillip Baker wrote, “SoCalGas and customers could experience major failures and service interruptions from potential hazards that currently remain undetected.”

In written testimony to the California Public Utilities Commission, Baker described a reactive maintenance process that hinted at major leakage problems underground. Baker argued the company needed to invest in inspection, maintenance and repairs. State regulators must approve any rate increases to pay for the investments. Advertisement. SoCal Gas Ordered to Relocate Residents Due to Gas Leak in Porter Ranch. Many homeowners in the fast growing community of Porter Ranch worry their health and property values might be affected by odors coming from the Aliso Canyon well uphill. 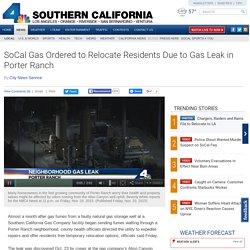 The leak was discovered Oct. 23 by crews at the gas company's Aliso Canyon storage facility near Northridge and was reported to the county five days later. Since then, some residents have complained of an intermittent rotten-egg smell and reported symptoms such as nosebleeds, headaches, nausea and other issues, according to county health officials. Residents Want Action on Gas Leak. SoCalGas expanding resource center dealing with Porter Ranch gas leak. PORTER RANCH >> Southern California Gas Co. announced an expansion Monday of a resource center it established for people affected by a continuing natural gas leak in the Porter Ranch area. 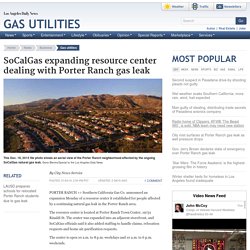 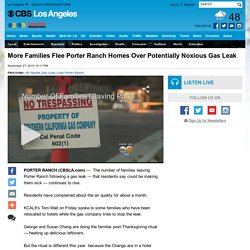 Residents have complained about the air quality for about a month. KCAL9’s Tom Wait on Friday spoke to some families who have been relocated to hotels while the gas company tries to stop the leak. George and Susan Chang are doing the familiar post-Thanksgiving ritual — heating up delicious leftovers. Porter Ranch Residents Face Christmas Away From Home. As a nearby gas leak goes into its third month, Porter Ranch residents are faced with an uncertain holiday. 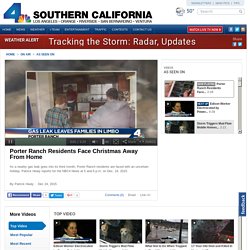 Patrick Healy reports for the NBC4 News at 5 and 6 p.m. on Dec. 24, 2015. By Patrick Healy. LAUSD prepares schools for relocated Porter Ranch students due to gas leak. Nearly 2,000 students will return from winter break next week to a different school from the one at which they started the school year, but school district officials are attempting to make the new environments resemble the old ones. The Los Angeles Unified School District Board of Education decided on Dec. 17 that students from two schools in Porter Ranch would be relocated to two new sites amid growing concerns about a leaking gas well at the nearby Aliso Canyon storage facility in the Santa Susana Mountains above Porter Ranch. District officials said the gas leak disrupted student learning because of an increasing number of student and teacher absences caused by the health effects of the gas leak. Since the board’s vote, crews have been working days, nights and weekends, only taking Christmas Day off, to transform two school sites about 8 miles away into satellite campuses for the two Porter Ranch schools.

No-fly zone over California gas leak. Erin Brockovich meets with residents about Porter Ranch gas leak. Environmental activist Erin Brockovich addressed more than 2,000 residents concerned about the natural gas leak in Porter Ranch. Brockovich is working with attorneys from the law firm that represented victims of the BP oil spill. They gave some legal advice: Keep a journal of what you smell. If you feel sick, jot down the symptoms. Keep medical and vet bills, and don't sign anything without talking to an attorney. "This is going on day after day after day, seven days a week, 24 hours a day," Brockovich said. Porter Ranch leak: Why were homes built so close to a gas well? To the editor: It absolutely is beyond my comprehension why the “planned community” of Porter Ranch was ever built. ("Why the Porter Ranch gas leak could take months to fix," Jan. 2) The developers and agencies that designed and approved this project clearly knew one of the largest natural gas storage facilities in the country was located near that area.

After all, it had previously blown its lid and yet developers were allowed to build homes in close proximity to the facility. Now everybody is very upset with the Southern California Gas Co., whose facility was there before a single development was built. That facility should have had a no-build zone with a radius of five miles for as long as it was operational and until it was emptied of its fuel. Mike Morris, Chatsworth. Governor Declares Emergency Over Los Angeles Gas Leak. Photo LOS ANGELES — Natural gas has been spewing into the air in the Porter Ranch neighborhood here since late October, sickening residents, prompting thousands to evacuate their homes and pouring greenhouse gas into the atmosphere. Gov. , faced with mounting public anger and no end in sight to the leak, declared a state of emergency on Wednesday for the neighborhood of about 30,000 at the edge of the San Fernando Valley.

And residents — who have been demanding to know why the Southern California Gas Company cannot fix the leak to its storage well, and whether the company will compensate them for their lost property values and health problems — want to know why it has taken so long. “This is the equivalent of the BP oil spill, except it’s on land, in a populated community,” said Mitchell Englander, the Los Angeles city councilman who represents Porter Ranch. “This is one of the most disruptive, catastrophic environmental events that I’ve seen. In declaring the state of emergency, Mr. Fixing the Porter Ranch gas leak. Huge Natural Gas Leak In Porter Ranch Still Months From Fix.