Why Is Google Buying So Many Robot Startups? Via MIT technology Review Forget robotic product delivery. 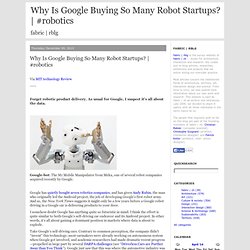 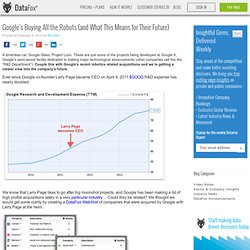 These are just some of the projects being developed at Google X, Google’s semi-secret facility dedicated to making major technological advancements (other companies call this the “R&D Department”). Couple this with Google’s recent robotics related acquisitions and we’re getting a clearer view into the company’s future. Google buys Boston Dynamics, maker of spectacular and terrifying robots. Google has acquired robotics engineering company Boston Dynamics, best known for its line of quadrupeds with funny gaits and often mind-blowing capabilities. 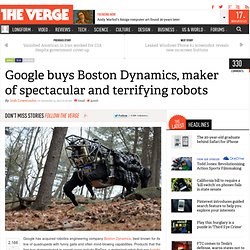 Products that the firm has demonstrated in recent years include BigDog, a motorized robot that can handle ice and snow, the 29 mile-per-hour Cheetah, and an eerily convincing humanoid known as PETMAN. News of the deal was reported on Friday by The New York Times, which says that the Massachusetts-based company's role in future Google projects is currently unclear. Makers of the BigDog robot Specific details about the price and terms of the deal are currently unknown, though Google told the NYT that existing contracts — including a $10.8 million contract inked earlier this year with the US Defense Advanced Research Projects Agency (DARPA) — would be honored. Despite the DARPA deal, Google says it doesn't plan to become a military contractor "on its own," according to the Times. The future is looking awesome! Boston Dynamics Big Dog (new video March 2008)

Google purchases Nest for $3.2 billion. Google has just purchased Nest Labs, the maker of the Nest Learning Thermostat and Protect smoke detector, for $3.2 billion in cash. 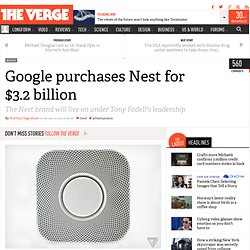 According to a Google press release, Nest will continue to operate independently, co-founder and CEO Tony Fadell tells us; co-founder Matt Rogers will also make the move to Google. While the transaction is subject to the usual regulatory review, Google says it expects the sale to close within the next few months. Google Ventures had already invested tens of millions of dollars in Nest, so the company has been on Mountain View's radar for some time now. It's not yet clear exactly how Google plans to use Nest, but the company obviously sees it as an important part of its future.

Google to acquire connected home device maker Nest for $3.2B. Google announced on Monday that it’s in the process of acquiring Nest Labs, a home-automation company known for its digital thermostats and smoke alarms. 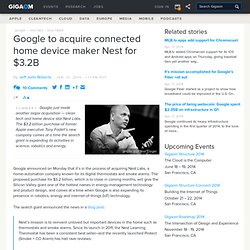 The proposed purchase for $3.2 billion, which is to close in coming months, will give the Silicon Valley giant one of the hottest names in energy-management technology and product design, and comes at a time when Google is also expanding its presence in robotics, energy and internet-of-things (IoT) technology. The search giant announced the news in a blog post: Nest’s mission is to reinvent unloved but important devices in the home such as thermostats and smoke alarms.

The release added that Nest would retain its own brand identify, and that it would continue to operate under the leadership of Nest CEO Tony Fadell (you can see a video of Fadell speaking at Gigaom’s recent Roadmap conference below). “Our privacy policy clearly limits the use of customer information to providing and improving Nest’s products and services. Smarter machine learning, for everyone. Just a couple of years ago, you couldn’t talk to the Google app through the noise of a city sidewalk, or read a sign in Russian using Google Translate, or instantly find pictures of your Labradoodle in Google Photos. 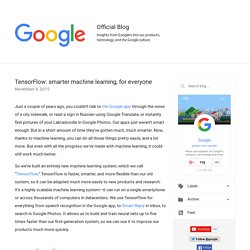 Our apps just weren’t smart enough. But in a short amount of time they've gotten much, much smarter. Now, thanks to machine learning, you can do all those things pretty easily, and a lot more. But even with all the progress we've made with machine learning, it could still work much better. So we’ve built an entirely new machine learning system, which we call “TensorFlow.” Author Full Name Author Title Author Team. Laurent Alexandre : "La stratégie secrète de Google apparaît…". Paru dans leJDD Selon Laurent Alexandre, Google est le premier embryon d'intelligence artificielle au monde. 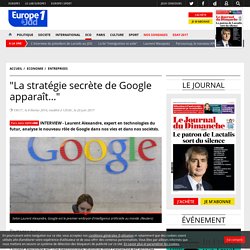 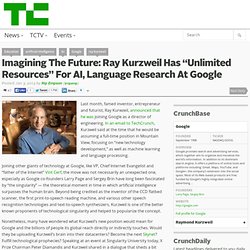 In an email to TechCrunch, Kurzweil said at the time that he would be assuming a full-time position in Mountain View, focusing on “new technology development,” as well as machine learning and language processing. Joining other giants of technology at Google, like VP, Chief Internet Evangelist and “father of the Internet” Vint Cerf, the move was not necessarily an unexpected one, especially as Google co-founders Larry Page and Sergey Brin have long been fascinated by “the singularity” — the theoretical moment in time in which artificial intelligence surpasses the human brain. 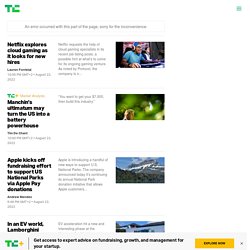 The Information reports that the acquisition price was more than $500 million, and that Facebook was also in talks to buy the startup late last year. DeepMind confirmed the acquisition to us, but couldn’t disclose deal terms. The acquisition was originally confirmed by Google to Re/code. Google’s hiring of DeepMind will help it compete against other major tech companies as they all try to gain business advantages by focusing on deep learning. 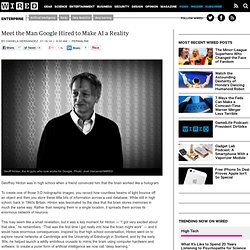 Photo: Josh Valcarcel/WIRED Geoffrey Hinton was in high school when a friend convinced him that the brain worked like a hologram. To create one of those 3-D holographic images, you record how countless beams of light bounce off an object and then you store these little bits of information across a vast database. While still in high school, back in 1960s Britain, Hinton was fascinated by the idea that the brain stores memories in much the same way. Rather than keeping them in a single location, it spreads them across its enormous network of neurons.

This may seem like a small revelation, but it was a key moment for Hinton — “I got very excited about that idea,” he remembers. ‘I get very excited when we discover a way of making neural networks better — and when that’s closely related to how the brain works.’