Banksy Is a Control Freak. But He Can’t Control His Legacy. These strategies of remote control also extend to Banksy’s dealings with the news media, whose publicity oxygenates his fame and mystique, but whose enquiries can be an irritant. 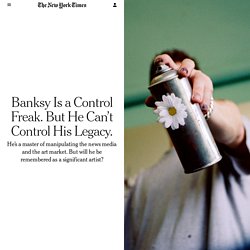 The artist does not communicate directly with journalists, but only through a single press spokeswoman, Joanna Brooks, who declined to answer questions for this article. Ms. Brooks said that Banksy would respond if publication were delayed until March, when the artist would make a significant announcement. Posts on Banksy’s Instagram account (7.1 million followers) are all the more impactful for being so occasional. A new painting is suddenly announced — like the Yuletide reindeer stenciled on a wall next to a homeless person in Birmingham, England, posted on Dec. 9 — and worldwide media coverage from the BBC, The Guardian, Reuters and other outlets duly follows, which is shared and commented on via social media. What Banksy does is more like an advertising campaign than art, Mr. Banksy outed by researchers who used serial killer tracking.

Banksy is one of the world’s most famous artists, but amazingly, he’s been able to keep his real identity something of a mystery. 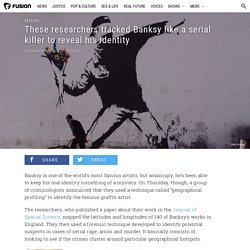 On Thursday, though, a group of criminologists announced that they used a technique called “geographical profiling” to identify the famous graffiti artist. The researchers, who published a paper about their work in the Journal of Spacial Science, mapped the latitudes and longitudes of 140 of Banksy’s works in England. They then used a forensic technique developed to identify potential suspects in cases of serial rape, arson and murder. It basically consists of looking to see if the crimes cluster around particular geographical hotspots.

The researchers' statistical models The researchers employed a cheat though. Lo and behold, the addresses matched the researchers’ hotspots. According to the BBC, Banksy’s lawyers contacted the journal about the paper, and delayed its release as they weren’t happy about the way a press release was worded. An Error Occurred Setting Your User Cookie. Banksy the graffiti artist unmasked as a former public schoolboy from suburbia. By Claudia Joseph for MailOnline Created: 13:38 GMT, 12 July 2008 He is perhaps the most famous, or infamous, artist alive. 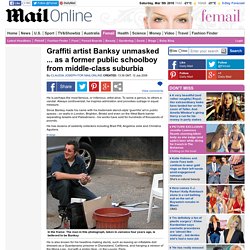 Disputed Banksy Mural Sells for More Than $1.1 Million. A mural by Banksy which divided the art world after being removed from a London street sold last night at a private event in London for more than 750,000 pounds ($1.1 million), according to the event organizers. 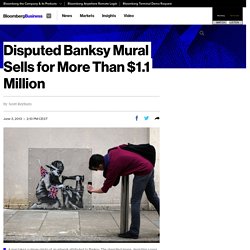 The 2012 spray painting “Slave Labour,” showing a boy making Union Jack bunting with a sewing machine, was being shown by the Sincura Group, a concierge company, at a members-only event in the basement of the London Film Museum in the Covent Garden area of the U.K. capital. The work’s sale, earlier planned for an auction in Florida, enraged street art enthusiasts who argue that Banksy murals are gifts to communities and should remain in situ. Others point out that unsolicited graffiti becomes the property of the building owners, who are legally entitled to do what they want with them.

Prospective buyers had been invited to make offers for the painting of more than 900,000 pounds in a 3½-hour silent auction that closed at 9:30 p.m. Kate Moss’s Soft Spot For Banksy. New-banksy-monopoly-sculpture-for-occupy-london from mymodernmet.com. Though we hadn't heard from elusive street artist Banksy in a little while, it should come as no surprise that his latest piece would be for the "Occupy" movement.

Popping up at St. 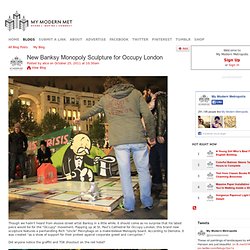 Paul’s Cathedral for Occupy London, this brand new sculpture features a panhandling Rich “Uncle” Pennybags on a make-believe Monopoly board. According to Demotix, it was created "as a show of support for their protest against corporate greed and corruption. " Did anyone notice the graffiti and TOX shoutout on the red hotel? Banksy 2003 Mural "Every Picture Tells A Lie" Revealed by Brad Downey Your Ultimate Street Art News Site. Back in 2003, Banksy created this piece on a wall in Kreuzberg Berlin for a festival, this piece was buffed after the event and completely disappeared with no pictures to document it.Brad Downey was amongst the participant in 2003 and 8 years later he brought back the piece to life for a new shows at the Bethanien Arts Centre.

According to Nuart, "Every Picture Tells A Lie" was renamed by Brad Downey to "What Lies Beneath". Une oeuvre de Banksy refait surface à Berlin. 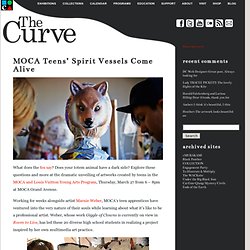 SELENE PRECIADO Jacob, can you please talk about the role that architecture played in each interpretation of Gas Giant and how it has tested “the limits of language, to reinterpret the space of the piece” especially in the case of the third and final presentation at MOCA Pacific Design Center? JACOB HASHIMOTO The MOCA Pacific Design Center is a very peculiar building. LA community group calls for thieves to return work done by Banksy during Oscars. By Amy Oliver Updated: 02:48 GMT, 23 March 2011 An original painting by elusive street artist Banksy is a serious investment.

'Give us back our Banksys:' Community group in LA calls for thieves to return work done by the elusive artist during Oscars – agnesdelmotte

So serious some are using drastic - and even illegal - measures to obtain one. 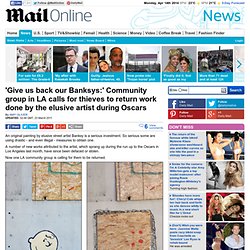 A number of new works attributed to the artist, which sprang up during the run up to the Oscars in Los Angeles last month, have since been defaced or stolen. Now one LA community group is calling for them to be returned. Now you see it...

New Banksy in London? A new Shop til you drop Black Friday stencil has appeared on a wall in Mayfair, Central London. The stencil is created in the style of Bansky, but it has not yet been confirmed that this is an actual Bansky piece. – agnesdelmotte 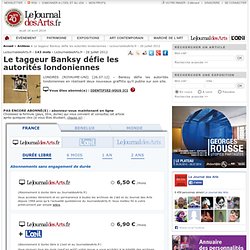