Swelling Ethiopian Migration Casts Doubt on its Economic Miracle. What did Libyans gain from the revolution? A child from the town of Tawargha runs in the rain in a refugee camp in Benghazi, Jan. 11, 2012. 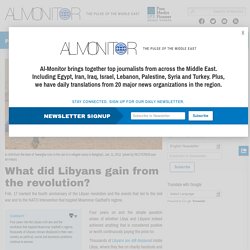 (photo by REUTERS/Esam Al-Fetori) Author: Mustafa Fetouri Posted February 24, 2015 Feb. 17 marked the fourth anniversary of the Libyan revolution and the events that led to the civil war and to the NATO intervention that toppled Moammar Gadhafi’s regime. Summary⎙ Print Four years into the Libyan civil war and the revolution that toppled Moammar Gadhafi’s regime, thousands of Libyans remain displaced in their own country as political, social and economic problems continue to worsen. Four years on and the simple question arises of whether Libya and Libyans indeed achieved anything that is considered positive or worth continuously paying the price for. Libya: U.S. General Rodriguez Claims 'Islamic State' Runs Training Camps in Libya.

A US general has claimed Islamic State militants have set up training camps in eastern Libya. 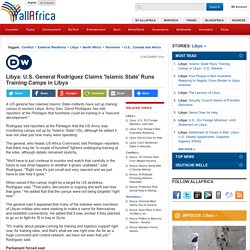 Army Gen. David Rodriguez has told reporters at the Pentagon that hundreds could be training in a "nascent development. " Rodriguez told reporters at the Pentagon that the US Army was monitoring camps set up by "Islamic State" (IS), although he added it was not clear just how many were operating. The general, who heads US Africa Command, told Pentagon reporters that there may be "a couple of hundred" fighters undergoing training at the sites, although details remained sketchy. "We'll have to just continue to monitor and watch that carefully in the future to see what happens or whether it grows unabated," said Rodriguez. When asked if the camps might be a target for US airstrikes, Rodriguez said, "That policy discussion is ongoing and we'll see how that goes. " "It's mainly about people coming for training and logistics support right now, for training sites, and that's what we see right now.

Libyan tribal leaders gather in Cairo for unity talks. The Cairo Centre for Conflict Resolution and Peace Building in Africa has hosted Libyan tribal elders and leaders in Cairo as an opportunity to “reunite and overcome the current crisis”. 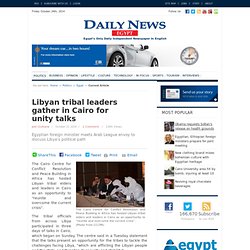 (Photo from CCCPA) Can Libya Stay Together? Since the overthrow of Gaddhafi, the capital has long been consumed by fierce struggles between Islamists and the coalition aligned with former prime minister Ali Zeidan, largely perceived as Western proxies—each with their own parliamentary blocs and militias. 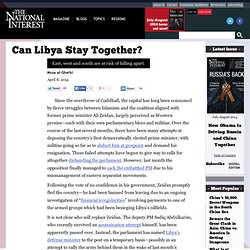 Over the course of the last several months, there have been many attempts at deposing the country’s first democratically elected prime minister, with militias going so far as to abduct him at gunpoint and demand his resignation. These failed attempts have begun to give way to calls for altogether disbanding the parliament.

However, last month the opposition finally managed to sack the embattled PM due to his mismanagement of eastern separatist movements. Following the vote of no confidence in his government, Zeidan promptly fled the country—he had been banned from leaving due to an ongoing investigation of “financial irregularities” involving payments to one of the armed groups which had been besieging Libya’s oilfields. Libya interim leader to form new cabinet: MP - Region - World. Libya interim leader to form new cabinet: MP AFP , Tuesday 8 Apr 2014 Libya's parliament on Tuesday charged the interim prime minister with forming a new cabinet after the weak central government had earlier requested wider powers. 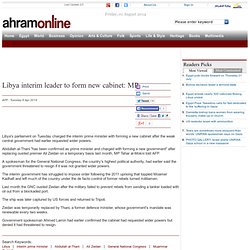 Abdullah al-Thani "has been confirmed as prime minister and charged with forming a new government" after replacing ousted premier Ali Zeidan on a temporary basis last month, MP Tahar al-Mokni told AFP. A spokesman for the General National Congress, the country's highest political authority, had earlier said the government threatened to resign if it was not granted wider powers.

Armed-group-kidnaps-70-Egyptians-in-Libya. Qaddafi was killed by French agent, not rebel: report. A new report has begun to spread its wings with claims that a French secret serviceman, acting on the express orders of Nicolas Sarkozy, was responsible for the killing of former Libyan dictator Colonel Qaddafi. Qaddafi was killed on Oct. 20, 2011 in an assault on his hometown of Sirte after he was cornered in a sewage pipe waving a golden gun.

Italian newspaper Corriere della Serra, has reported, citing diplomatic sources in the Libya capital Tripoli, that a foreign assassin killed Qaddafi, and that the assassin was likely to have been French. According to well-placed sources in Libya, a Frenchman infiltrated a violent mob which was mutilating the captured Qaddafi last year and proceeded to shoot him in the head. In a sinister twist, a 22-year-old young man who was among those who ambushed Qaddafi and who frequently brandished the former strongman’s golden gun died in Paris last Monday. The alleged incident, if true, would cause a stir inside and outside France. U.N. panel documents military shopping list that helped topple Qaddafi.

As the late Col. 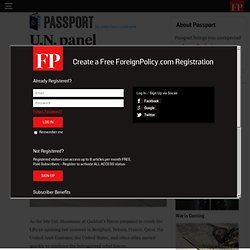 Muammar al-Qaddafi's forces prepared to crush the Libyan uprising last summer in Benghazi, Britain, France, Qatar, the United Arab Emirates, the United States, and other allies moved quickly to reinforce the beleaguered rebel forces. With military supplies, training, advice -- and of course the backing of NATO war planes -- this coalition of governments provided critical support to change the course of the conflict, ultimately leading to Qaddafi's downfall. The U.N.