HE & the reputation game

ERC rejects 'impact agenda' The adoption of an impact agenda by the European Research Council would destroy the organisation and will never be countenanced, its president has pledged. 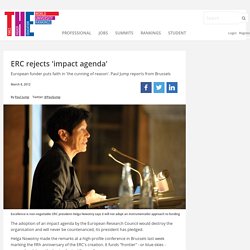 Helga Nowotny made the remarks at a high-profile conference in Brussels last week marking the fifth anniversary of the ERC's creation. It funds "frontier" - or blue-skies - research solely on the basis of scientific excellence. Just over 20 per cent of its grants between 2007 and 2011 went to researchers at UK universities. Professor Nowotny, emeritus professor of the social studies of science at ETH Zürich-Swiss Federal Institute of Technology Zürich, admitted that this approach created an "inherent tension" with "the demands of policymakers for practical innovation, seen as the undisputed motor of...economic growth". Such tensions, she added, were heightened in tough economic times. "One answer is to target resources...to look to strategic sectors, to put science to work on the most pressing problems.

NSS results unrelated to teaching quality, study claims. Student satisfaction scores should not be used to measure teaching quality because they have no discernible link with exam performance, a leading University of Oxford academic has claimed. 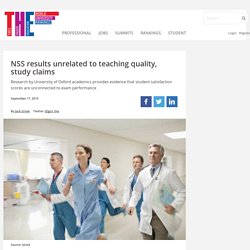 While results from the National Student Survey are likely to be used as a key indicator in the government’s proposed teaching excellence framework, a study by Tim Lancaster, director of clinical studies at Oxford, concludes that they have “little or no value as a quality metric” . Dr Lancaster compared the NSS results of 28 UK medical schools with the average pass rates achieved by their students in exams sat by all trainee doctors two years after graduation. There was no correlation between good results in the NSS and performance in the exams set by the General Medical Council, according to the study “Assessing the quality of UK medical schools: what is the validity of student satisfaction ratings as an outcome measure?”

Research Professional Sign-in. Is employability data being manipulated? The Destinations of Leavers from Higher Education survey is being abused, according to one former university employee When I started the post, it was said that the DLHE would make me hard of hearing. 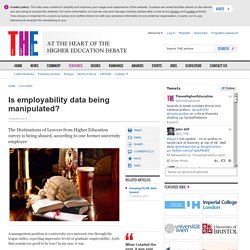 In no time at all, they laughed, I’d be hearing ‘barrister’ not ‘barista’ A management position at a university on a meteoric rise through the league tables, reporting impressive levels of graduate employability. Agents paid an average of £1,767 per non-EU recruit. THE investigation shows spike in spending on fees as UK ‘reliant’ on middlemen Source: REX Guiding hand: one pro vice-chancellor suggested changes to the visa system had pushed more students to seek agents’ advice UK universities’ commission payments to overseas recruitment agents have topped £86 million after rising sharply in recent years, a Times Higher Education investigation has found. 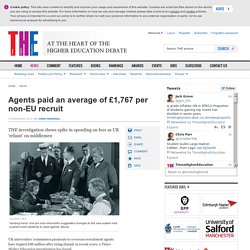 Data obtained from 158 higher education institutions under the Freedom of Information Act reveal that all but 19 elite or specialist institutions now use agents to enrol non-European Union students. Why UK universities should adopt US-style degrees. I am finishing my 20th year of teaching in the UK. 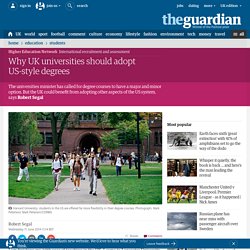 I came to Lancaster University from my native US in 1994, and in 2006 I left Lancaster for the University of Aberdeen. I was born, raised, and educated in the US. But by now I think I fathom the very different UK conventions. David Willetts, the universities minister, is encouraging UK universities to introduce the US custom of having both a major subject, which can be anything, and a minor one, which can be anything else. UC Berkeley professor critiques Saudi university's recruitment process of world's top researchers. The U.S. 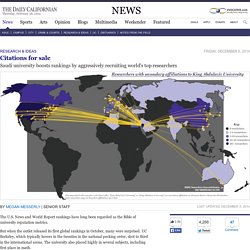 News and World Report rankings have long been regarded as the Bible of university reputation metrics. But when the outlet released its first global rankings in October, many were surprised. UC Berkeley, which typically hovers in the twenties in the national pecking order, shot to third in the international arena. The university also placed highly in several subjects, including first place in math. Even more surprising, though, was that a little-known university in Saudi Arabia, King Abdulaziz University, or KAU, ranked seventh in the world in mathematics — despite the fact that it didn’t have a doctorate program in math until two years ago. 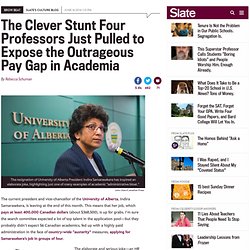 This means that her job, which pays at least 400,000 Canadian dollars (about $368,500), is up for grabs. I’m sure the search committee expected a lot of top talent in the application pool—but they probably didn’t expect 56 Canadian academics, fed up with a highly paid administration in the face of country-wide “austerity” measures, applying for Samarasekera’s job in groups of four. The elaborate and serious joke—an HR performance piece, if you will, that would also happen to have spectacular results if it actually worked—is the brainchild of Dalhousie University professor Kathleen Cawsey and three friends, a Gang of Four whose pointed (and hilarious) cover letter has become a Canadian media cause célèbre.

Economics is becoming an elite subject for elite UK universities. UK universities have had to become much more responsive to changes in the pattern of demand and compete with one another for different revenue streams. 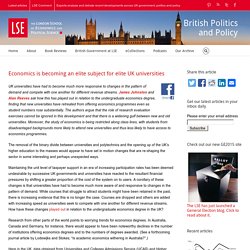 James Johnston and Alan Reeves ask how this has played out in relation to the undergraduate economics degree, finding that new universities have retreated from offering economics programmes even as student numbers rose substantially. The authors argue that the role of research evaluation exercises cannot be ignored in this development and that there is a widening gulf between new and old universities. Moreover, the study of economics is being restricted along class lines, with students from disadvantaged backgrounds more likely to attend new universities and thus less likely to have access to economics programmes.

11 new #HEwords for academics that should be in the dictionary. We asked our Twitter followers to suggest words from the world of higher education that should exist, but don’t. 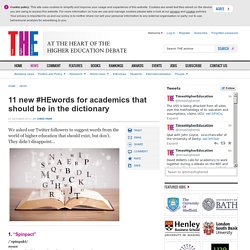 They didn’t disappoint… 1. “Spinpact” MMU’s GradMatch offers funding for graduate interns. Can I post an article about anything on Bdaily? 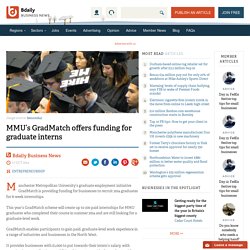 No - we only publish articles that are relevant to a business audience. We have 9 sectors which are often a good point of reference if you are unsure. Because we are a business platform, we would not publish articles that are not business relevant. For example we would remove content about music, wildlife, schools etc. unless they had a clear business angle. Finishing your PhD thesis: 15 top tips from those in the know. Many PhD students are now in the final throes of writing their thesis. Turning years of research into a single, coherent piece of work can be tough, so we asked for tips from supervisors and recent PhD graduates. We were inundated with tweets and emails – and @AcademiaObscura helpfully created a Storify of the tweets. Thomas Docherty to face insubordination charge in tribunal. September proceedings set for suspended University of Warwick academic who is accused of undermining department head Source: Alamy Piling up: charges against Docherty include ‘disrespect to job candidates’ A critic of government higher education policy suspended by the University of Warwick since January is being charged with undermining the authority of the head of his department, Times Higher Education has learned.

Among the claims that form part of the case against Thomas Docherty is that he sighed and made “ironic” comments when interviewing job candidates. Warwick has refused to comment on details of the case, except to deny that Professor Docherty’s suspension is connected with his outspoken opposition to changes to the university system. It is understood that it was Professor Bates who originally brought the complaint against Professor Docherty, himself a former head of department, but since then the case has been taken over by the university’s senior management.

Click to rate. English language tests inquiry declares thousands of results invalid. Immigration minister James Brokenshire told MPs some test centres' results are yet to be analysed. Students expect better jobs than they'll get, survey shows. Many students find themselves doing non-graduate jobs. Photograph: Alamy. Hundreds of poorer children missing out on ‘elite’ universities, says commission. Milburn blames ‘secondary school maze’ for missing 2,000 More than 2,000 children from poorer backgrounds are missing out on places at “elite” universities every year because of their socio-economic status, it has been claimed. Annually, some 2,200 fewer disadvantaged children attend top institutions than would be expected if they were to follow the same educational path as their better-off peers with similar levels of attainment at primary school, according to research published today by the Social Mobility and Child Poverty Commission. The research, conducted by the Institute for Fiscal Studies, looks at data for 520,984 children born in 1991-92, and finds that the early promise shown by the brightest poor primary school students appears to be lost during their time at secondary school.

By the age of 16, high-achieving children from the most disadvantaged families have typically been overtaken by pupils from the best-off families who were only average achievers at age 11. Click to rate. Why are male students at Oxford getting more firsts? Should academics lose out financially for taking maternity leave? For a good few years I have known that having a child as an early career academic might be risky.

Hard Evidence: why aren’t there more black British students at elite universities? Young people from black British backgrounds are more likely to go to university than their white British peers, but they are much less likely to attend the UK’s most selective universities. As the Independent Commission on Social Mobility pointed out: “There are more young men from black backgrounds in prison in the UK than there are UK-domiciled undergraduate black male students attending Russell Group institutions.” Bursaries fail to help poor students stay the course. When May I Shoot a Student? Opinion: Academic assessment gone mad.

Universities should do more to keep women in science, say MPs. White definitions of merit and admissions change when they think about Asian Americans, study finds. Study finds that Ph.D.s who write interdisciplinary dissertations earn less. Everyone, it seems, loves the idea of scholars interdisciplinary work. How to Write a Research Statement. How Academia Resembles a Drug Gang. The seven deadly sins of health and science reporting. New book on gender, family and academe shows how kids affect careers in higher education. Incentives are a powerful tool, but do universities know how to use them? Journal Impact Factors. Pregnant in the lab: how does child-bearing affect a science career? Phillip Blond needs to do his research on the impact of British academics. Show me the money: grant writing is taking over science.

Academics ‘talk posh’ to protect their careers. Vis ma vie d’enseignant chercheur en France. NHS patient records to revolutionise medical research in Britain. From Graduate School to Welfare - Graduate Students. Science and Truth - We’re All in It Together. Bref, je suis étudiante en psychologie. Doctoral degrees: The disposable academic. Higher education is burning out its employees. Great ape debate : Nature : Nature Publishing Group. France's stem-cell rules get even stricter. 'Duh science': Why scientists spend so much time proving the obvious - latimes.com. How not to get a lab job. What your approach says about you. Scientist Registration – I&#039;m a Scientist, Get me out of here! Science funding cuts &#039;could lead to brain drain&#039;