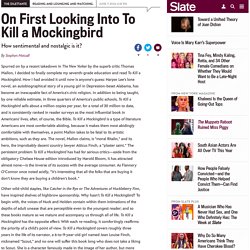 How I had avoided it until now is anyone's guess: Harper Lee's lone novel, an autobiographical story of a young girl in Depression-beset Alabama, has become an inescapable fact of America's civic religion. In addition to being taught, by one reliable estimate, in three quarters of America's public schools, To Kill a Mockingbird sells about a million copies per year, for a total of 30 million to date, and is consistently ranked in reader surveys as the most influential book in Americans' lives, after, of course, the Bible. 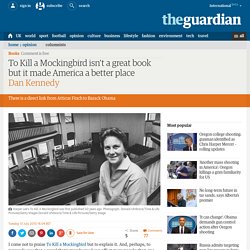 And, perhaps, to persuade you that a novel that's merely good can affect more people than one that is great. My exposure to Harper Lee's sole book, published in 1960, came late – very late. It was only this spring that I spent an evening on the couch with the 1962 movie version. My daughter and her fellow high-school students had read the book, as have millions of other American schoolchildren. I decided it was long past time to plug a rather large hole in my cultural education. I was deeply impressed, not so much by Gregory Peck's wooden performance as the lawyer Atticus Finch, as I was by Mary Badham, the young girl who played Atticus's daughter, Scout. Yet several weeks later, when I read the novel, I felt let down. I realised that Atticus came across as one-dimensional not because of Peck's limitations as an actor but because of Lee's limitations as a writer.

Harper Lee's To Kill a Mockingbird, and What It Isn't. Georgia had Flannery O'Connor and Carson McCullers; Mississippi had William Faulkner and Eudora Welty; Louisiana inspired the major works of Kate Chopin and Tennessee Williams. 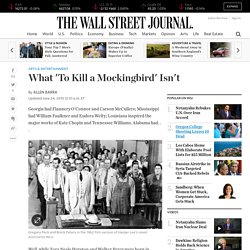 Alabama had. . . Well, while Zora Neale Hurston and Walker Percy were born in Alabama, those two great writers didn't stick around my home state for long. And as for Harper Lee—Alabama born, raised and still resident—she doesn't really measure up to the others in literary talent, but we like to pretend she does. Ms. Lee is at the head of the Southern class in one big way, however: The numbers are imprecise, but according to a 1988 report by the National Council of Teachers of English, her novel, "To Kill a Mockingbird," was required reading in three-quarters of America's high schools. Ms. Naturally, it won the Pulitzer Prize. Atticus speaks in snatches of dialogue that seem written to be quoted in high-school English papers. . • "The one thing that doesn't abide by majority rule is a person's conscience. " Mr. ‘Reading Workshop’ Approach Lets Students Pick the Books. Photo JONESBORO, Ga. — For years Lorrie McNeill loved teaching “To Kill a Mockingbird,” the Harper Lee classic that many Americans regard as a literary rite of passage. 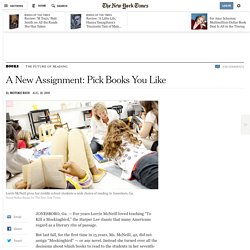 But last fall, for the first time in 15 years, Ms. McNeill, 42, did not assign “Mockingbird” — or any novel. Instead she turned over all the decisions about which books to read to the students in her seventh- and eighth-grade English classes at Jonesboro Middle School in this south Atlanta suburb. Among their choices: James Patterson‘s adrenaline-fueled “Maximum Ride” books, plenty of young-adult chick-lit novels and even the “Captain Underpants” series of comic-book-style novels. But then there were students like Jennae Arnold, a soft-spoken eighth grader who picked challenging titles like “A Lesson Before Dying” by Ernest J.

The approach Ms. In New York City many public and private elementary schools and some middle schools already employ versions of reading workshop. “What child is going to pick up ‘Moby-Dick’?” Ms. Top 100 Banned/Challenged Books: 2000-2009.