GlossyEyes Settings (Tutorial) by SloshWerks on DeviantArt. Basic3dtraining. The Biggest DAZ Studio Iray Secret To Fabulous Lighting (Yours To Copy Now) There’s a lot positive to be said about the new DAZ Studio 4.8 (Public Beta), and the new integration with Nvidia’s magnificent Iray render engine. 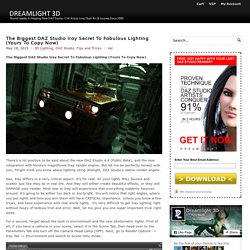 But let me be perfectly honest with you; Forget most you know about lighting using 3Delight, DAZ Studio’s native render engine. See, Iray differs in a very critical aspect. It’s for real. All your lights WILL bounce and scatter just like they do in real life. For a second, forget about the built in environment and the new photometric lights. This option will only use scene lights when you render and you don’t need to worry about anything else. Get back to Editor Sub Tab in Surfaces Tab, Set Color Temperature to 6500 K (which makes it white when White Point is set to 1,1,1 in the Environment Tab), and if needed adjust the Emission Color to suit your scene or taste. The best advice I can give you is “less is more”. Keep lighting! – Val Cameron.

Daz Studio Iray Tutorial for Beginners. I am starting to play around more seriously with the Iray renderer in Daz Studio. 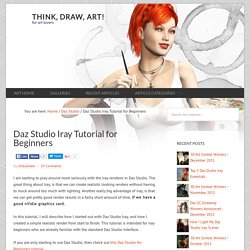 The great thing about Iray, is that we can create realistic looking renders without having to muck around too much with lighting. Another really big advantage of Iray, is that we can get pretty good render results in a fairly short amount of time, if we have a good nVidia graphics card. In this tutorial, I will describe how I started out with Daz Studio Iray, and how I created a simple realistic render from start to finish. This tutorial is intended for Iray beginners who are already familiar with the standard Daz Studio Interface. If you are only starting to use Daz Studio, then check out this Daz Studio for Beginners tutorial. First Iray image I created with an image based light (IBL). 1. I create the scene in the same way as I would in regular Daz Studio. In this tutorial, I make a very simple scene with a female figure and a dragon tattoo on her back. sIBL Archive. Installation Each thumbnail links directly to an archived sIBL-set. 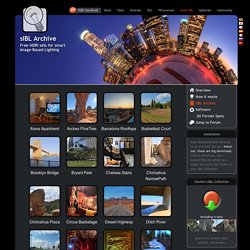 Watch out, these are big downloads. Click to download, then expand the zip achive as a folder and place the folder in your sIBL-Collection. Starter's sIBL-Collection Including 4 sets: apartment, empty room, backlot, office-eden Update Pack Already collected the sets as they came out monthly? License All sIBL-sets on this page, including the images within, are licensed under the Creative Commons Attribution-Noncommercial-Share Alike 3.0 License. Remember: Do what you want with them, but always mention where you got them from... Trying Out Nvidia's Iray Render Engine in DAZ Studio 4.8. There has been a lot of excitement about the beta release of DAZ Studio 4.8 Iradium, which features Nvidia’s Iray render engine. 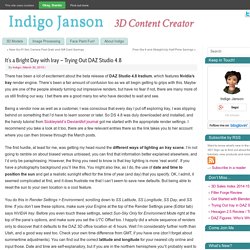 There’s been a fair amount of confusion too as we all begin getting to grips with this. Maybe you are one of the people already turning out impressive renders, but have no fear if not, there are many more of us still finding our way. I bet there are a good many too who have decided to wait and see. Being a vendor now as well as a customer, I was conscious that every day I put off exploring Iray, I was slipping behind on something that I’d have to learn sooner or later. So DS 4.8 was duly downloaded and installed, and the handy tutorial from Sickleyield’s DeviantArt journal got me started with the appropriate render settings. The first hurdle, at least for me, was getting my head round the different ways of lighting an Iray scene. You do this in Render Settings > Environment, scrolling down to SS Latitude, SS Longitude, SS Day, and SS time. 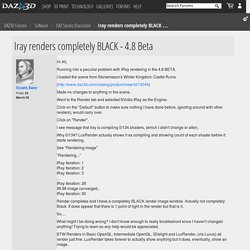 I loaded the scene from Stonemason's Winter Kingdom: Castle Ruins. ( Made no changes to anything in the scene. Went to the Render tab and selected NVidia IRay as the Engine. Click on the "Default" button to make sure nothing I have done before, (goofing around with other renders), would carry over. Click on "Render". I see message that Iray is compiling 0/134 shaders, (which I didn't change or alter). Why 0/134? See "Rendering image" "Rendering... " IRay Iteration: 1 IRay Iteration: 2 IRay Iteration: 3 ... Render completes and I have a completely BLACK render image window. So.... What might I be doing wrong? BTW Renders in Basic OpenGL, Intermediate OpenGL, 3Delight and LuxRender, (via Luxus) all render just fine.