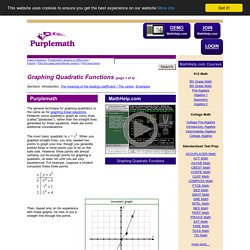 However, since quadratics graph as curvy lines (called "parabolas"), rather than the straight lines generated by linear equations, there are some additional considerations. The most basic quadratic is y = x2. When you graphed straight lines, you only needed two points to graph your line, though you generally plotted three or more points just to be on the safe side. He got the graph wrong. That last point has a rather large y-value, so you decide that you won't bother drawing your graph large enough to plot it. Graphing Quadratic Equations. A Quadratic Equation in Standard Form (a, b, and c can have any value, except that a can't be 0.) 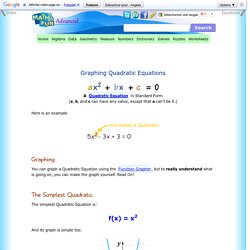 Here is an example: Graphing You can graph a Quadratic Equation using the Function Grapher, but to really understand what is going on, you can make the graph yourself. Read On! How to Graph a Quadratic Equation: 10 Steps. Edit Article Community Q&A When graphed, quadratic equations of the form ax2 + bx + c or a(x - h)2 + k give a smooth U-shaped or a reverse U-shaped curve called a parabola. 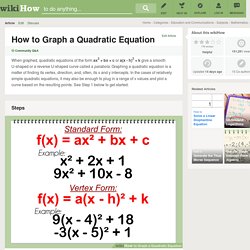 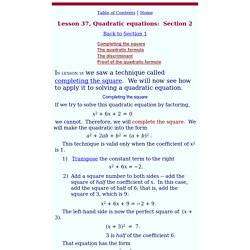 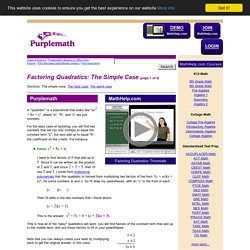 For the easy case of factoring, you will find two numbers that will not only multiply to equal the constant term "c", but also add up to equal "b", the coefficient on the x-term. For instance: Factor x2 + 5x + 6. Factoring Quadratics: The Hard Case. Factoring Quadratics: The Hard Case: The Modified "a-b-c" Method, or "Box" (page 2 of 4) Sections: The simple case, The hard case, The weird case To factor a "hard" quadratic, we have to handle all three coefficients, not just the two we handled in the "easy" case, because the leading coefficient (the number on the x2 term) is not 1. 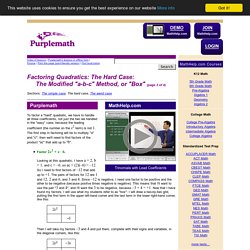