Affective computing. Affective Computing is also the title of a textbook on the subject by Rosalind Picard. 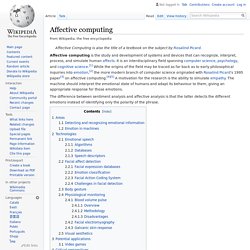 The difference between sentiment analysis and affective analysis is that the latter detects the different emotions instead of identifying only the polarity of the phrase. Areas[edit] Detecting and recognizing emotional information[edit] Detecting emotional information begins with passive sensors which capture data about the user's physical state or behavior without interpreting the input. The data gathered is analogous to the cues humans use to perceive emotions in others. Recognizing emotional information requires the extraction of meaningful patterns from the gathered data. Emotion in machines[edit] Another area within affective computing is the design of computational devices proposed to exhibit either innate emotional capabilities or that are capable of convincingly simulating emotions. 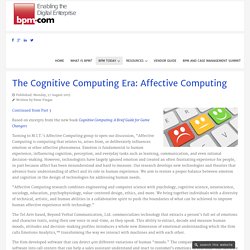 Emotion is fundamental to human experience, influencing cognition, perception, and everyday tasks such as learning, communication, and even rational decision-making. However, technologists have largely ignored emotion and created an often frustrating experience for people, in part because affect has been misunderstood and hard to measure.

Our research develops new technologies and theories that advance basic understanding of affect and its role in human experience. “Affective Computing research combines engineering and computer science with psychology, cognitive science, neuroscience, sociology, education, psychophysiology, value-centered design, ethics, and more. Meet Pepper. Developing digital literacies. Digital literacies are those capabilities which fit an individual for living, learning and working in a digital society. Digital literacy looks beyond functional IT skills to describe a richer set of digital behaviours, practices and identities. What it means to be digitally literate changes over time and across contexts, so digital literacies are essentially a set of academic and professional situated practices supported by diverse and changing technologies.

This definition quoted above can be used as a starting point to explore what key digital literacies are in a particular context eg university, college, service, department, subject area or professional environment. Digital literacies encompasses a range of other capabilities represented here in a seven elements model: The Unlearning Cycle (why we learn and how it's changing) – A.J. JULIANI.

This is the second in a 4-part series answering the question, “Does education really need to change?” 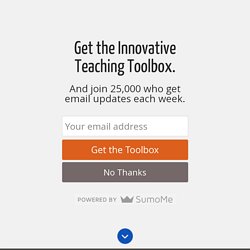 Also, you’ll see these little buttons throughout –> . Click them for sources and sidebar information on the topic. You can read the first, third, and fourth articles here. My parents took our family on a trip to Maine to ski when I was in my early teens. The mountains there are really big, and I was not ready to ski those slopes. My dad (not the best skier either) told me a story about his first time skiing. He explained how he watched the ski lift pass a couple of times before he got the hang of how to catch it at the right moment (if you’ve ever been skiing this a critical skill!). Unaware of the bar to pull over your head, my dad grabbed the side of the lift-chair, holding on for dear life. As he began to rock back and forth in his chair, people below took notice. His group of teenagers also saw what was happening, but it was too late. Learning and Unlearning How crazy of them!? 1. 2. TESConnections.

Why Minecraft is the newest and coolest teaching tool in school. Have you ever heard of Minecraft? 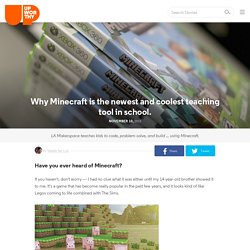 If you haven't, don't worry — I had no clue what it was either until my 14-year-old brother showed it to me. It's a game that has become really popular in the past few years, and it looks kind of like Legos coming to life combined with The Sims. GIF via Daily Motion. In the game, you can build worlds, craft shelters, create tools, and go on missions. It's kind of old school but in a refreshing way. Minecraft might seem like just a sweet video game. Remember when "educational games" involved watching your pixelated family and livestock perish repeatedly on the Oregon Trail?