How to Communicate with an Air Traffic Control Tower: 5 steps. Murphy Laws Site - The origin and laws of Murphy in one place. Bluefish Editor : Movies & Screenshots. Bluefish Movies Some of the new features in Bluefish-2.2.3(watch on youtube) An introduction into bluefish 2.2.0. 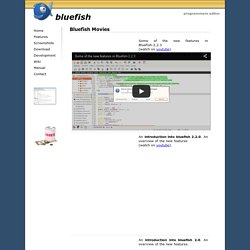 An overview of the new features(watch on youtube). An introduction into bluefish 2.0. An overview of the new features. Working with remote files. Working with projects. Advanced search and replace. Bluefish Screenshots Bluefish 2.2.6 while editing this very page over an sftp connection. Bluefish 2.2.4 (prerelease) as set-up for a user with a visual impairment. You have complete the tutorial! 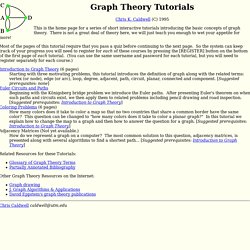 Caldwell (C) 1995 This is the home page for a series of short interactive tutorials introducing the basic concepts of graph theory. There is not a great deal of theory here, we will just teach you enough to wet your appetite for more! Most of the pages of this tutorial require that you pass a quiz before continuing to the next page. So the system can keep track of your progress you will need to register for each of these courses by pressing the [REGISTER] button on the bottom of the first page of each tutorial.

Introduction to Graph Theory (6 pages) Starting with three motivating problems, this tutorial introduces the definition of graph along with the related terms: vertex (or node), edge (or arc), loop, degree, adjacent, path, circuit, planar, connected and component. Euler Circuits and Paths. Define:topology. Define:terminus. Define:scenic. Define:valencie. Define:vertex# Route Planning - the perfect walking tour. Route Planning in Windsor First some history It is said that in Konigsberg, Germany, 1735, there was a river that ran through the city that split into two streams and then joined together again to form an island. 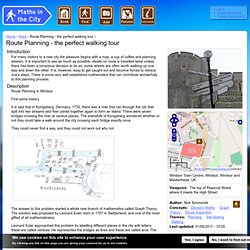 There were seven bridges crossing the river at various places. The townsfolk of Konigsberg wondered whether or not they could take a walk around the city crossing each bridge exactly once. They could never find a way, and they could not work out why not. The answer to this problem started a whole new branch of mathematics called Graph Theory. Leonard Euler approached this problem by labelling different places in the city with letters; these are called vertices.

All four of the vertices in the Konigsberg graph have an odd number of arcs connected to them. The number of arcs attached to a vertex is said to be its valency. There are two possible ways to make all the valencies of the vertices even: 1. 2. Planning a Walk In Windsor Here is a route planning problem based in Windsor. AHDIEH AREF SOLTANE GHALBHA. LYRICS. Define:commotion. Define:resolute. Beard. Partners desk. Partners desk. A partners desk, partner's desk or partners' desk (also double desk) is an antique desk form, which is basically two pedestal desks constructed from the start as one large desk joined at the front, for two users working while facing each other. 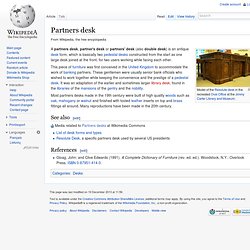 This piece of furniture was first conceived in the United Kingdom to accommodate the work of banking partners. These gentlemen were usually senior bank officials who wished to work together while keeping the convenience and the prestige of a pedestal desk. It was an adaptation of the earlier and sometimes larger library desk, found in the libraries of the mansions of the gentry and the nobility. Most partners desks made in the 19th century were built of high quality woods such as oak, mahogany or walnut and finished with tooled leather inserts on top and brass fittings all around. Many reproductions have been made in the 20th century. See also[edit] Media related to Partners desks at Wikimedia Commons References[edit]

I Love New York logo. “I did the bloody thing in 1975 and I thought it would last a couple of months as a promotion and disappear.”Milton Glaser In this short video Milton Glaser answers the following questions: Are you ever annoyed by the prevalence of the “I Love New York” logo?

Are you upset you don’t have the trademark to the image? Image from Wikipedia New York loves its trademark “New York officials show no mercy in their bid to protect the “I ♥ New York” logo. Excerpted from Business Week. Image from Milton Glaser Image from MR38 Image from geirarne. National CarShare - Welcome.