With teens, everything counts in college campus visit - Style. Sarah Weiler and her high schooler, Simon, rose early, flew from Boston to Washington, D.C., rented a car, and drove an hour to McDaniel College in Maryland, one of the schools on their list. 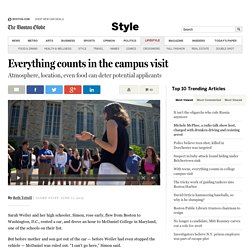 But before mother and son got out of the car — before Weiler had even stopped the vehicle — McDaniel was ruled out. “I can’t go here,” Simon said. Continue reading below. Twitter Hashtags In The Classroom. Cc licensed ( BY ) flickr photo shared by danielmoyle For the last couple of years that I have been on Twitter, I have seen the value of using a hashtag to connect and share ideas between educators all around the world. 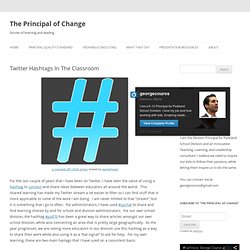 This shared learning has made my Twitter stream a lot easier to filter so I can find stuff that is more applicable to some of the work I am doing. I am never limited to that “stream”, but it is something that I go to often. For administrators, I have used #cpchat to share and find learning shared by and for school and division administrators. For our own school division, the hashtag #psd70 has been a great way to share articles amongst our own school division, while also connecting an area that is pretty large geographically. (Here is a great list of educator hashtags and an article on how to get the most out of them.) Honors Seminar 1 Lecture Series. Innovation in Education: Where is the 21st Century University? By Seth Odell On the heals of a highly successful eduTweetup Boston, Emerson‘s Mike Petroff joins the program to discuss innovation in education. 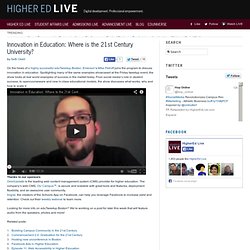 Spotlighting many of the same examples showcased at the Friday tweetup event, the show looks at real world examples of success in the market today. From social media’s role in student success, to opencourseware and new in-class educational models, the show discusses what works, why and how to scale it. Thanks to our sponsors OmniUpdate is the leading web content management system (CMS) provider for higher education.

The company’s web CMS, OU Campus™, is secure and scalable with great tools and features, deployment flexibility, and an awesome user community. Using del.icio.us In Education. Conversation: Imagination in Education. This week, the Lincoln Center Institute in New York is holding what it bills as the “first national conference focused on making imagination an integral part of American education.” 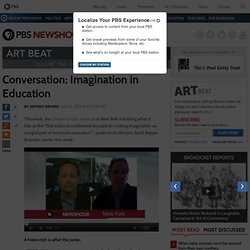 I spoke to its director, Scott Noppe-Brandon, earlier this week: 49806Conversation: Imagination in EducationThis week, the Lincoln Center Institute in New York is holding what it bills as the "first national conference focused on making imagination an integral part of American education. " Jeffrey Brown talks to its director, Scott Noppe-Brandon.2011-07-22 15:37:00disabled2066015187ck4bzk8xsycfalse A transcript is after the jump. JEFFREY BROWN: Welcome once again to Art Beat. SCOTT NOPPE-BRANDON: Thanks, Jeff. JEFFREY BROWN: What do you mean by imagination and why a conference? SCOTT NOPPE-BRANDON: First, imagination for us is the capacity or ability to think of things as if they could be otherwise, to ask the ‘what if’ question. Salman Khan: Let's use video to reinvent education.

How Social Media is Changing the Education Industry [INFOGRAPHIC] Cliche but true: Social media is changing the way we communicate. From the layman users to businesses, almost everyone is part of the online social ecosystem. Now, the education industry seems to be picking pace as things are getting social in schools and universities. Lectures in the form of online videos and podcasts are getting common nowadays. So as using Skype, Twitter and Facebook as a platform to discuss and share classroom materials. Universities are also receiving YouTube video “pitches” from potential students as substitutes for traditional college essays, according to Course Hero’s infographic (below).

The Web is facilitating the future of learning. In Singapore Management University (SMU), a collaborative online wiki is used to help students learn through peer learning, interviews and web research. This infographic will tell you more on how social medial is changing the education industry: What College Rankings Really Tell Us. Carnegie Mellon Researchers Find Crowds Can Write as Well as Individuals - Wired Campus. Researchers at Carnegie Mellon University have found that “crowd-sourced” articles written piecemeal by dispersed writers stack up well against those drafted by one author. 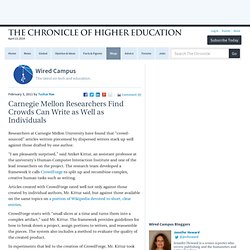 “I am pleasantly surprised,” said Aniket Kittur, an assistant professor at the university’s Human-Computer Interaction Institute and one of the lead researchers on the project. The research team developed a framework it calls CrowdForge to split up and recombine complex, creative human tasks such as writing. Articles created with CrowdForge rated well not only against those created by individual authors, Mr. Kittur said, but against those available on the same topics on a portion of Wikipedia devoted to short, clear entries.

CrowdForge starts with “small slices at a time and turns them into a complex artifact,” said Mr. In experiments that led to the creation of CrowdForge, Mr. CrowdForge assigned the same simple tasks for any project to several people, Mr. New on Facebook: an MBA - London school offers degree via social networking site.