Everybody meet Spiderman Chapter 1, a Spider-Man + Avengers Crossover fanfic. I do not own Avengers or Spider-man. 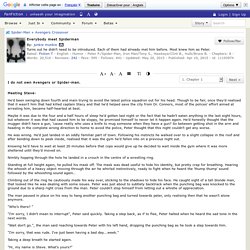 Meeting Steve- He'd been swinging down fourth and main trying to avoid the latest police squadron out for his head. Though to be fair, once they'd realised that it wasn't him that had killed captain Stacy and that he'd helped save the city from Dr. Connors, most of the polices' effort aimed at arresting him, became half-hearted at best. Maybe it was due to the four and a half hours of sleep he'd gotten last night or the fact that he hadn't eaten anything in the last eight hours, but whatever it was that had caused him to be sloppy, he promised himself to never let it happen again.

He was wrong. Knowing he'd have to wait at least 20 minutes before that cops would give up he decided to wait inside the gym where it was more sheltered until they'd moved on. Nimbly hopping through the hole he landed in a crouch in the centre of a wrestling ring. Standing at full height again, he pulled his mask off. Court Etiquette, a justice league fanfic. Summary: While still dealing with the aftermath of Superman's return, Batman received an unexpected visitor at the BatCave. 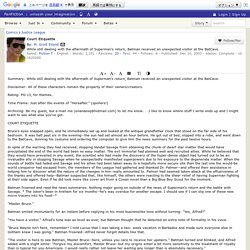 Disclaimer: All of these characters remain the property of their owners/creators. Rating: PG-13, for themes. Time Frame: Just after the events of "Hereafter. " (spoilers!) Archiving: Be my guest, but e-mail me (eilandesq@hotmail.com) to let me know. . .I like to know where stuff I write ends up and I might want to see what else you've got.

Bruce's eyes snapped open, and he immediately sat up and looked at the antique grandfather clock that stood on the far side of his bedroom. Reveal, a Spider-Man + Avengers Crossover fanfic. Little was known about Tony Stark's son. 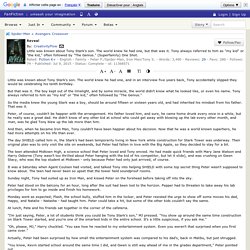 The world knew he had one, and in an interview five years back, Tony accidentally slipped they would be celebrating his tenth birthday. But that was it. The boy kept out of the limelight, and by some miracle, the world didn't know what he looked like, or even his name. Tony always referred to him as "my kid" or "the kid," often followed by "The Genius. " So the media knew the young Stark was a boy, should be around fifteen or sixteen years old, and had inherited his mindset from his father. Every hero counts, a Spider-Man + Avengers Crossover fanfic. This is a random one shot I thought about when reading several Spider-Man/Avengers stories, I read too many. 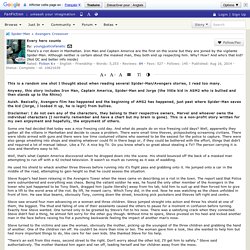 Anyway, this story includes Iron Man, Captain America, Spider-Man and Jorge (the little kid in ASM2 who is bullied and then stands up to the Rhino) Auish. Basically, Avengers film has happened and the beginning of AMS2 has happened, just past where Spider-Man saves the kid (Jorge, I looked it up, he is legit) from bullies. Disclaimer: I do not own any of the characters, they belong to their respective owners, Marvel and whoever owns the individual characters (I normally remember and have a chart but my brain is gone).

This is a non-profit story written for my own enjoyment and hopefully, the enjoyment of others. Some one had decided that today was a nice freezing cold day. Well, that's what Captain America discovered when he dropped down into the scene. He used his shield to whack another three thieves before running into it's flight pass and grabbing onto it. Great Grandpa Cap Chapter 1, a Spider-Man + Avengers Crossover fanfic. To all those reading The Secrets we Hold, I've not given up on it, I just need to get in the swing of writing again and hopefully this will do the trick This order of events: - Captain America: the first avenger - Amazing Spiderman - The Avengers - Iron Man 3 (Although pretend this was in January of 2013) - This is set around March 2013 (no idea why) 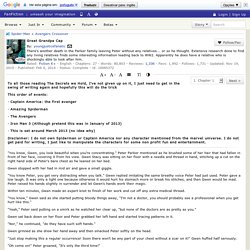 Gift Horses Chapter 1, a justice league fanfic. Diana was slouched in Bruce's computer chair, head resting on her hand and eyes barely open when the familiar hum of the Batmobile's engine willed her eyes to stay open. 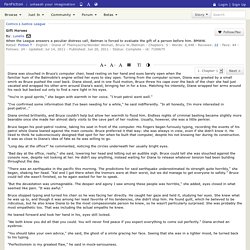 Turning from the computer screen, Diana was greeted by a small smirk as Bruce pushed the cowl back. Diana stood, and in one fluid motion, Bruce threw his cape over the back of the chair she had just vacated and wrapped his other arm around Diana's waist, bringing her in for a kiss. Matching his intensity, Diana wrapped her arms around his neck but backed out only to find a rare light in his eyes. "You're in good spirits," she began with warmth in her voice. Surprise! It's an Adult!, a Harry Potter + Avengers Crossover fanfic. Fandoms: Harry Potter, Avengers Characters: Tony Stark, Steve Rogers, Harry Potter Prompt: We know from the movie they take blood to try to remake the super juice, what if they took sperm to make the next generation hero. 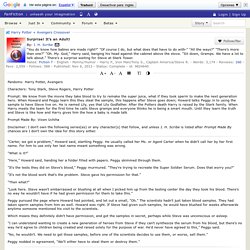 When Howard and Peggy learn this they steal the sample, this happens after Steve goes down; Howard talks Peggy in to using the sample to have Steve live on. He is named Lily, yes that Lily Godfather. After the Potters death Harry is raised by the Stark family. SpiderMan hearts Jenny W Chapter 1, a marvel fanfic. Jen Walters stared at the two-gallon plastic jug of beer and wished she could get drunk. 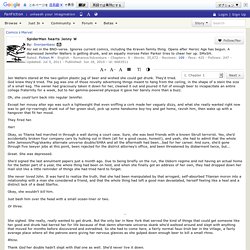 They'd tried. God knew they'd tried. The jug was one of those novelty advertising things meant to hang from the ceiling, in the shape of a stein the size of a small keg. The owner had graciously taken it down for her, cleaned it out and poured it full of enough beer to incapacitate an entire college fraternity for a week, but to her gamma-powered physique it gave her barely more than a buzz. Harry Potter Deathly Avenger Book 3 Chapter 1, a Harry Potter + Avengers Crossover fanfic. Harry Potter: Deathly Avenger Book 3 By Stargatesg1fan1 Disclaimer: I own nothing of any recognized character or universe within. 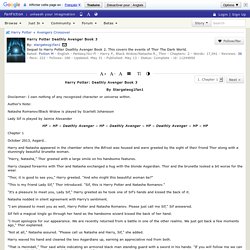 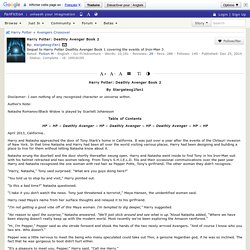 Natasha Romanov/Black Widow is played by Scarlett Johansson. Chance Encounters Chapter 1: Runaway Bob: Clint, a Harry Potter + Avengers Crossover fanfic. Disclaimer: I do not own/get money from Marvel's The Avengers or J.K. Rowling's Harry Potter. I just like playing in their sand boxes. Harry Potter: The Avenger Chapter 1: The Brave New World, a Harry Potter + Avengers Crossover fanfic. Title: Harry Potter: The AvengerWhen: After the final battle, but before the epilogue of book 7.Rated: T (PG-15), Sexual Situations but nothing explicitSummary: Harry becomes disillusioned with his world after defeating Voldemort and decides to go traveling, ending up in another dimension that's similar but not quite the same as his original one. He makes friends with the Avengers.A/N: This is something I felt like doing just to write a story with a different flavor. It's not really deep, just fun. It's my take on what might happen if Harry landed in the end of the Avenger movie and how he'd change more than himself.

This should be 7 medium length chapters.Disclaimer: Harry Potter is owned by someone commonly known as JKR. The Avengers are owned by someone commonly known as Marvel. Falling In: America's Trial, a marvel fanfic. Falling In Tyene: (in a different set of armor) What the heck? Wanda: Oh, you're in comic book continuity now. Different backstories and different plots, so different armor and temperament. Tyene: Huh. Wanda: I wrote this one shot out of frustration, mostly, after reading Civil War and a few of the lead ins to Dark Reign. At the Courthose The trail of Captain America.

And here I thought that these people couldn't get any stupider. My name is Carrie Richter. The Institute Saga: Side Stories Chapter 1: Preface, a Superman + Marvel Crossover fanfic. The Institute Saga III Chapter 1: Prologue, a DC Superheroes + Marvel Crossover fanfic. Author's Note – I do not own any of the characters, Marvel and DC do.This is a sequel to The Institute Saga II (& Side Stories), but I'm sure you already knew that.I'll be posting chapter a week, but starting you off with two (Including this one).Enjoy! Prologue What Has Gone Before (Part One) The sole survivor of an ancient race, Kal-El, son of the scientist Jor-El and his wife Lara Lor-Van, was sent to Earth as an infant mere moments before Krypton was destroyed.

Author's Note :- In this crossover fic, Superman (and possibly Supergirl) will be the only import(s) from DC. Happily Ever After?, a Harry Potter + Justice League Crossover fanfic. The Haggard Hag He sat at the bar, his face dirty and grimy. Being in the general vicinity of a forty seven story building as it's destroyed is a messy business. Being nearly underneath it as it became rubble is a very messy business.

The whisky in his glass swirled once, twice but before it made a third circuit in the glass, he upended the container, pouring the alcohol down his throat. Spider-Man Black Chapter 1: Prologue, a spider-man fanfic. Authorial Note :- Although this story is based on the Ultimate Spiderman timeline, I know very little about it compared to my knowledge of Transformers, Justice League etc. Therefore, it is best to consider this story as an AU which hit the same point where Peter Parker lost Aunt May, MJ and Harry to the Green Goblin. All characters and rights belong to Marvel, all mistakes are mine. Superman: Legacy, a superman fanfic.

I do own any rights to the DC characters named within. Wonder Woman: Wonder-Pony, a wonder woman fanfic. I do not own Wonder Woman, or any DC characters named within. SpiderMan's Guide to Superheroics Chapter 1: Intro, a spider-man fanfic. When Pantheons Collide Chapter 1: Prologue, an Avengers + Justice League Crossover fanfic. Let's face it: we all love the concept of Thor vs. Superman. Marvel Hangover Chapter 1: Prologue, a Spider-Man + Marvel Crossover fanfic. Here is a silly little story I thought up after watching the film 'Avengers Assemble' at the cinema and then the two 'Hangover' films at a mate's house. As well as that episode in Smallville where Zatanna sent the group enchanted wine and got them all drunk. And also from the long asked question of; what would Marvel heroes do when they're both partying in Vegas AND drunk? Just so you know, here in England we aren't very in touch with the comic universe, mostly because the books take so long to get over here.

My local shops have only just got the 'Fear Itself' books at the beginning of the month, and I only have the Spiderman one, which I got for a birthday present, and the 'Brightest Day' books in DC a few weeks before that. Thwip Snikt Chapter 1: Unlikely Encounter, a x-men fanfic. The death of Batman, a batman fanfic. Spidey's Life is a Game! Chapter 1: Team Amazing Assemble!, a Spider-Man + Marvel vs Capcom Crossover fanfic.