Welcome to Forbes. Tesla Plans To Open Car Doors To All Hackers This Summer, Claim Sources. Last year, hackers competed to exploit the connected parts of a Tesla Model S to win $10,000. 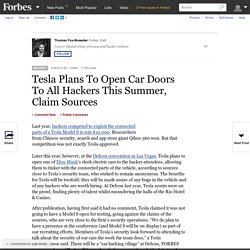 Researchers from Chinese security, search and app store giant Qihoo 360 won. But that competition was not exactly Tesla-approved. Later this year, however, at the Defcon convention in Las Vegas, Tesla plans to open one of Elon Musk’s sleek electric cars to the hacker attendees, allowing them to tinker with the connected parts of the vehicle, according to sources close to Tesla’s security team, who wished to remain anonymous. The benefits for Tesla will be twofold: they will be made aware of any bugs in the vehicle and of any hackers who are worth hiring. At Defcon last year, Tesla scouts were on the prowl, finding plenty of talent whilst meandering the halls of the Rio Hotel & Casino.

A Tesla Model S P85d car is displayed at the 16th Shanghai International Automobile Industry Exhibition in Shanghai on April 20, 2015. A handful of car makers have responded too. Tesla’s Next Big Idea: Storing Power. Tesla Tops List of Brands with the Most Cultural Traction - CMO Today. Welcome to Forbes. Tesla promises "auto-steering" update to Model S; adds range assurance app. Most software updates aren't news — but then the Tesla Model S isn't like most vehicles. 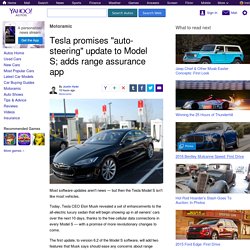 Today, Tesla CEO Elon Musk revealed a set of enhancements to the all-electric luxury sedan that will begin showing up in all owners' cars over the next 10 days, thanks to the free cellular data connections in every Model S — with a promise of more revolutionary changes to come. The first update, to version 6.2 of the Model S software, will add two features that Musk says should ease any concerns about range anxiety. The first, called range assurance, updates the car's ability to reach the nearest Tesla charging point every 30 seconds, based not just on the vehicle but the status of the company's Supercharger points.

If it senses that a vehicle is about to travel too far, it alerts the driver, much like the low-gas light on traditional cars. "The software update effectively makes its impossible for a Model S driver to run out of range," Musk said. Could Apple Compete With Tesla? Tesla Motors is challenging auto companies to boost electric car innovation, but the company will soon challenge utility companies also by designing a battery that could power a house. 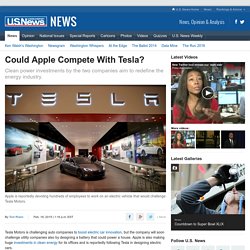 Apple is also making huge investments in clean energy for its offices and is reportedly following Tesla in designing electric cars. [READ: Apple Leads Clean Energy Trend With Solar Deal] Tesla has big plans for energy storage innovation with the development of its Gigafactory to mass produce batteries, which is under construction near Reno. Nevada, and could be completed around 2017. Tesla has forecast that the Gigafactory will be capable of building batteries for 500,000 electric vehicles per year by 2020. Tesla’s CEO Elon Musk revealed in a recent earnings call that his company will “unveil the Tesla home battery … consumer battery that will be for use in people’s houses or businesses, fairly soon.” Tesla Supercharger stations in the U.S.

[ALSO: Elon Musk Talks Tesla's Supercharger Future] Musk told U.S. Management Theories & Concepts at the Workplace. Tesla Posts Quarterly Loss But Beats Production Goal. Google Nears $1 Billion Investment in SpaceX. Tesla Motors. The story of JB's career started at a junkyard in Wisconsin, where, at the age of 14, he discovered a discarded electric golf cart and decided to rebuild it. 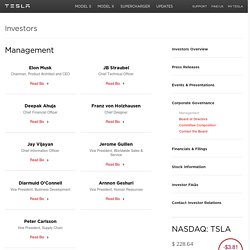 Thus began a lifelong fascination with energy work and electric vehicles. As a co-founder of Tesla, JB has overseen the technical and engineering design of the vehicles, focusing on the battery, motor, power electronics, and high-level software sub-systems. Additionally, he evaluates new technology, manages vehicle systems testing, and handles technical interface with key vendors. Prior to Tesla, JB was the CTO and co-founder of the aerospace firm, Volacom, which designed a specialized high-altitude electric aircraft platform using a novel power plant.

At Volacom, JB invented and patented a new long-endurance hybrid electric propulsion concept that was later licensed to Boeing. About Tesla. Tesla Motors was founded in 2003 by a group of engineers in Silicon Valley who wanted to prove that electric cars could be better than gasoline-powered cars. 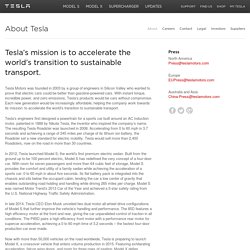 With instant torque, incredible power, and zero emissions, Tesla’s products would be cars without compromise. Each new generation would be increasingly affordable, helping the company work towards its mission: to accelerate the world’s transition to sustainable transport. Tesla’s engineers first designed a powertrain for a sports car built around an AC induction motor, patented in 1888 by Nikola Tesla, the inventor who inspired the company’s name. The resulting Tesla Roadster was launched in 2008. Accelerating from 0 to 60 mph in 3.7 seconds and achieving a range of 245 miles per charge of its lithium ion battery, the Roadster set a new standard for electric mobility.