Can the Right Diet Prevent Cancer? As a society, we have a great fear of cancer—and it’s not hard to see why. 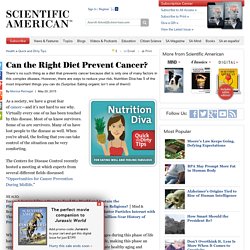 Virtually every one of us has been touched by this disease. Most of us know survivors. Some of us are survivors. Many of us have lost people to the disease as well. When you're afraid, the feeling that you can take control of the situation can be very comforting. Why midlife? Continue reading on QuickAndDirtyTips.com. Melanoma Tumor 'Dissolves' After 1 Dose of New Drug Combo. A large melanoma tumor on a woman's chest disappeared so quickly that it left a gaping hole in its place after she received a new treatment containing two melanoma drugs, a new case report finds. 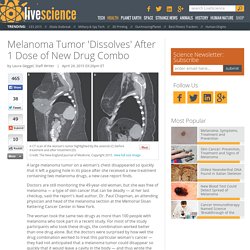 Doctors are still monitoring the 49-year-old woman, but she was free of melanoma — a type of skin cancer that can be deadly — at her last checkup, said the report's lead author, Dr. Paul Chapman, an attending physician and head of the melanoma section at the Memorial Sloan Kettering Cancer Center in New York. The woman took the same two drugs as more than 100 people with melanoma who took part in a recent study. For most of the study participants who took these drugs, the combination worked better than one drug alone. But the doctors were surprised by how well the drug combination worked to treat this particular woman's cancer — they had not anticipated that a melanoma tumor could disappear so quickly that it would leave a cavity in the body — and thus wrote the report describing her case. The Future of Cancer: Prevention and Precision Medicine. Too many vitamins can cause cancer.

New Protein Supercharges Immune System to Fight Cancer. By Orion Jones Scientists have discovered a new protein that appears to supercharge the body's own immune system, allowing it to compete against cancerous cells in ways that were previously impossible. 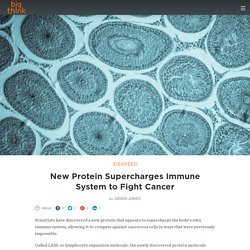 Called LEM, or lymphocyte expansion molecule, the newly discovered protein molecule allows the immune system to continuously produce high quantities of T cells, which are the body's natural defense against cancer. "This is a completely unknown protein. Nobody had ever seen it before or was even aware that it existed. Un fármaco contra la leucemia permite "atacar" el cáncer de páncreas. 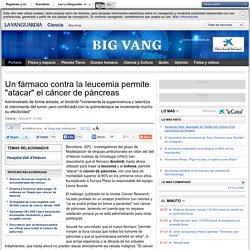 Your Microbiome May Hold Keys To Cancer Treatment. Personal cancer vaccine research 'exciting' say experts - BBC News. Tailor-made cancer vaccines that target unique genetic errors in a patient's tumour have been developed in the US. 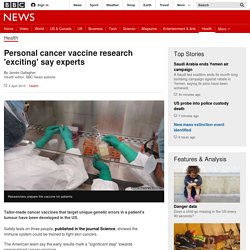 Safety tests on three people, published in the journal Science, showed the immune system could be trained to fight skin cancers. The American team say the early results mark a "significant step" towards personalised cancer vaccines. The charity Cancer Research UK called the tests an "exciting but very early-stage trial". UV light can transform healthy skin cells into deadly melanomas by damaging the DNA. The tumours are a genetic mess, containing hundreds of random mutations that are different in every patient.

Neoantigens The mutations can change the proteins that stick out from the surface of cells and act like identifying flags. The team, mainly based in St Louis and Oklahoma City, analysed the genetic mutations to predict the new and unique flags that would be flown by the cancer cells. Personalised vaccines were given to three patients with advanced tumours in 2013. Oncogene regulated by nutrients identified. Scientists from the Growth Factors, Nutrients and Cancer Group at the Spanish National Cancer Research Center (CNIO), led by Nabil Djouder, have discovered that the MCRS1 protein, in response to an excess of nutrients, induces an increase in the activity of mTOR (the mammalian/mechanistic Target of Rapamycin); a protein that is altered in human diseases such as cancer and diabetes, processes associated with aging, as well as in certain cardiovascular and neurodegenerative pathologies. 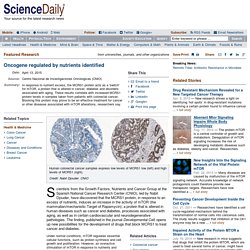 The finding, published in the journal Developmental Cell, opens up new possibilities for the development of drugs that block MCRS1 to treat cancer and diabetes. Under normal conditions, mTOR regulates essential cellular functions, such as protein synthesis and cell growth and proliferation. Telomeres and cancer mortality: The long and the short of it. Telomeres are short stretches of repeated nucleotides that protect the ends of chromosomes. 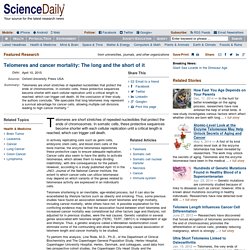 In somatic cells, these protective sequences become shorter with each cellular replication until a critical length is reached, which can trigger cell death. In actively replicating cells such as germ cells, embryonic stem cells, and blood stem cells of the bone marrow, the enzyme telomerase replenishes these protective caps to ensure adequate replication. Cancer cells also seem to have the ability to activate telomerase, which allows them to keep dividing indefinitely, with dire consequences for the patient.

However, according to a study published April 10 in the JNCI: Journal of the National Cancer Institute, the extent to which cancer cells can utilize telomerase may depend on which variants of the genes related to telomerase activity are expressed in an individual's cells. Breakthrough in cancer research: Cancer-suppressing proteins. A digital field guide to cancer cells. Risk of breast and ovarian cancer may differ by type of BRCA1, BRCA2 mutation. Scientists Convert Cancer Cells Into Harmless Immune Cells. Laboratory studies do not often go as planned, and while this is usually a source of endless frustration amongst scientists, some wonderful discoveries have been made by accident in the past, such as the pacemaker and penicillin. 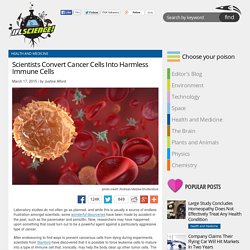 Now, researchers may have happened upon something that could turn out to be a powerful agent against a particularly aggressive type of cancer. After endeavoring to find ways to prevent cancerous cells from dying during experiments, scientists from Stanford have discovered that it is possible to force leukemia cells to mature into a type of immune cell that, ironically, may help the body clear up other tumor cells. La toxina del tétanos, un aliado contra un letal tumor cerebral. New nanodevice defeats drug resistance. Chemotherapy often shrinks tumors at first, but as cancer cells become resistant to drug treatment, tumors can grow back. 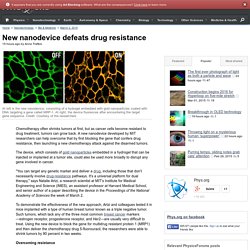 A new nanodevice developed by MIT researchers can help overcome that by first blocking the gene that confers drug resistance, then launching a new chemotherapy attack against the disarmed tumors. The device, which consists of gold nanoparticles embedded in a hydrogel that can be injected or implanted at a tumor site, could also be used more broadly to disrupt any gene involved in cancer. "You can target any genetic marker and deliver a drug, including those that don't necessarily involve drug-resistance pathways. It's a universal platform for dual therapy," says Natalie Artzi, a research scientist at MIT's Institute for Medical Engineering and Science (IMES), an assistant professor at Harvard Medical School, and senior author of a paper describing the device in the Proceedings of the National Academy of Sciences the week of March 2.

+24, canal 24h en directo y multicámara. The causes of cancer you can control. Can cancer be prevented? 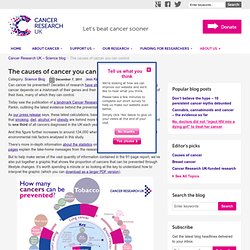 Decades of research have shown that a person’s chances of getting cancer depends on a mishmash of their genes and their environment, but also certain aspects of their lives, many of which they can control. Today saw the publication of a landmark Cancer Research UK-funded review by Professor Max Parkin, outlining the latest evidence behind the preventable causes of UK cancers. As our press release says, these latest calculations, based on predicted cases for 2010, show that smoking, diet, alcohol and obesity are behind more than 100,000 cancers. This is equivalent to one third of all cancers diagnosed in the UK each year. And this figure further increases to around 134,000 when taking into account all 14 lifestyle and environmental risk factors analysed in this study. There’s more in-depth information about the statistics on our website, and our healthy living pages explain the take-home messages from the research.

“Anthrax toxin is a professional at delivering large enzymes into cells,” says Bradley Pentelute, the Pfizer-Laubauch Career Development Assistant Professor of Chemistry at MIT. “We wondered if we could render anthrax toxin nontoxic, and use it as a platform to deliver antibody drugs into cells.” In a paper appearing in the journal ChemBioChem, Pentelute and colleagues showed that they could use this disarmed version of the anthrax toxin to deliver two proteins known as antibody mimics, which can kill cancer cells by disrupting specific proteins inside the cells.

La dieta mediterránea puede reducir hasta un 30% el riesgo de cáncer de mama. MADRID, 2 Sep. (EUROPA PRESS) - Sur Twitter : Don’t Believe the Hype – 10 Persistent #Cancer #Myths Debunked, by @harpistkat. Don’t Believe the Hype – 10 Persistent Cancer Myths Debunked. Google ‘cancer’ and you’ll be faced with millions of web pages. And the number of YouTube videos you find if you look up ‘cancer cure’ is similarly vast. The problem is that much of the information out there is at best inaccurate, or at worst dangerously misleading. There are plenty of evidence-based, easy to understand pages about cancer, but there are just as many, if not more, pages spreading myths. And it can be hard to distinguish fact from fiction, as much of the inaccurate information looks and sounds perfectly plausible.

Strange Siberian Spikes Prompt Astronauts to Phone Home. Houston, we have a question: What are these weird spiky shapes we're seeing as we fly over Siberia? That's what astronauts were asking this June, when the sight of strange, dark-green features running along Siberia's Kulunda Steppe left them stumped, according to NASA's Earth Observatory. The curving features streak across the plain near the Ob River, and can be seen from the International Space Station (ISS) when it flies over the Northern Hemisphere's 52nd parallel, the highest latitude of its orbit. Fortunately for the ISS astronauts' burning curiosity, researchers at NASA Johnson Space Center in Houston had answers. The spikes are a side effect of the geology of the region: Folded surface rocks (shaped by tectonic forces) dip lower than the surrounding land, creating long, linear valleys filled with pine forests.

On a personal note: cancer genomics and personalized medicine. When I was three years old my grandma passed away after a long fight with cancer. I should disclaim quickly: it never affected me greatly, since I was too young to remember anything. I know, though, that that experience was a gruelling one for my mum, who cared for our grandma during the therapy – battle with cancer ain’t pretty in general, and it was even worse then. It would of course be easy to blame the health system of the communist regime in which we lived at the time but the truth is that the treatment strategy was pretty much the same all over the place: surgery, radiotherapy, chemotherapy.