Busan Awesome - things to do in Busan. The Posh Nosh look is warehouse chic. 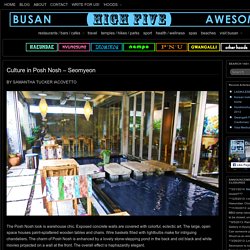 Exposed concrete walls are covered with colorful, eclectic art. The large, open space houses paint-splattered wooden tables and chairs. Wire baskets filled with lightbulbs make for intriguing chandeliers. The charm of Posh Nosh is enhanced by a lovely stone-stepping pond in the back and old black and white movies projected on a wall at the front. The overall effect is haphazardly elegant.

The Pho, Nampo-dong. Firstly, we reviewed this restaurant mere days after returning from our trip to Vietnam. 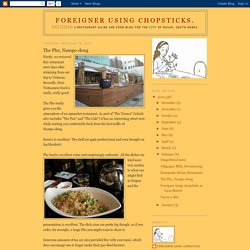 Secondly, their Vietnamese food is really, really good. The Pho really gives you the atmosphere of an upmarket restaurant. As part of "The Terrace" (which also includes "The Pan" and "The Cafe") it has an interesting street view while seating you comfortably back from the foot traffic of Nampo-dong. Service is excellent. The staff are quite professional and even brought us lap blankets! Home. 하바네로. For 91 Days in Busan – Travel Blog. Korean Cookbooks We’re more than halfway through out time in Busan, and still haven’t gotten sick of the food. 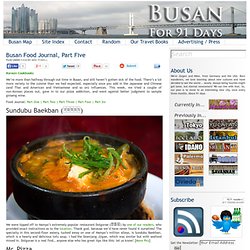 There’s a lot more variety to the cuisine than we had expected, especially once you add in the Japanese and Chinese (and Thai and American and Vietnamese and so on) influences. This week, we tried a couple of non-Korean places out, gave in to our pizza addiction, and went against better judgment to sample ginseng wine. Food Journal: Part One | Part Two | Part Three | Part Four | Part Six Sundubu Baekban (순두부백반) We were tipped off to Nampo’s extremely popular restaurant Dolgorae (돌고래) by one of our readers, who provided exact instructions as to the location. Mr. Mr. Insamju (인삼주) In Korea, ginseng is big business. Sweet & Sour Cocktail Shop (짬뽕 탕수육 전문점) After Japanese, Chinese is probably the second-most popular type of foreign food in Busan. 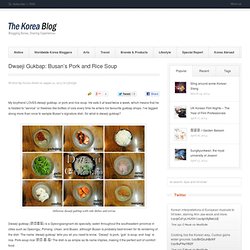 He eats it at least twice a week, which means that he is treated to “service” or freebies like bottles of cola every time he enters his favourite gukbap shops. I’ve tagged along more than once to sample Busan’s signature dish. So what is dwaeji gukbap? Delicious dwaeji gukbap with side dishes and extras Dwaeji gukbap (돼지국밥) is a Gyeongsangnam-do specialty, eaten throughout the southeastern province in cities such as Gyeongju, Pohang, Ulsan, and Busan, although Busan is probably best known for its rendering of the dish. Pork bones (dwaeji sagol, 돼지사골) are boiled down three times to make the soup broth.

Prep time! After putting the whole lot in a hot stone pot, you can mix in prepared condiments to taste. Add a little rice and your dwaeji gukbap is ready to enjoy! If you think that sounds delicious, you’re not the only one. The rap and hip-hop pop group Clover (클로버) took it a step further with their song titled –what else? Food in Gwangan. Pocket guide to Busan: 11 best eats and sights. The stars are here, the queues are long and the fans are screaming. 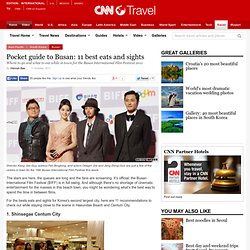 It's official: the Busan International Film Festival (BIFF) is in full swing. And although there's no shortage of cinematic entertainment for the masses in this beach town, you might be wondering what's the best way to spend the time in between films. For the bests eats and sights for Korea's second largest city, here are 11 recommendations to check out while staying close to the scene in Haeundae Beach and Centum City. 1. Shinsegae Centum City Who are you calling a food court? Yes, the Food Hall at Shinsegae Department Store is basically a mall food court, but that's such a misnomer for this smorgasbord of gustatory delights. New, fancy British pub in Busan - Haps Magazine. Bars & Clubs By Haps Staff | 0 Comments The New Malden is a new, fancy British pub in Busan. 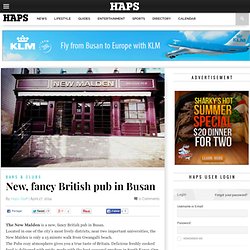 Located in one of the city’s most lively districts, near two important universities, the New Malden is only a 15 minute walk from Gwangalli beach. The Pubs cozy atmosphere gives you a true taste of Britain. Delicious freshly cooked food is delivered with pride, made with the best seasonal produce in South Korea. We also offer live football matches (mostly English premiership) and darts. 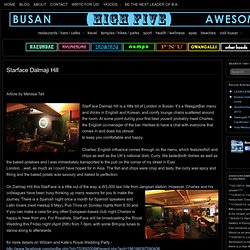 It’s a WaegukBar, menu and drinks in English and Korean, and comfy lounge chairs scattered around the room. At some point during your first beer youwill probably meet Charles, the English co-manager of the bar. Helikes to have a chat with everyone that comes in and does his utmost to keep you comfortable and happy. Charles’ English influence comes through on the menu, which featuresfish and chips as well as the UK’s national dish, Curry. On Dalmaji Hill this StarFace is a little out of the way, a W3,000 taxi ride from Jangsan station. For more details on William and Kate’s Royal Wedding Party -