Volkswagen shares plunge 18% on exhaust scandal - BBC News. Image copyright Getty Images Volkswagen shares have plunged more than 18% after US regulators found that some of its cars could manipulate official emissions tests. 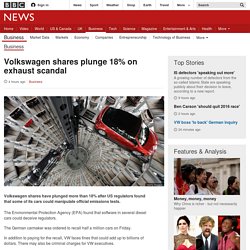 The Environmental Protection Agency (EPA) found that software in several diesel cars could deceive regulators. The German carmaker was ordered to recall half a million cars on Friday. Fashion Politics: Fashion as a Voice for Change? The UK’s General Election is fast approaching. 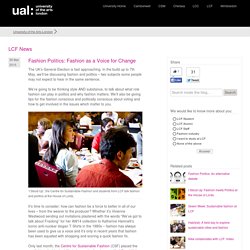 Fashtivism: "I just use fashion as an excuse to talk about politics" When a band of beautiful, angry young women storm the streets holding placards, the world listens. 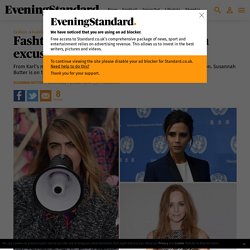 Undeniably, it helps when the chief firebrand is a supermodel. Yesterday in Paris, the cradle of protest, Cara Delevingne led an uprising; dressed for battle in a power suit with her megaphone held high. A line of the best-dressed protesters in recent history followed in her wake brandishing signs demanding “divorce for all”, “history, her story” and “match the machos”. The activists accessorised with bags reading “make fashion not war”, but this was not a straightforward outpouring of political sentiment. All participants wore Chanel, for this was the fashion house’s spring/summer 2015 show and a sure-fire sign that activism is in vogue. Labour would renationalise railways 'line by line,' says Jeremy Corbyn - BBC News. Image copyright PA A Labour government would renationalise the railways by regaining control of franchises as they expire, new leader Jeremy Corbyn is expected to reveal. 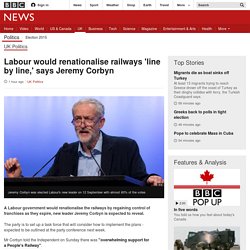 The party is to set up a task force that will consider how to implement the plans - expected to be outlined at the party conference next week. Greece election: Conservative New Democracy admits defeat - BBC News. Image copyright AP Greece's conservative New Democracy party has admitted defeat to Alexis Tsipras's left-wing Syriza in the nation's fifth election in six years. 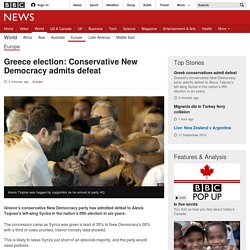 The concession came as Syriza was given a lead of 35% to New Democracy's 28% with a third of votes counted, interior ministry data showed. This is likely to leave Syriza just short of an absolute majority, and the party would need partners. Labour MP Jess Phillips: I Told Diane Abbott To F*ck Off During Feminism Row. Labour MP Jess Phillips told Diane Abbott to “fuck off” during a heated row about a lack of women in the top shadow cabinet jobs, The Huffington Post UK can reveal. 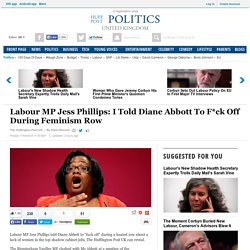 The Birmingham Yardley MP clashed with Ms Abbott at a meeting of the Parliamentary Labour Party (PLP) on Monday, after it emerged the four top jobs in Mr Corbyn’s team had gone to men. As well as Mr Corbyn as leader, Andy Burnham is Shadow Home Secretary, Hilary Benn in Shadow Foreign Secretary and John McDonnell is Shadow Chancellor. Ms Abbott accused Ms Phillips of asking a “sanctimonious” question, and told her “you’re not the only feminist in the PLP.” Mr Corbyn looked on in silence as the two MPs argued. UK Plus Size Fashion Week Founder, Rianne Ward, On Why We Should Embrace The Term 'Plus Size' There's a lot of debate about whether the fashion industry should ditch the term "plus-size", but one woman firmly behind keeping it alive is Rianne Ward. 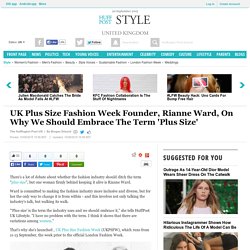 Ward is committed to making the fashion industry more inclusive and diverse, but for her the only way to change it is from within - and this involves not only talking the industry's talk, but walking its walk. "'Plus-size' is the term the industry uses and we should embrace it," she tells HuffPost UK Lifestyle. "I have no problem with the term. I think it shows that there are variations among women. " That's why she's launched , UK Plus Size Fashion Week (UKPSFW), which runs from 11-13 September, the week prior to the official London Fashion Week. UK Plus Size Fashion Week runs from 11-13 September Ward hopes the event's timing, central London location and professionalism will help establish plus size fashion as a "serious" player within the industry.

The event builds on British Plus Size Fashion Week, an event Ward co-founded in 2013. Debate: Does Fashion Have A Place In Politics? Topshop Gets Called Out For Unrealistic Mannequin Body Standards. How can we safeguard the people who make our clothing? Inside Fashion’s Instagram Wars. Migrants: Hungary Declares Border Emergency. By Stuart Ramsay, Chief Correspondent, In Roszke, Hungary Hungary has detained 60 migrants for illegally crossing the Serbian border fence as it imposed tough new rules to secure its southern frontier and stop the flow of refugees. 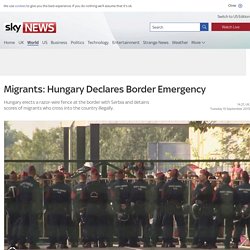 Authorities erected a razor-wire fence overnight at a railway track used by tens of thousands of refugees to cross into Hungary from neighbouring Serbia, a non-EU nation. Hungary also declared a state of emergency in two southern counties near the border because of the migration crisis. Migrants pressing against a barrier at the border with Hungary The Hungarian army has already been deployed in the south of the country‎ but reinforcements may be sent to the crisis areas. On Tuesday, police detained 60 migrants for breaching the razor-wire fence, the government said. Video: Born On The Road To Europe. Swatch CEO Plays down China Turbulence. ZURICH, Switzerland — Swiss watchmaker Swatch is not worried by economic and market turbulence in China, Chief Executive Nick Hayek told a Sunday newspaper, noting its sales to Chinese customers will rise when stripping out exchange rate swings. 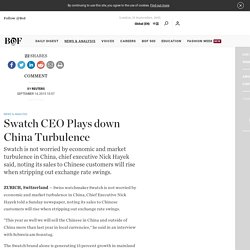 "This year as well we will sell the Chinese in China and outside of China more than last year in local currencies," he said in an interview with Schweiz am Sonntag. The Swatch brand alone is generating 15 percent growth in mainland China and other brands single-digit growth when measured in local currencies and units, he said. Despite the strong Swiss franc, watch sales in the Swiss cities of Lucerne and Interlaken, popular with tourists, were in some cases up by half or more in July and August. Jeremy Corbyn vows to fight austerity in TUC speech - BBC News. Jeremy Corbyn has vowed to fight the government's proposed welfare cuts and other austerity measures, labelling the Conservatives "poverty deniers". 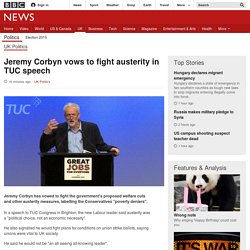 In a speech to TUC Congress in Brighton, the new Labour leader said austerity was a "political choice, not an economic necessity". He also signalled he would fight plans for conditions on union strike ballots, saying unions were vital to UK society. He said he would not be "an all-seeing all-knowing leader". He told delegates that he wanted input from all parts of society, including unions, to develop a different kind of inclusive, digital politics. Emily Weiss: Blogger to Social Brand Builder. NEW YORK, United States — When Into The Gloss blogger Emily Weiss launched Glossier, her digital-first beauty brand, last October, she knew she wanted to ground the business in feedback from consumers. Over the past year, Weiss has gleaned plenty of insights — from Instagram comments, emails and online surveys — that she has been able to leverage as she develops her brand, product offering and customer experience. Zendaya schools the world on cultural appropriation.

In a new interview Zendaya has weighed in on the heated subject of cultural appropriation. It’s a topic that keeps rearing its head, both in the media and on Twitter – whether it’s a conversation about M.I.A.’s new video or Kylie Jenner’s cornrows. Speaking with Nylon, the 18-year-old singer and actress stressed that there’s a difference between appreciating and appropriating other cultures. Asos Chief to Step Down 15 Years After Founding Fashion Retailer. LONDON, United Kingdom — Asos Plc, the U.K.’s largest online-only fashion retailer, said Chief Executive Officer Nick Robertson will step down, 15 years after he co-founded the business. Robertson will remain with the company as a non-executive director, London-based Asos said in a statement Wednesday.

His replacement as CEO will be Chief Operating Officer Nick Beighton. Under Robertson, Asos has grown from a startup to become a leader in online fashion retailing with annual sales of about 1 billion pounds ($1.5 billion). The CEO, who was honored with the title Order of the British Empire in 2011 for his achievements in the world of clothing retailing, holds a stake in the company worth more than 200 million pounds. “We are fortunate to have such an able successor for the CEO role,” Chairman Brian McBride said in the statement.

HUNTINGTON BEACH, United States — Quiksilver Inc., the California surfwear chain that lost 79 percent of its market value this year, filed for bankruptcy with a plan to hand control over to lender Oaktree Capital Management LP. Under a plan announced Wednesday, affiliates of Oaktree Capital Management LP will supply the chain with the $175 million financing it needs to get through a restructuring. Unlocking the Enigma of Iran. DUBAI, United Arab Emirates — Smugglers ply their trade here by night. Jeremy Corbyn latest, TUC and welfare reform bill - BBC News.

10 Influential Fashion Designers You’ve Probably Never Heard Of. A Fashion Designer Uses Her Mannequins To Send A Message That Hurts. The metrosexual is dead. Long live the 'spornosexual' - Telegraph.